One of last-generation's most creative shooters is back, faster and prettier than ever.

Six years is a long time in the games industry. It's the difference between Halo: Combat Evolved and Halo 3, between the first Assassin's Creed and AC IV: Black Flag, between Demon's Souls and Bloodborne. It's also the difference between the original Bulletstorm and its recent rerelease as Bulletstorm: Full Clip Edition, a visually-upgraded but otherwise identical port of the sci-fi FPS to PS4, Xbox One, and PC. With no changes made to the gameplay itself, you might expect Bulletstorm to feel dated in the harsh light of 2017. The reality is quite the opposite. Six years on, Bulletstorm feels as fresh as ever, its creative skillshot system still unique in the shooter space. Full Clip Edition might not add a whole lot to the original game, but any excuse to revisit one of the most creative shooters of the last generation is a good one.

For those who didn't play it back in 2011, Bulletstorm might seem at first glance like your typical corridor shooter. Its single-player campaign funnels you through one linear environment after the other, your goal rarely more nuanced than 'shoot everything that moves.' But while its basic framework is nothing special, Bulletstorm quickly distinguishes itself with its arcade-style skillshot system that scores you based on how creatively you dispatch your foes. Booting an enemy off a ledge, for example, will net you the 50-point Vertigo skillshot, whereas launching an enemy into the air, killing one of its comrades, then finishing off the first foe before it hits the ground will award you the 100-point First In Last Out skillshot.

As you progress through the campaign, new weapons will unlock even more complex skillshots. Using the flailgun, you might lasso one enemy with an explosive bolo, kick them into a group of their comrades, then remote detonate the bolo to take out the whole group for a Homie Missile skillshot. Or perhaps you'll use the cannon-like Bouncer to ricochet a cannonball around a corner for a sneaky Trickshot skillshot. The opportunities for creative carnage abound.

While racking up points is satisfying on its own, what makes the skillshot system so compelling is the thrill of discovery that comes with it. Other than a few basic environmental kills tutorialised early on, you're left to uncover the vast catalogue of skillshots on your own, experimenting with the tools at your disposal in search of ever-more bombastic combos. Building up your arsenal of violent kill tactics feels empowering, tapping into the joy of collecting as much as the macabre curiosity of finding new ways to obliterate your enemies. 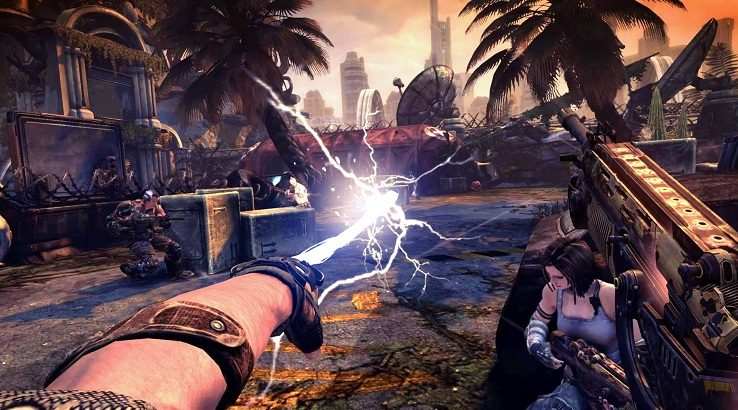 Of course, none of this would be worth a damn if Bulletstorm didn't shoot well. Thankfully, the running and gunning is just as exhilarating as the creative mutilation, due in large part to three core abilities the game provides you with: kicking, sliding, and leashing. The first two are simple enough, turning your boot into a meaty catapult capable of launching enemies into the rebar spikes and electrified cables that litter the environment. The leash, though--the leash is undoubtedly Bulletstorm's deadliest weapon.

Basically a giant whip made of pure energy, the leash completely rewrites the rules of the battlefield. Out of assault rifle ammo? No worries; just leash a long-distance enemy and yank them into range of your four-barrelled shotgun. Frustrated by your foes always huddling behind cover? Simply let loose with the leash's Thumper attack to bounce your enemies into the air and pick them off as they fall in slow-motion towards the ground. With the leash in hand, the battlefield is your playground, the environment as much a weapon as any of your guns.

The combination of leashing, kicking, and sliding gives Bulletstorm a sense of speed and brutality few other shooters can claim. When you're sprinting across a ruined courtyard, booting your foes into explosive barrels and whipping helicopter pilots out of their cockpits, the action takes on a flow similar to the parkour in Mirror's Edge. The screams of dying enemies form a chorus of chaos, the thump of your boot on their chests building a rhythm that resonates deep within your bones. For as brutal as it all is, there's a beauty to the seamless evisceration of one enemy after another. 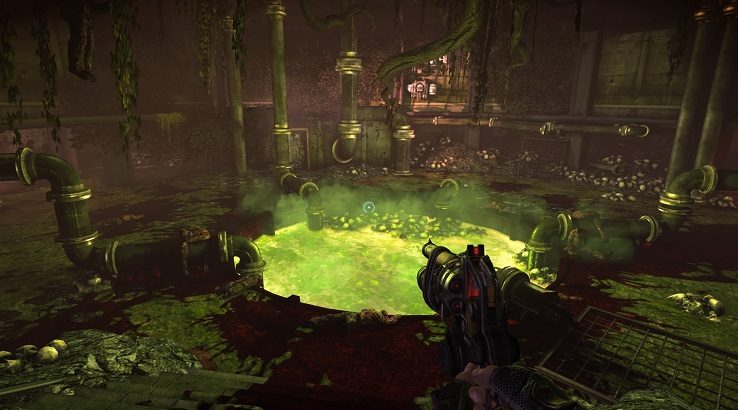 Sadly, Bulletstorm isn't all sunshine and skillshots. The game's narrative is a dull one, framed around a generic revenge tale plagued by all the poor decisions and predictable betrayal you'd expect. Far worse, though, are the characters stringing the story along. Imagine the most noxious bigot you've ever met, give them a gun and a license to kill, and you're probably about halfway there. From an alcoholic space captain with only the slightest hint of empathy for anyone but himself to a foul-mouthed general who seems intent on cramming as many immature insults into every sentence as he physically can, Bulletstorm's cast is aggressively unlikeable.

Needless vulgarity infests every line of dialogue in the game. Listing the most inane here would be both impractical and offensive, but a few choice examples are "limpd*** re****", 'I'll kill your d***", and "He's got a murder boner." On their own, these lines could be written off as poor attempts at humour, but the sheer abundance of casual swearing, graphic insults, and unwarranted aggression can't be ignored. The game even asks you whether you want to censor the worst of it when you first boot up the game. Crude language certainly has its place in establishing a mature, gritty tone, but Bulletstorm revels in it so excessively that it loses all impact.

Because of this, Bulletstorm often feels like a game at war with itself. On the one hand, it's a gorgeous sci-fi shooter steeped in lush environments and spectacular set pieces that put Call of Duty to shame. On the other hand, it's a juvenile power fantasy full of genital jokes and the kind of swearing kids mistake for a sign of maturity. This confusion of identities makes Bulletstorm a messy experience, every moment of frenetic action marred by a cringe-worthy quip or tasteless joke. It's a disappointing stain on an otherwise exhilarating shooter. 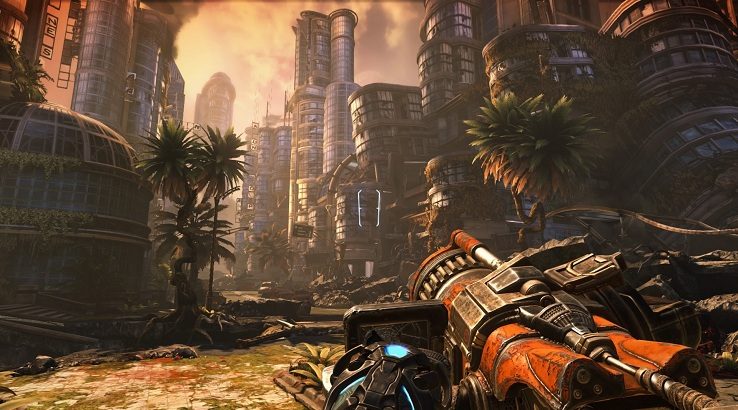 If you can look past the excessive language and immature attitude, Bulletstorm is a fast and furious ride that still feels as fresh as it did back in 2011. Even if Full Clip Edition feels a little rich at the price of a new game, especially considering the price of similar visual remasters, Bulletstorm remains a benchmark in creative shooting that other FPSs could learn a lot from. Let's just hope they sit up and take notice this time around.

We reviewed Bulletstorm: Full Clip Edition on PlayStation 4 with a copy provided by the publisher.

It's testament to both Bulletstorm's creativity and the state of modern FPSs that Full Clip Edition feels as refreshing as it does. Whipping enemies into the air and booting them into walls, spikes, and each other remains as satisfying as ever—just do yourself a favour and mute the dialogue before you jump in. It'll make the whole experience much more enjoyable.

Yooka-Laylee Review: Fun, but not quite finely tuned Little Nightmares review: The new indie dying to meat you