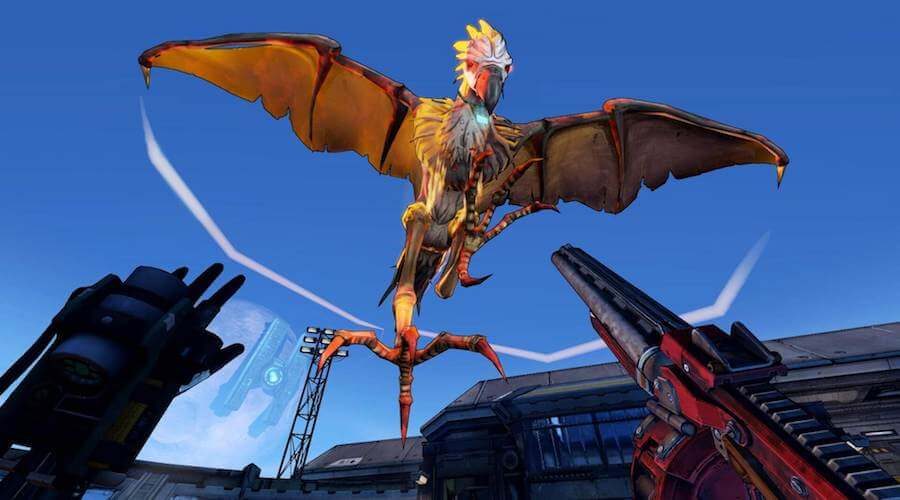 Gearbox trims back Borderlands 2's co-op and DLC for the PSVR port.

"Get Ready to Joy Puke Your Face Off!" was the 2012 marketing line that came rushing back to me when I first heard Borderlands 2 was coming to VR. On the one hand, you've got to welcome Gearbox's loot 'em up as a welcome addition to the PSVR's woefully thin library of games. On the other hand, everybody knows that many folks do not fare well on shooters in virtual reality; "first-person spewer" could be a sub-genre all its own. Be that as it may, I braved 30 hours in a Matrix of motion-sickness to see if any gaming gold remained in this old Pandoran vault.

Before we excavate further, let's get a basic description of Borderlands 2 out of the way for the newcomers. Released mid-last generation, and remastered fairly recently for this gen, Borderlands 2 is a shooter that stands the test of time remarkably well. Part of this can be attributed to a cel-shaded aesthetic that suits the visual limitations of VR, plus there's also a side-splitting campaign lashed to a loot-scooping gameplay loop. Basically, even after half a dozen years Borderlands 2 has the power to be as addictive as heroin pancakes.

This is mainly because you'll almost never pick up the same boomstick twice. A procedural system will feed you 87 bazillion attitude-adjusters and make you blow dozens of hours as you scour the incredibly hostile planet of Pandora in search of unique pistols, SMGs, assault rifles, sniper rifles, shotguns or rocket launchers. The obsession gets real rather quickly. Expect to feel "gat proud" when you finally farm a legendary drop, like an SMG that (magically) fires eight bullets out at the cost of three while also electrocuting your enemies and dishing hellacious corrosive damage. No word of a lie: I became so attached to my pistol in this game I called her Gladys. 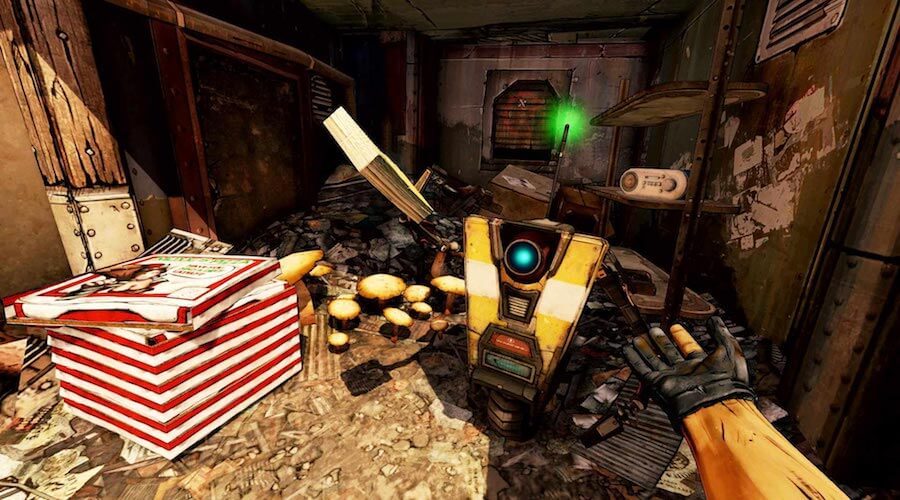 In the rare case that being a Texan-level gun-nut isn't your bag, you'll probably become addicted to levelling up one of the four class-divided characters instead. There's a vault hunter for every play-style here and mixing and matching the unique skills of a Siren, Commando, Gunzerker or Assassin in 4-person co-op feels incredibly rewarding. And you know what? Speaking of the joys of playing with others, this is where the first strike against Borderlands 2 VR comes in...

Yep, you guessed it. This virtual reality port is more solo than A Star Wars Story starring Alden Ehrenreich. I honestly couldn't tell you why that is the case, either. Excellent VR co-operative experiences like Star Trek Bridge Crew and Farpoint have already proven that shared play is quite viable on PSVR. Playing Borderlands 2 as "Neil No Mates" will undoubtedly be seen as a deal-breaker for many a veteran player, even before they've heard the insult to that injury. Disappointingly, you're only getting the core game of Borderlands 2 here. So forget about those 10 DLC packs and roughly a hundred more hours of playtime. This decision feels especially scummy as 2015's Borderlands: The Handsome Collection came with the full, butt-stallion's-load of extra missions and characters. A disc-based version of that can be picked up well below the RRP of Borderlands 2 VR. 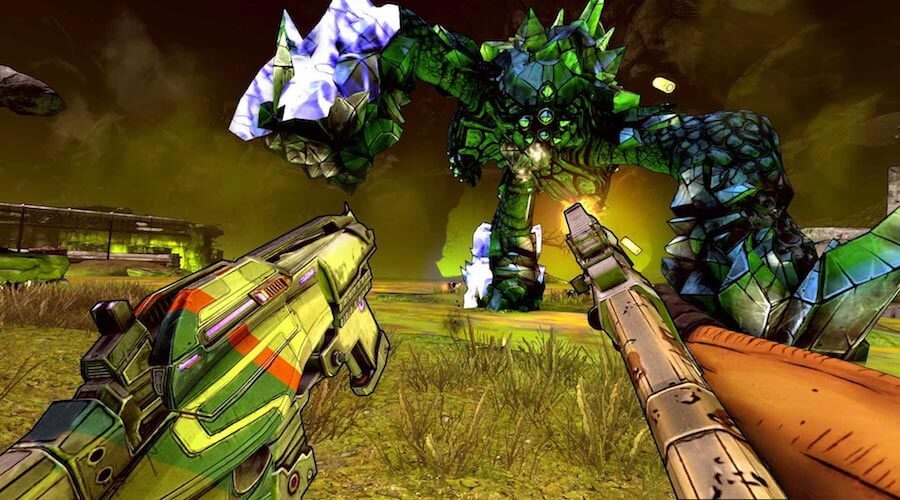 Another (admittedly smaller) section of gamers may also want to step off when they hear that this PSVR title offers no official Aim Controller support. Bundled with first-party titles like Farpoint and Bravo Team, while also being supported and used to great effect in third-party titles like Doom VFR, the Aim controller's twin sticks would be a perfect fit for a game like this. Once again, common sense didn't prevail for reasons I cannot rightly explain. There's no word on a rectifying patch either, so don't hold your breath.

What is on offer are two different control avenues: a traditional DualShock 4 option, or you can use two Move Controllers. The former basically handles movement like any traditional shooter but this time the aiming reticle is linked to your face movement. It's perfectly serviceable but I prefer the latter option that uses Sony's proprietary glowy lollipops. Double-fisting Moves will give you full, independent control of your virtual mitts (which are filled with beefy guns). Your forward locomotion can either be achieved by pushing a button to walk wherever your eyes are looking (with the face buttons used for strafing) or you can hopscotch about with a teleport function. Sounds complex in writing but you'll be a pro in ten minutes, tops. 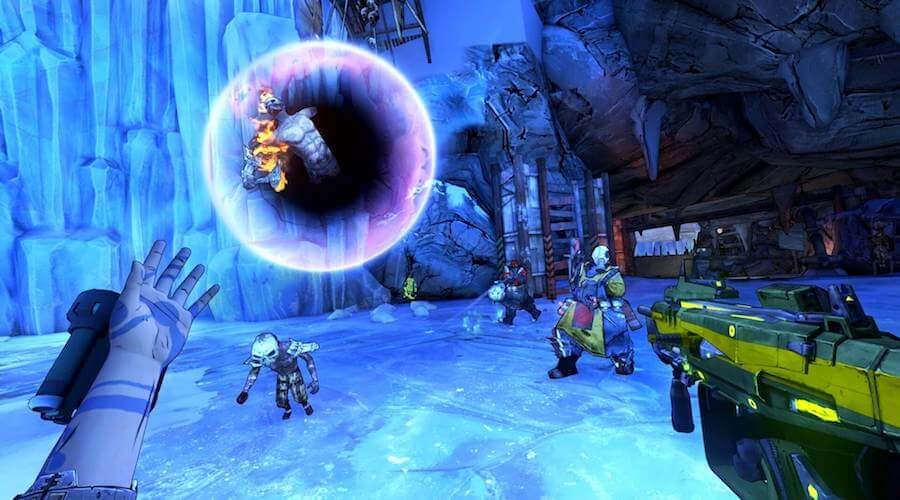 There are also a range of comfort options to ensure you don't lose your lunch while trying not to lose your life. You can toggle camera behaviours like tunnel vision, tunnel fading, avatar height and you can switch between smooth (labelled in-game as "gradual") or snap angled turning. Honestly, I could fill up an entire article on the many different control options and combinations available in the options menu for Borderlands 2 VR. What's on offer here is a credit to Gearbox and I'd honestly be surprised if you couldn't find a series of tweaks that bring your motion sickness down to acceptable levels. Hell, Gearbox even throws in a new BAMF button (read: a cooldown-restricted slow-motion mechanic) to ensure you don't get overwhelmed by mobs of enemies.

Is Borderlands 2 VR worth your hard-earned cash and 12GB of space when everything's said, done and shot in the face? Yes and no. The novelty factor of truly "being in" the madcap, ultra-violent world of Pandora cannot be denied, especially if you're brand new to the series. That said, so much potential has been squandered here. To a veteran, the tightfisted and/or half-arsed approach to content, controller support and co-op functionality is about as annoying as the Bane (perspective for outsiders: the Bane is an SMG that shrieks high-pitched gibberish when you fire it).

A perfectly fun and functional VR port of a true genre great. That said it's hamstrung by a lack of included DLC content and the removal of co-op robs this new package of the original's magic.