Blockstream buys up mining gear. What does it mean for bitcoin? 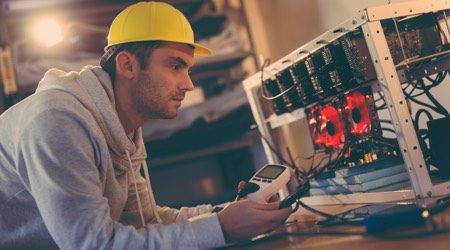 That's a lot of hashing power in one place.

Blockstream is one of the largest bitcoin funding contributors and has recently been buying up a lot of crypto mining rigs from a firm called Innosilicon, Bitcoin.com reports.

Public shipping data reveals a sizable shipment en route from China to the US, imported by Blockstream, a bitcoin company focused on developing sidechains. Four containers holding 62 pallets marked as “TI” were sent from Hong Kong and arrived on 26 July 2018 at the port of New York and New Jersey.

Bitcoin.com speculates that "TI" is referring to Terminator rigs by Innosilicon, a SHA256 ASIC miner selling for US$1,118 each. And with each pallet possibly holding up to 72 units, this could mean a purchase of up to 4,650 Terminators for almost US$5.2 million.

Blockstream has yet to announce that it is opening a new mining centre, but those rigs almost certainly won't just be wasting away as paperweights. The typical hash rate of a Terminator unit reaches 17.2TH/s, giving such a centre almost 80PH/s.

Some might see it as a promising sign for Blockstream as a tech company, but others have been alternating between critical and curious, running through some of the potential upsides, downsides and applications of that much hashing power in the hands of Blockstream.

Crypto mining is stressful, risky and a full-on business. It's unusual for a tech company like Blockstream to plonk down US$5 million on mining rigs because it ideally shouldn't need to.

"Mining rigs are call options – you buy the ability to manufacture tomorrow's coins at a particular price today – but with headaches," said Emin Gün Sirer‏ on Twitter. "You need to worry about space, cooling, procuring power, and acts of god such as floods, fires and so forth. If Blockstream will own these rigs, a tech company going into financial speculation is not an encouraging sign. Google and Facebook don't buy call options on pink sheet stocks. If your tech was good, you'd make money with that, not via speculation."

He also points out that most successful mining firms manufacture their own equipment and that most of those that don't have been squeezed out of business a while ago. Blockstream isn't a manufacturer, so any profit margins from bitcoin mining will be severely tempered next to competitors. Plus, the arms race effect of bitcoin mining means the expenditure – at a less competitive margin – will just have to continue lest that initial $5 million turn into a wasted investment.

So actually buying it to use for its own mining would be a somewhat weird move.

"This could just be part of a play where Blockstream funds and encourages a competitor to Bitmain. If so, that's good, most of the PoW coins are hopelessly centralized on the mining rig manufacturing side (as well as the software side). More rig manufacturers are a good thing," Sirer notes. "Or it could be that Blockstream is now a mining rig solution supplier to a different company. That is, they aren't going to operate these machines themselves. If so, that's a bad sign for Blockstream, as that's a relatively low margin business."

But with enough hashing power you can do things other than mining, especially with the proper technical know-how – technical know-how that the people at Blockstream obviously have. It's possible that there's a more nefarious-yet-interesting motive behind the purchase.

"Mining power in the hands of people who understand the protocol should lead to exciting times. We have not seen that many miner attacks recently, except for the recent attacks on exchanges with rented hashpower in BTG" Sirer said. "Some of the suggested designs for BCH deeply assume that all miners have the coin's best interests at heart. These suggestions are flawed, of course. Hashpower in the hands of a non-benign miner should cause people to rethink their assumptions."