The Ethereum blockchain has a rich history of being used to fight censorship.

Hearthstone is an online trading card game from Blizzard, the video games studio behind mega-hits like World of Warcraft.

In a recent Hearthstone esports competition, Hong Kong competitor Chung "Blitzchung" Ng Wai showed up on livestream in a gas mask and said "Liberate Hong Kong, revolution of our times," to show his support for the protesters.

In response, Blizzard expelled Blitzchung from the competition and banned him from professional play for a year, withdrew his US$10,000 of prize money and fired the two commentators who were on the stream with him.

Blizzard is an American company, but it also accesses a massive audience in China.

Now, in a show of support for Blitzchung, Immutable – the game studio behind the Gods Unchained blockchain-based trading card game – has offered to reimburse Blitzchung's confiscated prize money and given him a free ticket to its own upcoming tournament.

It's an apt offer on many levels.

The game uses blockchain technology to let players take personal possession of their own digital card collection. These digital cards can then be bought, sold and transferred between players without going through Immutable.

Hearthstone cards live on Blizzard's servers, and it can exercise absolute control over them. By contrast, even if it wanted to, Immutable wouldn't be able to stop players from doing whatever they want with their cards.

"Even if we disagree with your views, we can't take away your cards" it said on Twitter.

It works by letting players mint their cards to the Ethereum blockchain, a completely public decentralised computing network. This lets the card owners take personal possession of the cards, despite them being purely digital objects.

This is precisely the same principle underlying Bitcoin, and it's exactly how people can personally own and take possession of Bitcoin even though it's purely digital. By this measure, the Gods Unchained cards could be thought of as a cryptocurrency of sorts.

However, even though it's practically impossible for anyone to pull the plug on a player's card collection, Gods Unchained still hosts its own digital playing fields, where players bring their cards.

These digital playing fields came under cyber attack just a few hours after Immutable announced its offer. The attack temporarily blocked players from logging into the game (although they could still admire their cards on the blockchain) until Immutable beat it back with the help of outside security experts.

For example, this Ethereum transaction includes a statement from a Peking University student who says she was sexually assaulted, and then university officials and state authorities attempted to cover it up and coerce her into silence.

All other efforts at getting the word out failed, but now the statement lives in immortality on the blockchain. 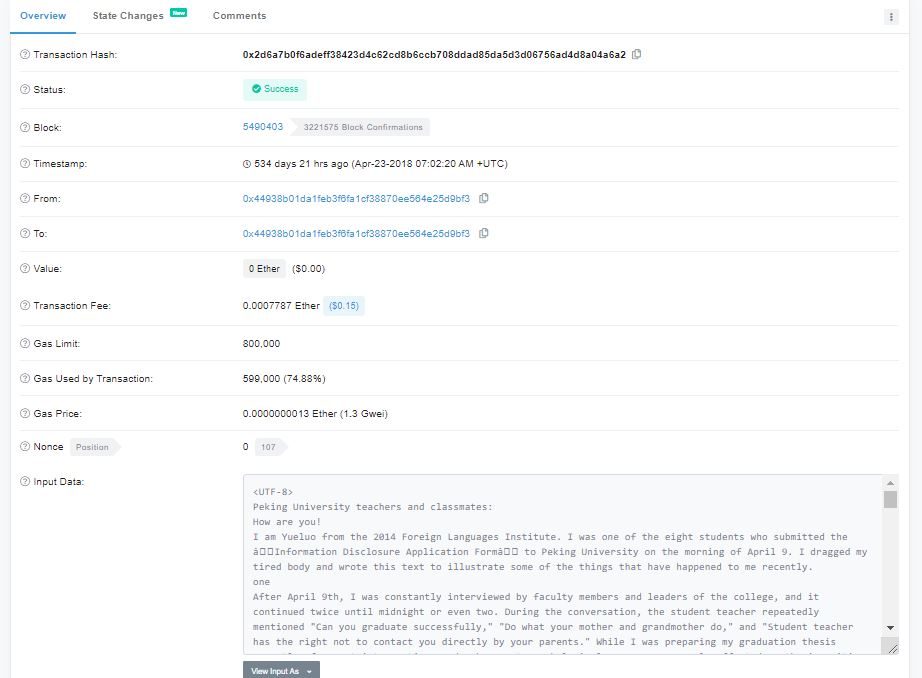 It's not the only example. This type of censorship-resistant publishing has already effected real change in other ways.

For example, this other Ethereum transaction contains the full text of a piece of investigative journalism titled King of Vaccines. It goes into a great level of detail on the history of a company called Changchun Changsheng Biotechnology, and allegations that it was knowingly distributing defective vaccinations across China.

The article was quickly scrubbed when published on Weibo, and it seemed at risk of disappearing into the same black hole that had been swallowing similar allegations, Chinese vaccination data and disease statistics for years. But now it lives permanently on the Ethereum blockchain, and a slew of arrests at Changchun Changsheng Biotechnology followed.

And now there's a new flashpoint; an Australian company supporting a Hong Kong esports athlete whose support for protestors there attracted punishment from an American company at the behest of its Chinese investors, followed by an international backlash.

Technology really does bring people together. It's probably only natural that online games, speaking the universal language of fun, would find their way to the centre of these kinds of things.