EOS 2.0 shows a system where block producers can't do much, but can charge fees for it.

EOS has had an eventful year, raising billions of dollars worth of Ether to develop the ultimate Ethereum-killer platform. But in the absence of a useful product, EOS's Ethereum killing has so far been confined to expensive attempts to sell the bottom out of the ETH markets.

EOS's vision was to bring the best side of humanity to the blockchain, with dispute resolution, customer service and all that other good stuff. In practice, this just meant sending humans to do a robot's job.

Decentralised decision-making was replaced by Block.one as a central authority to pick the 21 network nodes, and blockchain trustlessness was replaced by each block producer signing proposals with pen and paper, and dutifully uploading pictures of the results.

Any block producer who refuses to go along with proposals will be replaced by a more compliant node, which has instilled a dangerous level of mindless obedience into the nodes. At one point, someone even introduced a fake proposal to freeze 27 wallets, and the block producers just unthinkingly signed off on it without realising it was fake.

Between a rock and a hard place

This has put EOS into an unpleasant position. The most sensible changes are off-limits because they risk revealing the pointlessness of the entire EOS system. For example, just moving back to Ethereum and using a simple governance contract to more efficiently mimic the human element without the downsides is off the table because it would reveal how pointless EOS is. 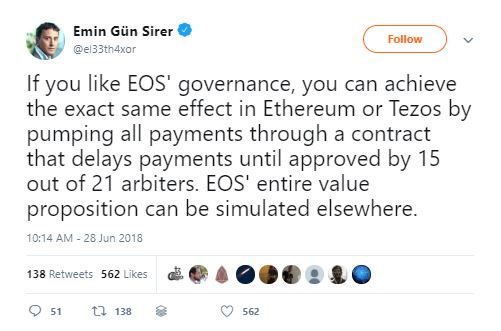 A similar effect can be seen in bitcoin, whose unnecessary spat with Bitcoin Cash has left it unable to increase block size for fear of looking stupid, even if that's the most sensible option.

The challenge for EOS is essentially to get as close to "code is law" as possible, without accidentally revealing that it has no reason to exist.

The new proposed constitution, known as EOS 2.0, basically says that there will be human arbiters in the system while reassuring people that the arbiters won't actually do anything... at least not for free.

The main difference is that this system won't let arbiters freeze accounts, move funds or otherwise get involved in that kind of dispute resolution. They can only modify contracts that are not functioning as intended. They can also charge a "reasonable" fee or impose other requirements on customers in exchange for their help freezing malfunctioning contracts.

The new EOS 2.0 constitution according to Block.one:

Can you trust EOS block producers?

The chaos of the launch strongly suggests no. As soon as they could, the block producers descended into rivalries, sabotage attempts, impersonations, scams and other not-so-great behaviour. Updating the constitution doesn't suddenly make them any more dependable, but anyone who wants to use the system will have to put their trust in a lot of eminently untrustworthy entities with an incentive to misbehave.

This constitution change will reduce the customer service load by leaving anyone who lost their funds or had their account compromised out of luck, and instead focus solely on letting block producers charge a fee for modifying existing contracts.

The value of this type of service is dubious. The most severe problem with contracts tends to be those that have vulnerabilities to allow the theft of funds, and in EOS as in Ethereum, those funds will now be gone for good whenever a broken contract is hit.

At the same time, parties to a dispute will now be able to buy a favourable verdict from the block producers, or simply buy a stalemate to prevent the rightful party from accruing the necessary 15 of 21 votes.

This system benefits no one except Block.one and the block producers. For anyone thinking of actually using the EOS blockchain, this set of terms and conditions, which looks an awful lot like an extortion license, will be tough to swallow. If a business wants to use EOS, that means putting the business entirely at the mercy of 15 to 21 unknown persons who can constantly observe your efforts and speculate that it would be a shame if someone were to freeze its contracts.

And from a sensible risk-management perspective, no large business could justify the risks of using EOS. Ethereum gas costs can be planned, budgeted for and managed around, but a human-powered blockchain like EOS is simply unpredictable and too dangerous to touch.

Effective decentralisation is well worth the slog, but it's also extremely technically challenging and only a very serious project can pull it off. There's little reason to believe EOS is one of them. It is willingly walking away from true decentralisation and making some glaring oversights on the way, such as underestimating how many scammers there are, and how much work is involved in actually serving users as customers. And from a purely technical perspective, all signs point to it being a firmly average project.