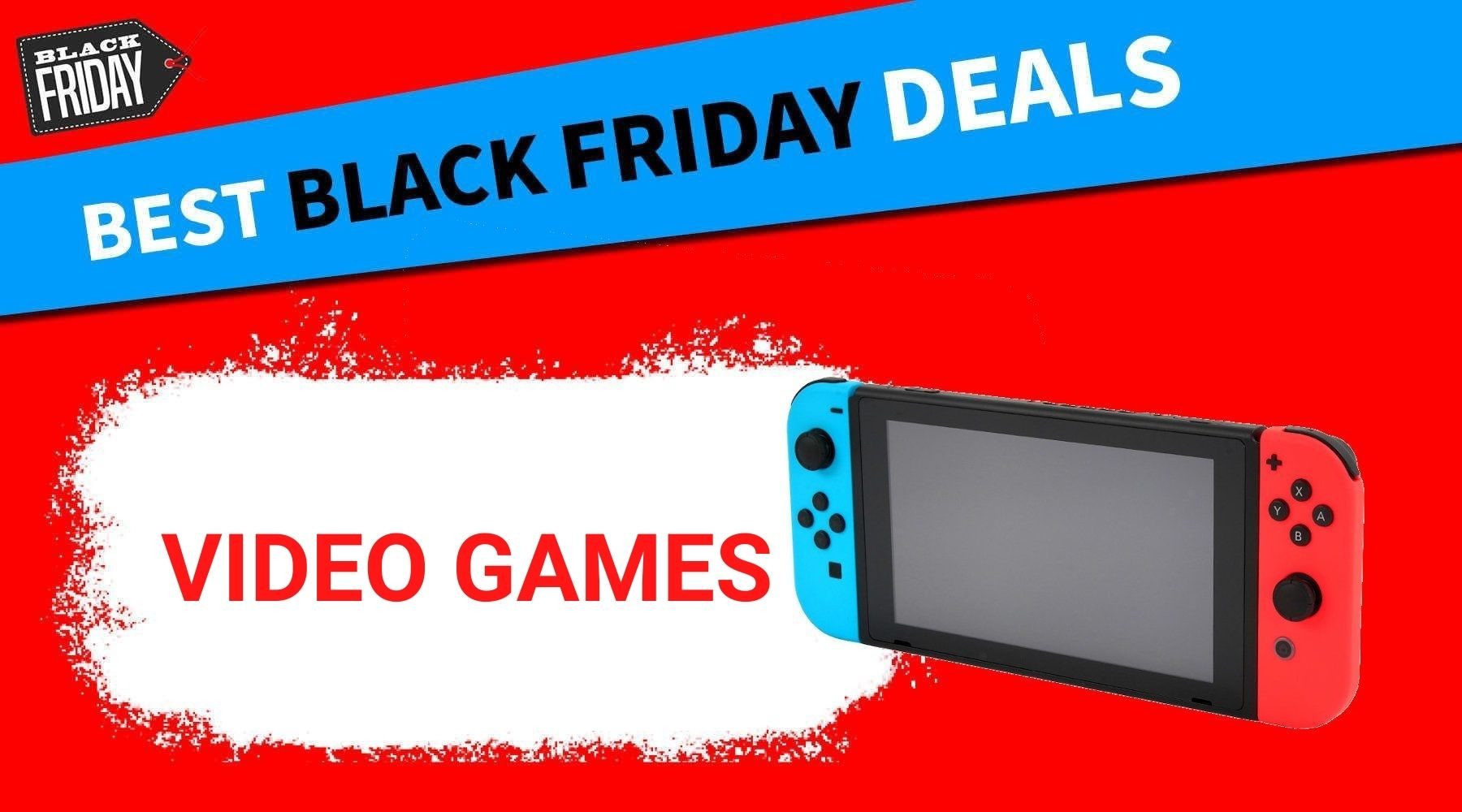 There are massive discounts on PS5 exclusives, the latest Nintendo releases and a slew of great Xbox and PC titles.

Black Friday means online retailers slashing prices on games, hardware and peripherals. Here's a roundup up of some of the best Black Friday gaming deals for 2021 across Nintendo, PlayStation, Xbox and PC.

Skip ahead to see deals for each category:

Prices correct at time of publication, but can change when Black Friday deals sell out or if retailers price match. We'll do our best to update but act fast to make sure you don't miss out!

Nintendo rarely discounts their beloved games, so Black Friday is a rare chance to grab a Switch game at a cheaper price. There are some good deals on hardware too.

The original Switch console is currently $399 down from $469. The deal also comes bundled with Mario Kart 8 Deluxe and three free months of Nintendo's subscription gaming service for a full discount of $162. Get Nintendo Switch Mario Kart bundles for $399

The more portable, handheld-only little brother of the classic Switch, the Switch Lite is discounted to $299 at Amazon. That'll save you $30. Get $30 off the Nintendo Switch Lite Console

The Legend of Zelda: Skyward Sword HD for $57

The Switch release of this Wii U Zelda title only came out recently. And you can now snag it for $57 at Amazon. Get 29% off The Legend of Zelda: Skyward Sword HD

Widely considered an instant classic and one of 2021's best Switch games, Metroid Dread is selling for 20% off via Amazon. Get Metroid Dread for just $64

But if you really want a Christmas Party game for the whole family (that doesn't involve smashing your cousin off the edge of a floating platform with a mallet) then you'll want to pick up Mario Party Superstars for $64. Play through a collection of 100 classic minigames from across Mario Party history. Remember breaking the stick on your 64 controller in 1999? Get 20% off Mario Party Superstars

How on Earth do Joy-Cons still cost more than the PS5's DualSense controller? Getting a second pair of controllers for $99 is a 17% discount though. Use them to beat your cousin (in Mario Party). Get 17% off Nintendo Switch Joy-Cons

The newly-released Switch remake of Pokémons (Pokésmon? Pokémoi?) Brilliant Diamond and Shining Pearl are available on Amazon for a 20% discount, or $64. It's time to return to the Sinnoh region. Get 20% off Pokémon Brilliant Diamond

This fun, Ancient Greek-inspired open world game is a mix of Breath of the Wild and Assassin's Creed: Odyssey. At $35 it's many hours of single player fun at a cheap price. Get 49% off Immortals Fenyx Rising

There are some solid Black Friday gaming deals on PS4 and PS5 games and hardware. But no deals for the PS5 itself, which remains incredibly hard to find.

Kill and be killed again and again until you figure this whole thing out. Deathloop is a PS5 exclusive (for now) made by a Microsoft-owned studio. $38 down from $99 is just fantastic for a game this good. Get 62% off Deathloop

In Red Dead Redemption II, Rockstar has crafted one of the richest open world games ever made. Play as Arthur Morgan, the sad horse man who likes to commit crimes and do right by his people. The year is 1899 and the era of outlaws is coming to an end. But not yet. Get 42% off Red Dead Redemption II on the PS4

PlayStation Plus: 12 Month Membership for $53

Enjoy Playstation's online multiplayer, monthly games and exclusive discounts. With a 33% discount you'll save $26 with this deal. Get 33% off a 12-month Playstation Plus membership

This controller feels so good. It is a truly next-gen upgrade over the old DualShock controllers (when developers make full use of it). How is this thing so much cheaper than Nintendo's Joy-Cons? Get 28% off a DualSense Wireless Controller (PS5)

Yes, games have director's cuts now for some reason. Ghost of Tsushima remains one of the PS4's best exclusives, and this version adds online multiplayer and the Iki Island expansion. And with a 55% discount they're literally slicing the price in half. Get 55% off Ghost of Tsushima: Director's Cut (PS4)

This game has so much football in it. And an incredible amount of physics, friction, air resistance and real-world football data. Get 55% off FIFA 22 Standard Plus Edition (PS4)

The Last of Us Part 2 is a heartfelt and grim story about the corrosive effects of violence and revenge. Not everyone liked how developer Naughty Dog told this story, but the graphics and gameplay remain powerful, intense and incredibly satisfying. And at $19 it's an easy buy for anyone still on the fence. Get 65% off The Last of Us Part 2 (PS4)

Ubisoft has done it again. A good thing or a bad thing, depending on how you feel about the Far Cry series and its trusty formula of liberating enemy outposts through a mixture of stealth, heavy weapons and vehicular explosions. It still gets me every time. Get 41% off Far Cry 6 (PS5)

The best deal on Xbox (and possibly gaming generally) remains a Gamepass subscription. And Halo Infinite multiplayer is free! But you can get some nice discounts on games for both Xbox One (the previous generation console) and the Xbox Series X/S (the new ones).

Play as a Japanese detective who has to solve a crime, get into fights, join a boxing gym and... go undercover at a high school? All within the Yakuza universe? Incredible stuff. Get 41% off Lost Judgment

A brand new Call of Duty game on the Series X for this price? AAA game pricing is a strange phenomenon but I'm not complaining. Get 26% off Call of Duty: Vanguard (Xbox Series X)

Playground Games has created possibly the ultimate video game car racing experience and a game of the year contender. This is available on Xbox One and Series X/S. The price on Kogan is listed at $74 but there's a 5% discount at checkout. Get 5% off Forza Horizon 5

One of the cheapest next-gen gaming deals this Black Friday. A great option for the gamer who wants speed and has no need for four wheels. Get 61% off MotoGP21 (Xbox Series X)

Pre-order the upcoming Halo Infinite and get 25% off. The game itself comes out on December 9 and could be the biggest game of the month and perhaps, the year. Get 25% off Halo Infinite (pre-order)

This is a big discount for the latest release in the long-running NBA series from 2K Games. Note that this is for the Xbox One but it will play on the new consoles too. Get 62% off NBA 2K22 (Xbox One)

This Black Friday has some big discounts on PC games and a plethora of discounts on headsets, keyboards and other gaming gear.

The latest Assassin's Creed game lets you play as a Viking. Lead raids against Saxon towns, meddle in politics and build your character into a fighting machine. Everyone loves the Vikings (except the Saxons I guess). Get 58% off Assassin's Creed Valhalla

Save big on this 1-3 player, co-op multiplayer sci-fi shooter. That's a lot of hyphens. Get 67% off Outriders

With Death Stranding Hideo Kojima has done it again. Done what exactly, it's hard to say. Death Stranding is a bizarre, bleak and truly unique game about delivering cargo, navigating a post-apocalypse and bringing hope. And lots of walking around. Get 78% off Death Stranding

Marvel's Guardians of the Galaxy: Digital Deluxe Edition for $68.22

Razer Kishi Controller for Android for $76

This wired gaming headset fits over the ears and comes in a colour that can only be described as Monster Energy Green. A solid colour choice for the discerning power gamer. Get 62% off the Razer Kraken Multi-Platform Wired Gaming Headset

This year, the Australian Black Friday sales will take place on Friday 26 November. While marketed as a 1-day event, plenty of retailers now start their sales early and keep them running over the Black Friday weekend.

Retailers also continue their sales or offer new deals for Cyber Monday, which will fall on 29 November.