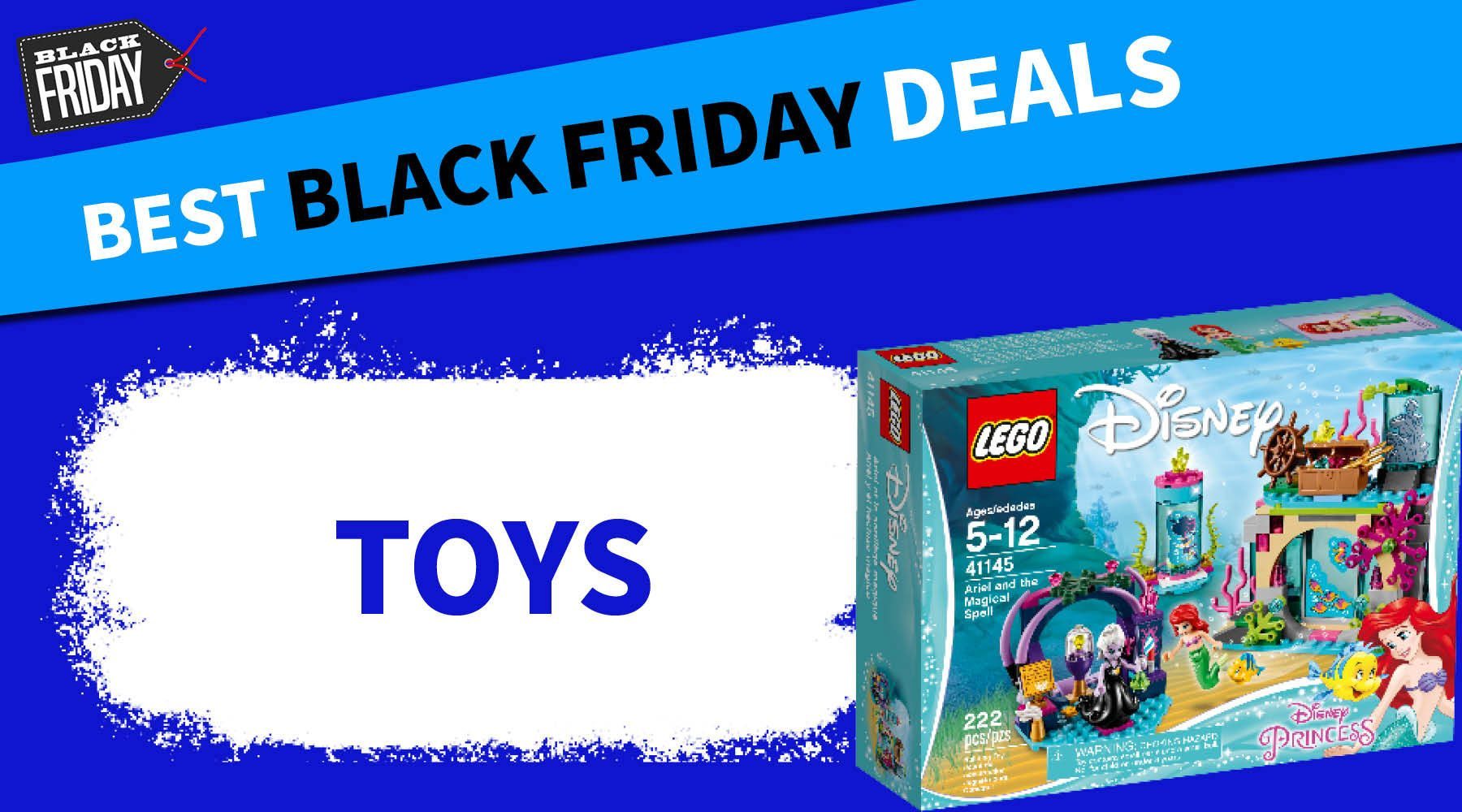 Black Friday's best deals for those stocking up on toys ahead of Christmas include Lego for 40% off, boardgames for 68% off and Barbie savings worth $50.

Prices correct at time of publication, but can change when Black Friday deals sell out or if retailers price match. We'll do our best to update but act fast to make sure you don't miss out!

Lego deals for all ages

28% off LEGO Creator Expert Assembly Square at Amazon There are more than 4000 pieces in this bad boy, which invites you to build your very own Assembly Square. It features multiple shops, a dentist's office, a dance studio, and sidewalk with outdoor café furniture. You'll pay just $269.10, a steep $130 discount from the original price of $399.99.

29% off LEGO Harry Potter Hogsmeade Village at Amazon More than 20 years after the first Harry Potter movie hit the big screen, this enchanting series is still capturing new fans – and this interactive Hogsmeade Village set allows you to get right amongst the action. Pay just $99, saving $40 off the usual price.

39% off LEGO Friends Grand Hotel Resort at Amazon: This epic LEGO Friends Heartlake City Grand Hotel set features 3 floors, 5 rooms and a ton of accessories. The Parisian-style doll's house will put a huge smile on your kid's dial for just over $100, down from $169.99.

44% off LEGO 3in1 Crocodile to Snake or Frog at Amazon Just $25 will snag this fantastic wild animal playset from lego, which offers 3 different builds: a crocodile, a snake or a frog. Each build comes with its own small animal figurine, giving your little one loads of opportunities to create and play.

40% off LEGO Art Marvel Studios Iron Man at Target One for the collectors: unleash your creative side and build lego art when you recreate IronMan's iconic suit. Once complete, add the Marvel Studios signature plate and display with pride!

Barbie deals worth writing home about

36% off Barbie 3 in 1 DreamCamper at Myer Every little Barbie fan worth their ringlets has dreamt of whisking their plastic friends off on a whimsical adventure in The DreamCamper, and here's your opportunity to make it happen. Pay just $89, a big discount from the $139.99 RRP.

Boardgames for bigs and littles

32% off Everdell Strategy Game at Amazon Everdell features a detailed world brought to life with stunning artwork, where players work to build a city of critters and constructions. This game is easy to learn but offers strategic depth to keep players engaged for the long haul. It's on sale for just $74.75 – a reduction of more than $35.

56% off Harry Potter Cluedo Mystery Board Game at Amazon In this special Harry Potter edition of Cluedo – The Classic Mystery Board Game, you become a detective to find clues and solve the mystery that awaits you, all while playing as Harry, Ron, Hermione, Ginny, Luna or Neville. You can enter special locations including Hogwarts Castle, The Forbidden Forest and Malfoy Manor, and use the Floo Network to magically travel around the board.

68% off Hasbro Gaming Monopoly Deal cards at Amazon This cheeky little card-based board game will set you back less than the cost of your morning coffee. Designed to pack the fun of the Monopoly game in a quick-playing card game, rounds typically last around 15 minutes.

45% off the Taco Cat Goat Cheese Pizza Card Game from Amazon A bit of a twist on the classic "snap", this addictive card game is as unique as its name. It's a quick and simple party game designed for all age groups, where you race against each other to SLAP a match between a card and spoken word. On sale now for less than $10.

47% off Throw Throw Burrito by Exploding Kittens at Amazon Just when you thought the game Throw Throw Burrito by Exploding Kittens couldn't get any weirder, they release an Extreme Outdoor Edition. Described as "dodgeball-style", it's a game that requires the players to jump to their feet and literally dodge the cards being thrown their way. Features hilarious illustrations by Matthew Inman of The Oatmeal fame, too.

8-inch Harry Potter Fashion Dolls for 50% off at Myer Pick up an 8-inch fashion doll with a tidy 50% discount and keep the Harry Potter fan in your life happy. Choose from Hermione, Luna and Harry or collect all three for your own little wizard party. These make cute Kris Kingle gifts for Harry Potter fans at work, too.

26% off Star Wars The Mandalorian – Baby Yoda at Amazon A touch sensitive toy, the Baby Yoda toy invites hours of interactive play. You can run your hand along the top of his head to activate sound effects inspired by The Mandalorian – including happy and excited, giggles and babbles – and if you lie Yoda down, he'll close his eyes and go to sleep. Bless!

30% off an X-Shot Fast-Fill Water Blaster Double Pack at Myer Get spare change from $15 for this fun stocking stuffer, which let's be honest, could be a winner with both kids and adults alike. It's recommended for ages 5–8, but it's a pretty fun way to cool down on a hot summer's day. And at this price, it's a bargain, too.

33% off remote contro Lenoxx waterproof crawler on eBay
The Lenoxx Waterproof Crawler is a rechargeable 4WD toy car that works with a remote control – and it's amphibious. That's right: it bounces around both on land and in water. As of 6pm Black Friday, its price drops from $59.95 to just $40.

60% off Bluey 45cm standing large soft plush on eBay For the princely sum of just $20, you can surprise your littlest Bluey fan with a large plush pooch for them to keep "for real life". It's a whopping 60% saving compared to the usual price of $49.99: note this special price is available from 2pm sharp on Black Friday (AEST).

39% off a VTech Ride & Go Recycling Truck at Myer Made from 90% reclaimed plastic, this ride-on toy is the ideal gift for toddlers to help them burn some energy. It's also a lesson in sustainability, as the red heart, yellow hexagon and blue circle play pieces represent plastics, metals and paper that your little one sorts into the correct bin.

33% Disney Princess Royal Horse And Carriage at Myer Myer is slashing a massive $100 off the price of this incredible horse and carriage, which is suitable for pre-schoolers. It features fun Disney Princess sounds, a spacious glove box, a beverage holder, and the doors even open and close.

37% off a Kids ride-on Go Kart from eBay This kids ride-on pedal powered Go Kart (also known as a Racing Buggy) will have your kids burning off energy on Christmas Day as they wheel up and down your driveway. It's suitable for 3–6 year olds and won't even break through the $100 mark once the Black Friday sale starts at 6pm(AEST).

AncestryDNA's popular DNA testing kits are selling for $85 during Cyber Monday sales. That's $45 off the RRP.

Australia's best Cyber Monday deals for 2021 include $200 off Dyson vacuums, 25% off Nintendo Switch and 30% off Apple Airpods.

Don't miss these MASSIVE Cyber Monday deals for Nintendo Switch games and consoles, including over $160 off console bundles.