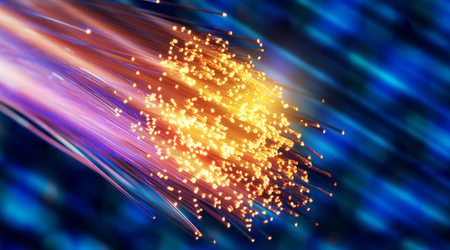 All of nature's most toxic creatures have clear warning signs. Bitmain is no exception.

On paper, Bitmain is a rare crypto unicorn, able to corner the markets through the hard-nosed domination of the entire cryptocurrency supply chain by building and using its own miners while also selling them on to third parties for extra profits.

By some estimates, this model netted it US$3 to $4 billion in 2017 – more than established chip makers like Nvidia.

But data revealed ahead of its IPO, along with other analyses, shows that the company might be in a much tougher spot than the 2017 figures would suggest and that it might be reeling from bad cryptocurrency gambles, underperforming hardware and the prolonged cryptocurrency market slump.

Bitmain's biggest problem might be its enormous Bitcoin Cash stash, which may have gone off and started to smell more like a liability than an asset.

The below image is a slide from Bitmain's pre-IPO slide deck, which found its way to Twitter. The three column headers in blue from left to right are quantity, average price acquired at and current value measured in thousands of USD. 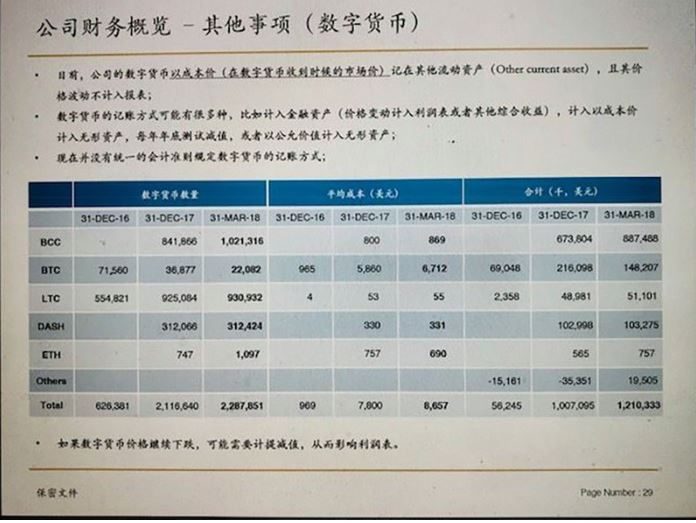 Even back in March, this was a net loss for Bitmain, with BCH being somewhere in the upper $600 range at the time. Now, it's under $500. There's a similar story for most other coins, showing just how hard Bitmain has been struck by the prolonged downturn.

To add insult to injury, Bitmain bought a lot of BCH shortly after the fork using the bitcoin Bitmain had accrued over the years. Note the declining bitcoin holdings, which halved from about 71,500 at the end of 2016 to 36,000 a year later, then 22,000 by March 2018.

But Bitcoin Cash is especially problematic for Bitmain, well beyond its leaking value.

The value of that much Bitcoin Cash in one place is dubious. Having $800 million worth of bitcoin isn't much of a problem because it can be disposed of over the counter (OTC) at a reasonable price without too much trouble. But the market for Bitcoin Cash is much smaller, and as far as anyone knows, there's no conceivable way of cashing out that much BCH without doing some permanent damage.

This means the on-paper value of those BCH holdings will have to remain on paper. It seems to have cashed out a couple hundred thousand BCH since March, but that's just a small dent in its unwanted holdings, and the lack of liquidity may have given the BCH markets indigestion as they struggle to work through it. Disposing of the remaining 600,000 or so is almost certainly out of the question and won't be possible for the foreseeable future.

The really painful part might be that Bitmain is responsible for a huge chunk of the Bitcoin Cash hash rate, and it can't withdraw that mining power without leaving BCH vulnerable to a 51% attack. Given the bad blood between the more fanatical BTC and BCH supporters, such an attack will almost certainly happen as soon as it becomes possible. If it does, the value of Bitmain's BCH holdings will plummet further.

This locks the company into a position where it's forced to spend large amounts of time, money and energy mining on the Bitcoin Cash blockchain, only to get rewarded with BCH that it doesn't really want and can't even cash out.

It's made a half-hearted attempt at encouraging people to burn mined BCH to drive down the total supply and hopefully help prop up prices, but so far only a total of 60BCH has been burned through the initiative having almost exactly zero impact one way or another.

Another slide presented in the pre-IPO gives a wider picture of Bitmain's assets. It's not a pretty picture either. The brown-coloured "other assets" section is mostly BCH that can't be disposed of, leaving inventory and prepayments as the main holdings. 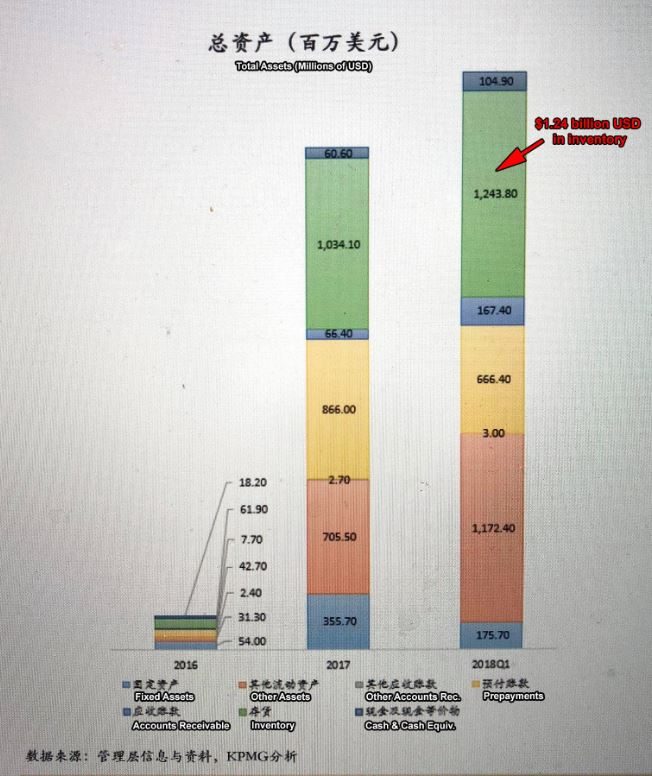 Inventory, the big green section, probably isn't doing so well either. Unconfirmed reports suggest that Bitmain's latest chips have failed hard, while common knowledge holds that at best its inventory value is suffering. Sales of new machines still seem strong, but are being marred by reports that Bitmain has misled buyers and is even chop-shopping its own old machines for parts to use in new ones.

But new machines or not, Bitmain's bread and butter is still the Antminer SHA-256 series, and the most recent of the bunch, the Antminer S9, is quickly losing value with no functional replacement in sight.

The graph below shows the price history of the Bitmain S9 from third-party retailers on Amazon for the last 12 months. 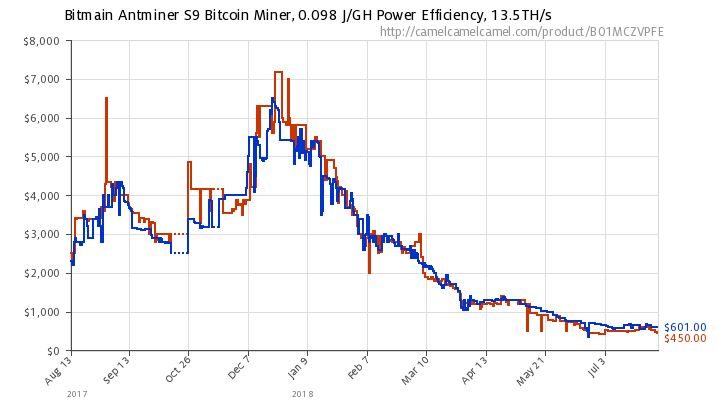 In recent months though, starting almost exactly at the end of Q1 2018, the demand seems to have evaporated, and the red line consistently peeks out under the blue. Now it's a buyer's market without much demand for the machines.

There's no SHA-256 replacement for the Antminer on the horizon, and other machines are being marred with issues and reduced profitability. The main reason for this is probably that the price tag on mining machines is a perfect match for cryptocurrency prices, and supply and demand rises and falls with it. That big green $1.24 billion inventory block is probably suffering from a loss of value and lack of demand almost as much as Bitmain's BCH holdings.

The same thing is probably happening to the third big asset group – those $666 million of prepayments in yellow. It might also be closer to zero by now, even assuming there's no double-counting going on between the inventory held and customer prepayments for that inventory.

It's important to note that there is often three or four months between a customer making their prepayment and receiving their machine. It's likely that most of that $666 million in prepayments came from customers who paid it around January 2018, during peak crypto mania. Q2 almost certainly drew only a fraction of the prepayments.

It explains a lot

Bitmain is only reporting on Q1 2018 figures, and even those show a company stuck on a very uncomfortable throne. The markets were even less kind in Q2 and it's reasonable to assume that the three months until July were financially disastrous for Bitmain. And it's only gotten harder and less profitable since then.

Now Bitmain is now planning an IPO with the aim of raising billions more. The timing almost certainly isn't a coincidence.

Based on the available information, Bitmain's holdings seem to be largely smoke and mirrors, while its revenue streams still lean almost entirely on the simultaneous success of specific cryptocurrencies and its other operations.

This hasn't stopped private investors from pouring millions into the company, but Bitmain might need a lot more zeros on those cheques if it wants to live long enough to get back in the black.