Bitcoin vs Bitcoin Cash: what to buy? 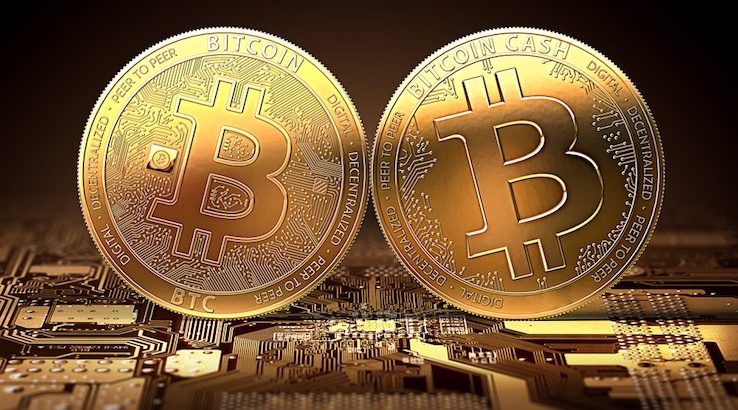 Bitcoin Cash (BCH) has surged over recent days, roughly quadrupling in price to around US$2,500.

Its gain has come at a loss to bitcoin (BTC) which has dropped in price over the same period.

There is speculation that the shift comes as the result of the cancelled B2X bitcoin fork.

That fork, which would have increased the block size to 2MB and improved flagging transaction times, was seen by some as a necessary step to sustain bitcoin’s price growth.

An increased block size would have made it more profitable to mine, while speeding up transaction times.

Bitcoin Cash, by contrast, already has a relatively large 8MB block size, and much quicker transaction times. Forbes reports that the latest price jump has actually made it more profitable to mine BCH rather than BTC, despite each coin still not being worth as much.

This has some speculating that BCH will be taking over in the future.

BCH is also implementing further technical upgrades, which might be attractive to BTC investors that are frustrated with the slow-seeming BTC upgrades, and were counting on the B2X fork.

To buy or not to buy?

Bitcoin Cash proponents say that BCH might become the new bitcoin, and suggest that its better transactability will continue to win over users.

As long as it's more profitable to mine, more hashing power may also move from the BTC network to BCH.

This might further hinder BTC, and further increase BCH growth.

BCH opponents point out that prices have fluctuated before, and say that miners will move back over as soon as BTC rebounds. Some also suggest that investors are using the disruption from the cancelled B2X fork as an opportunity to "pump and dump," and point out that the relatively low initial price of BCH, combined with the disruption of the cancelled B2X fork, makes for a perfect opportunity to buy up and escalate the price, before selling for a quick profit.

For investors, the question might be framed as whether BCH will go the distance.

On the one hand the B2X fork got a lot of interest in the BTC community, and a lot of people might have "made the switch." BCH has similar technical advantages, and it's reasonable to assume that its prices would rise following the cancelled fork.

This is backed up by the BTC price drop corollary.

On the other hand, BTC has rebounded before, and proved to have almost bottomless interest from investors.

BCH might have the technical chops to take over, but BTC has bounced back from every challenge so far.

It's not clear which way the competing coins will go, but it's safe to say they'll both be very volatile in the coming days and weeks.

There are reasons to get behind either.

To date, BTC prices have always rebounded, and often end up higher than before. But there's clearly a lot of interest in the technical benefits of BCH, and it might be one of the more promising bitcoin competitors.

Where to buy Bitcoin Cash

At the time of writing, providers who allow the purchase, sale or trade of Bitcoin Cash in Australia include CoinSpot, Bitfinex and CEX.IO.

Take a look at our complete guide to Bitcoin Cash for a full list of exchanges that support BCH.

Note: Investing is always a risk – cryptocurrency perhaps more than most. There is no guarantee of returns and nothing in this article should be taken as an investment recommendation or financial advice.