A high risk hedge: Bitcoin satisfies when the mood is simultaneously greedy and fearful.

Right now Bitcoin is walking around like it just finished an intensive workout session, which it did. Over the last 24 hours, it's felt the burn, rising roughly 20% to $9,200 at the time of writing.

Despite the burn, Bitcoin is feeling really refreshed right now. It's feeling fit, crisp and limber. The sun is shining, the birds are singing and the man on the radio said FOMO was coming back to town.

It's just one of those days, ya know?

Bitcoin's joyous attitude today is likely down to the perfectly ripe set of circumstances around it. One of them, which we'll mention first just to get it out of the way, is the halving due a couple of weeks from now. Supply goes down, money goes up. You know the drill.

Another likely factor is the particular combination of greed and fear that's currently making its way around the world.

Right now the world is simultaneously greedy and fearful, and it's at the exact midway point between them that you'll find Bitcoin downing a protein shake.

When last month's crash came in, Bitcoin showed its true colours as a risk-on asset that correlates with equities. That correlation remains intact.

On the greed side of things, global markets are leaning risk-happy, with stocks overall rising on some promising-looking coronavirus drug trials and largely uneventful earnings calls ("things are bad, but we're hoping they'll stop being bad soon, here's a pie chart") from the market giants.

Gold wilted slightly at the same time, with traders collectively judging this to be a time to take risks rather than play it safe.

Meanwhile, the US Federal Reserve just said it would keep interest rates near zero, while re-committing to using its "full range of tools" to prop up the economy if needed – just in case.

When you have a crash like this, combined with the Fed's promise to keep propping up the markets whatever it takes, greed arrives to the benefit of risky high-returns assets like equity and Bitcoin.

"We will continue to use these powers forcefully, proactively and aggressively until we are confident that we are solidly on the road to recovery," said chairman Jerome Powell.

"The road to recovery"

We haven't even properly recovered from the 2007 GFC yet, and now we're preparing to fabricate our way out of the corona-nomic crisis, whatever it takes.

It's a commitment which will never end.

The US GDP dropped 4.8% in the first quarter of 2020, and economists are predicting worse to come.

"Following ten years of continuous growth, the longest US economic expansion has ended," wrote chief US economist for Oxford Economics, Gregory Daco, in a research note. "While the 4.8 percent annualized plunge in real GDP is the sharpest contraction since 2008, it will pale in comparison with the near-40 percentage plunge in Q2."

We can re-open all the bars and factories we want, but when people have no money they have nothing to spend. This is an economic crisis, and it's not going to end overnight.

While some of that central bank stimulus is trickling down to where it's needed, we're really just throwing pennies into a pit.

Firstly it's just not enough to plug the multi trillion-dollar hole of unpayable debts and missing safety nets.

Secondly, the vast bulk of the stimulus payments are finding their way back to the banks, via people adding it to savings or paying back debts, or going to the essential businesses ("everyday expenses") that are still running throughout the pandemic, according to a UBS Research survey. 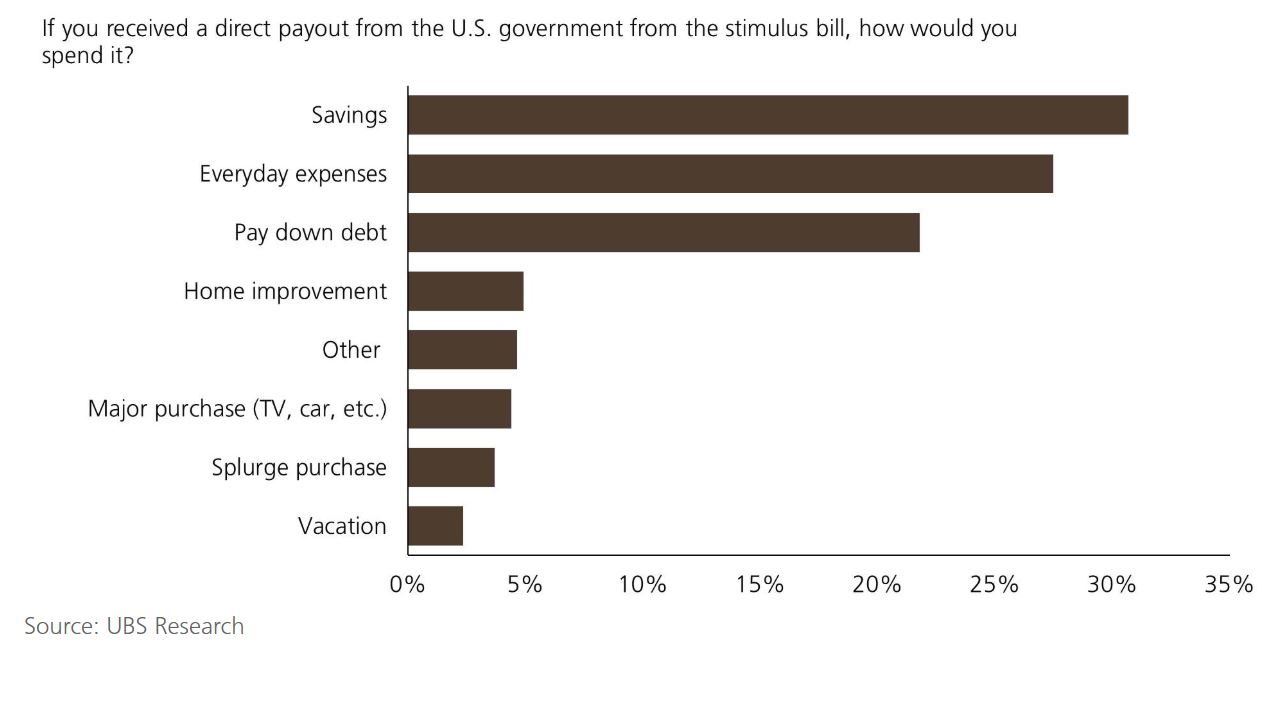 And a new Axios survey has found that 89% of Americans are either "somewhat," "very" or "extremely" concerned about US economic collapse. The disconnect between the stock markets and reality has become palpable.

For those who have it, the streets are awash with money, the markets are full of bargains and it's a great time to be greedy. But the fear remains that there is no actual plan for recovery, except to just keep printing money in a desultory fashion, bailing out corporations and drifting stimulus cheques downriver until everything just somehow works itself out.

When people are feeling greedy they buy stocks. When they're feeling fearful they buy gold.

But when they're scared of the global economic outlook and because the stock markets have started resembling a Ponzi scheme, even as everyone's making money hand-over-fist all around them, they buy Bitcoin.

It's a high-risk high-return asset that satisfies greed, while also being a hedge against fiat currency and other weaknesses in the global financial system, to satisfy the desire for a safe haven.

The recent earnings reports and Federal Reserve announcement helped throw the situation into perspective, and that could be why Bitcoin rose now, instead of any other day.