Bitcoin tripped and fell hard during its fourth run at the resistance levels under $10,000.

Ebullient trends pre- and post-halving saw Bitcoin prices buzzing around the upper US$9,000 range, waiting for a clean break to head up into the next bull season. Despite drawing back after multiple runs at US$10,000, traders remained perky, citing a record-breaking month at CME Bitcoin futures trading and multiple technical indicators.

The "Puell multiple" in particular or THE PUELL MULTIPLE! as it's more properly known, which is based on the daily value of newly issued Bitcoin divided by the 365-day moving average of daily issuance value, retreated to its lowest level since January 2019. It's essentially a measure of miner profitability at current Bitcoin prices. Whenever it falls down it has historically indicated an impending price rise.

Elsewhere in technical analysis, more conventional indicators such as the RSI and MACD raised suggestions that Bitcoin would float past US$10,000 without breaking a sweat. And of course, the old stock-to-flow model continues suggesting that Bitcoin is priming its engines for lift-off.

Bitcoin was humming along like a well-oiled machine, approaching the US$10,000 price range again and again with seemingly limitless energy.

But then, the sun disappeared behind the clouds. Bulls nervously tamped the earth and under the grey light, they pricked their ears for the telltale roar of the bears.

But it was too late.

"Rekt!" roared the bears as they charged. 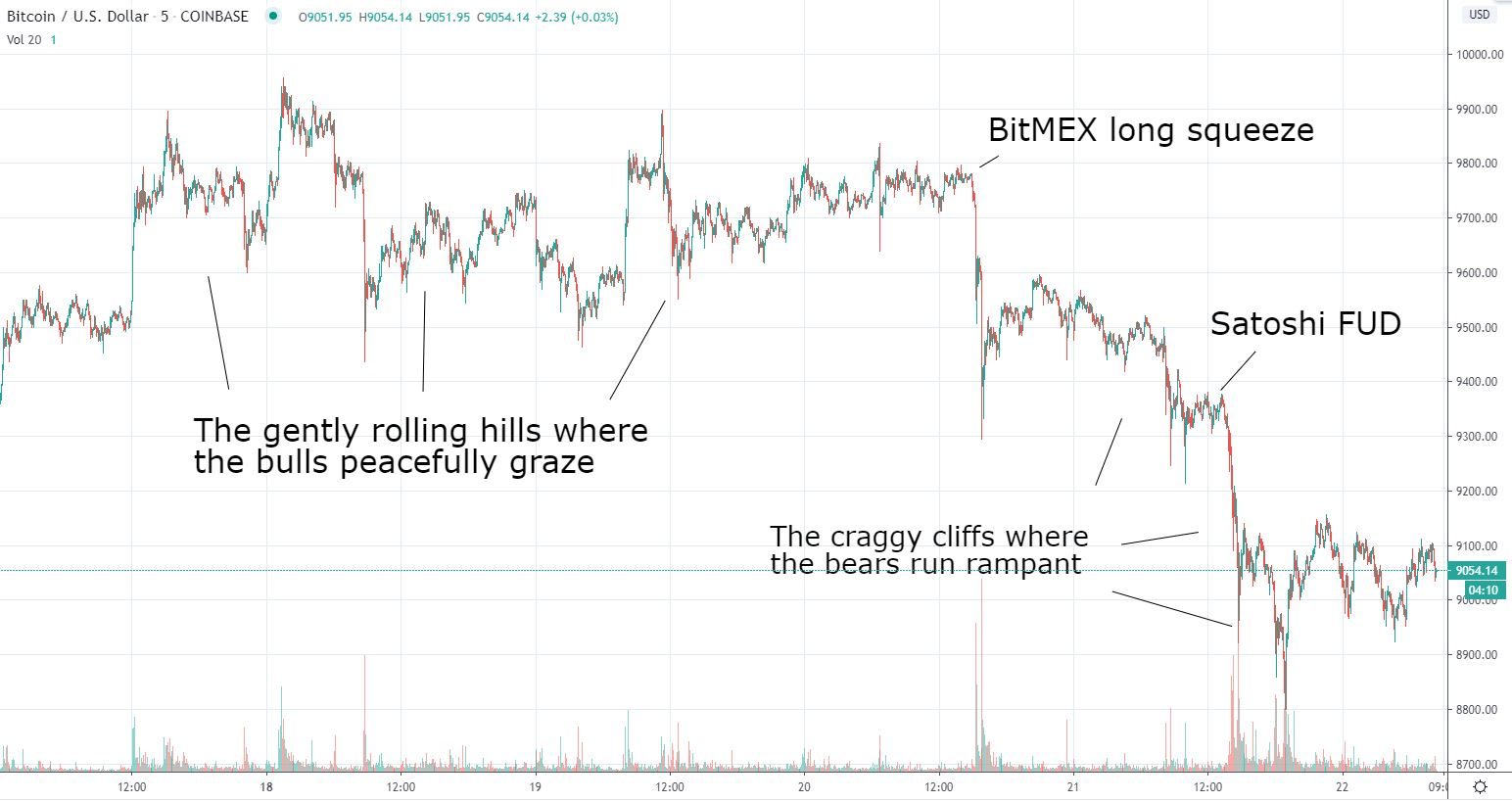 All seemed well as Bitcoin took its fourth run at US$10,000, but that time it tripped and fell hard, triggering a cascading long squeeze on BitMEX. Essentially, there were a lot of long positions in play, so when Bitcoin prices unexpectedly dropped at this point, a lot of those positions started getting liquidated. This forced traders to sell more Bitcoin to cover their losses on those positions, resulting in a quick, cascading price slide.

The root cause here appears to have been an optimism overdose as Bitcoin rebounded.

The table was set for a strong run so traders piled it high with long positions, inadvertently turning it into a powder keg that exploded when Bitcoin failed at the fourth attempt on US$10,000.

Prices started rebounding until the bears gave it a follow-up in the form of some Satoshi FUD. Basically, an old wallet from 2009 stirred to life and started throwing around Bitcoin, which scared a lot of people, quite understandably given how much money is locked up in those old wallets and how quickly it could devastate the market if let loose.

Although subsequent analysis said it's probably not Satoshi, it's widely reckoned that the coin movement was being weaponised to stir some FUD into the markets and cause further price declines.

If so, it seems to have worked.