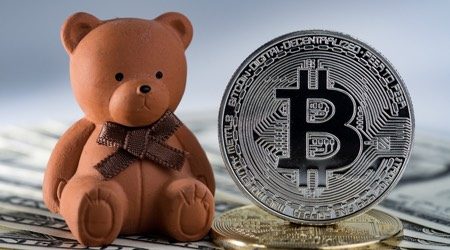 Bitcoin dropped 11% in just eight hours of trading on Saturday, and then fell even further before a minor recovery today.

Bitcoin looked like it was holding nicely through most of last week before someone lit a big red candle that saw the price plummet in just a few short hours. The price was hovering around the US$6,750 market for most of last week, but on Saturday morning Australian Eastern Time, things got very ugly very fast.

A small dip of around US$80 precipitated a massive plunge that saw the price crash to around the US$6,000 mark. And while traders breathed a sigh, thinking that the worst was behind them, another US$200 was rubbed off the value on Sunday afternoon.

Trading volumes got close to the US$5.2 billion over a 24-hour period during the selling that accompanied the price crash but sat around the US$3.4 billion mark during quieter moments during the week.

The big question traders will be asking is "Have we hit the bottom?" An analyst at Trading View says they're expecting "longs to be stacked over this week to further enforce my opinion that this is not the bottom". So, there could still be some more pain even though there are some bulls in the market that are determined to keep the price above US$5,000 in his view.

There seems to be resistance to moving above the US$6,750 level at the moment. That's supported by analysis by Mr Top Step who says there's still downward pressure in the market with the short-term recovery hitting resistance at US$6,250 and US$6,300.

When we look at the overall trend for BTC, the 100-day simple moving average (SMA) is well under the 200-day SMA, indicating that we've been in an overall downward trend for a while now. And that's a trend that seems to be holding firm.

Despite this massive fall, which has followed a month of bearish activity, Brian Kelly from BKCM LLC said to CNBC, "It doesn't mean that bitcoin can't go lower. But this is by no means the funeral for bitcoin."

Although not many analysts are linking these events, it's interesting that the recent hacking incidents on exchanges and the issues EOS has had with its platform are occurring right when the market is in a major bearish trajectory.

In addition, there may be other factors hitting bitcoin. As my colleague put it:

Bitcoin's ongoing drop might be attributed to the same shortcomings it has always grappled with, and a refreshing sign that the markets are starting to grow up and move in line with project fundamentals rather than pure hype.

Perhaps the combination of events and a realisation that while BTC might have been first, it might not be the best could be behind the market's current outlook. If that's the case, then we should see some separation happen in the market.

Coins that have a robust platform and solve specific problems will persist and others will fade away. Where bitcoin falls in that continuum is what we're all waiting to see.