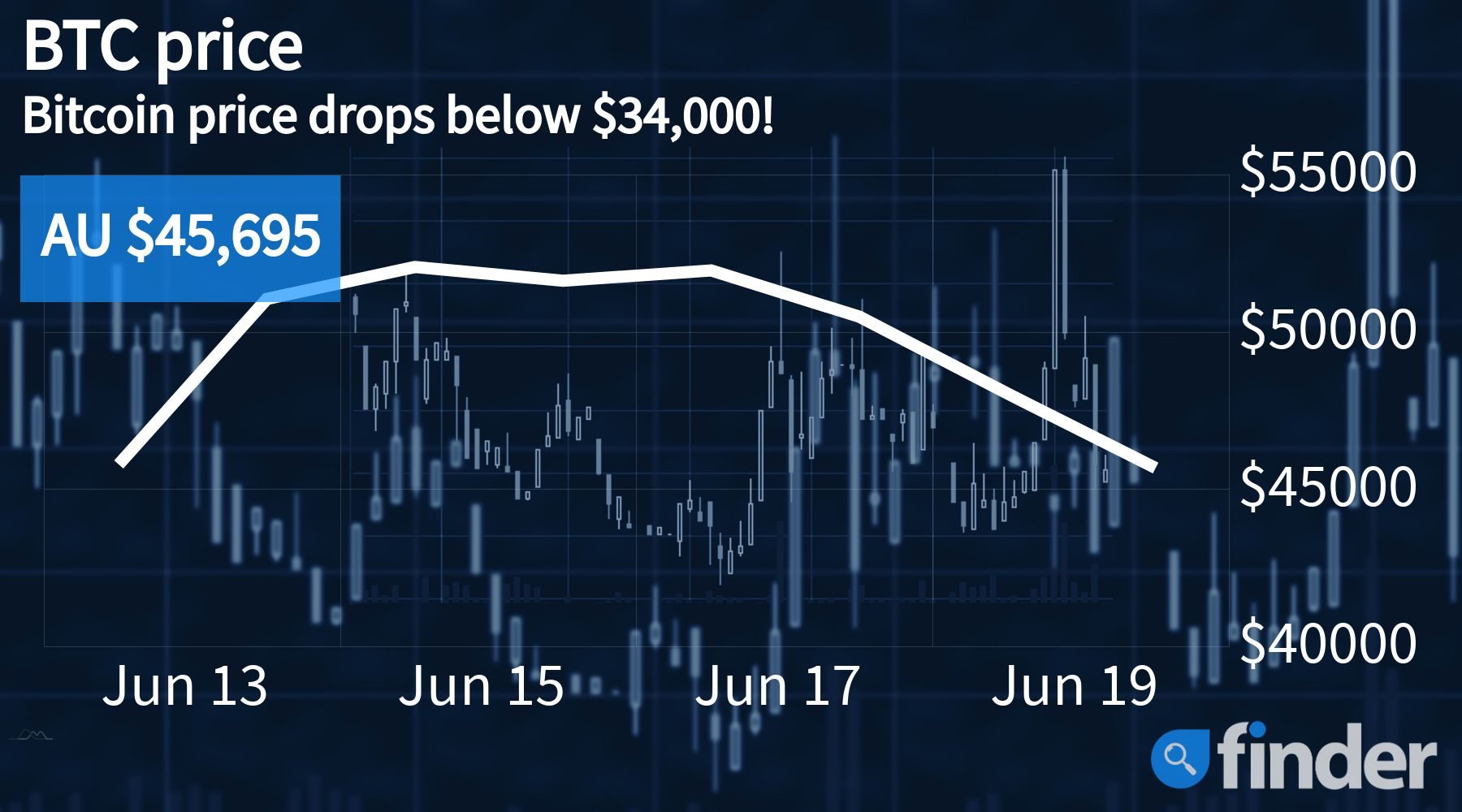 Over the last week, BTC's value has slid by more than 12%

Bitcoin, the world's largest cryptocurrency by total market capitalisation, dropped to a relative low of $33,750 over the last 24 hours, thus proving the fears of many analysts who believed the asset was flirting with "weak support levels" to be true. At press time, the premier crypto coin is trading for $34,200.

After having scaled up beyond the AUD$54,000 zone recently, it appeared as though BTC was once again on a path of upward ascent; however, with a fresh new wave of volatility hitting the market as a whole recently, Finder reached out to Kadan Stadelmann, CTO of Komodo, a blockchain solutions provider, to make sense of the ongoing confusion. He pointed out:

"I think that BTC isn't breaking out of the bearish trend quite yet. If we look at the price range over the past couple of weeks, it really has stayed between $33k and $41k. A lot of people are saying that $42k is the magic number for a trend reversal, and that appears to be holding up as the psychological barrier."

In this regard, a development that may potentially be telling of BTCs near-to-mid future is that of the impending "unlocking" phase at institutional investment firm Grayscale. This is because, over the course of the next few weeks, a large chunk of investor funds that have been held by the firm will be released after a 6-month lock-up period. Therefore, it stands to reason that as accredited investors seek to mitigate their losses, the price of the flagship crypto could sink even further.

Lastly, it bears mentioning that Bitcoin's core network fundamentals have also been slipping over the last 7 days or so, with the asset's native hash rate currently in flux – dropping from its ATH of 168 EH/s to a little under 100 EH/s – as a result of all the shifts in miner distribution taking place globally.

Is Bitcoin not future-ready?

In a recent conversation, IOHK CEO and Ethereum co-founder, Charles Hoskinson, told podcast host, MIT researcher and jujitsu black belt, Lex Fridman, that Bitcoin suffers from a number of disadvantages – primarily related to its low network speed and transaction throughput capacity – as a result of which it stands to be completely overshadowed by proof-of-stake (PoS) networks in the mid-to-long term, adding:

"The problem with Bitcoin is that it is so slow – it's like the mainframe programming of the past. The only reason it's still around is because there is so much invested in keeping it around."

In his view, the only thing that can keep BTC competitive in relation to its competitors (such as ETH) is if an entire network "overhaul" is performed, with the currency having to undergo a consensus upgrade. "It has the brand name, it has the regulatory approval. But, there's no way to change the system, even correcting obvious downsides in that system," he opined.