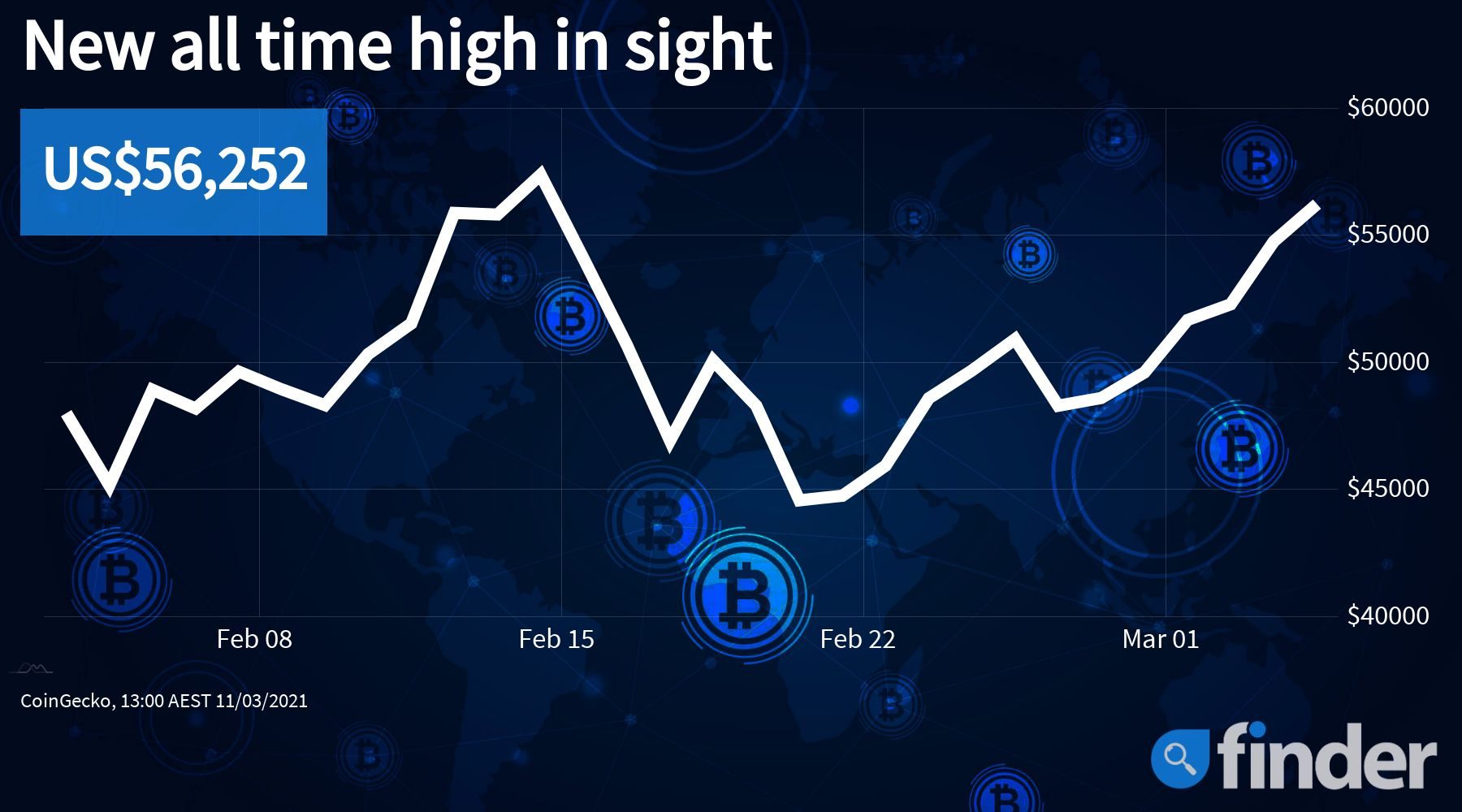 Bitcoin surges towards AUD$75,000 with the digital asset’s volatility showing a sharp increase of consecutive days.

Bitcoin is trading at AUD$73,272 at the time of writing, which is a 2.4% increase in the last 24 hours according to data released by CoinGecko. The spot price of Bitcoin experienced a consecutive day of heavy volatility over the last 24 hours.

The daily low reached AUD$70,327 about 20 hours ago before paring losses to a daily high recorded only moments ago at AUD$74,591. That’s an increase of over 6% which stands out as the second day of extreme volatility.

The advancing price of Bitcoin has led a mixed market for altcoins again for a second day among the top 10 altcoins. Binance Coin buoyed by the of popularity of Binance Smart Chain has been the strongest performer with a 2.8% gain on the day. Ethereum is up 0.9% over the last 24 hours.

Mixed results in the market for alts

Among the losers are Ripple’s XRP and Polkadot having lost 2.6% and 2.8% respectively. Cardano has lost 3.6% and Dogecoin, which is now 16th on the list of largest cryptocurrencies by market capitalisation, has lost 1.2% today though it remains 10.1% up on the week.

Bitcoin’s market capitalisation has waned over recent months despite the uninterrupted price gains since September of 2020. Moving from a high of 71.9% on 4 January 2021, Bitcoin’s market cap has shrunk to today’s 59%. This comes as Bitcoin recently moved over a US$1 trillion market cap.

Opposite to that, the market cap of all other cryptocurrencies has increased from 11.95% on 4 January to a tick over 26% today. That 14% increase has mostly come at the expense of Bitcoin which has lost over 13% in market cap as markets have inflated the price of altcoins over the last couple of months.

Peter Schiff, the CEO of Europac, well known as a gold bug and an uncompromising Bitcoin detractor, has made headlines again. As was reported by Finder, Peter Schiff is an outspoken critic of Bitcoin saying that Bitcoin doesn’t “fit the definition of money” and that Bitcoin could go to zero. 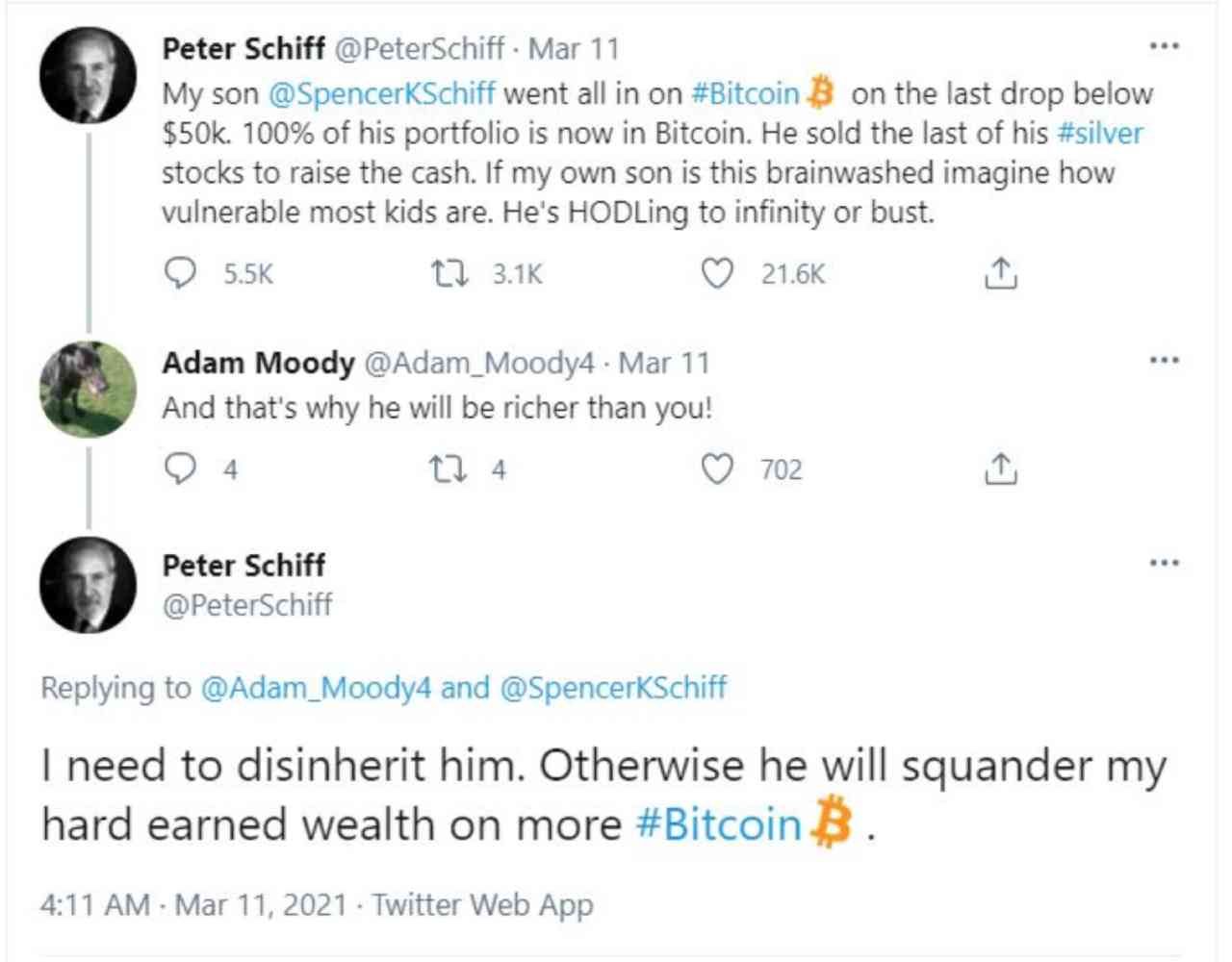 This week Schiff is contemplating “disinheriting” his son. The comments come as Schiff announced on Twitter that Schiff’s son, Spencer, had bought the most recent dip in the price of Bitcoin. According to Schiff senior, the “brainwashed” Spencer moved 100% of his portfolio into Bitcoin.

The statement seems serious with Schiff senior posing the question that if even his own son would “HODL to infinity or bust” how “vulnerable most kids” might be. Schiff, who appears to be swimming against the current, is backed up by Charlie Munger, long time Warren Buffet lieutenant and Berkshire-Hathaway partner.

Munger recently said that Bitcoin might be “too volatile” to become a reliable store of wealth. Other concerns have been raised by the likes of Ray Dalio, founder and managing director of the world’s largest private wealth fund.

Dalio’s concerns centre around the regulatory uncertainty of Bitcoin. Dalio said that while he views Bitcoin and its “analagous competitors” as gold-like assets, the regulatory environment is uncertain. Dalio suggested that monetary regulators could place barriers preventing mass adoption of digital assets in payments harming Bitcoin’s overall value.

However, there appear to be few among the millennial generation that caution against the rise of Bitcoin. And that generational gap is evident as Schiff junior has reportedly gone all in on digital assets despite the warnings of Schiff senior.