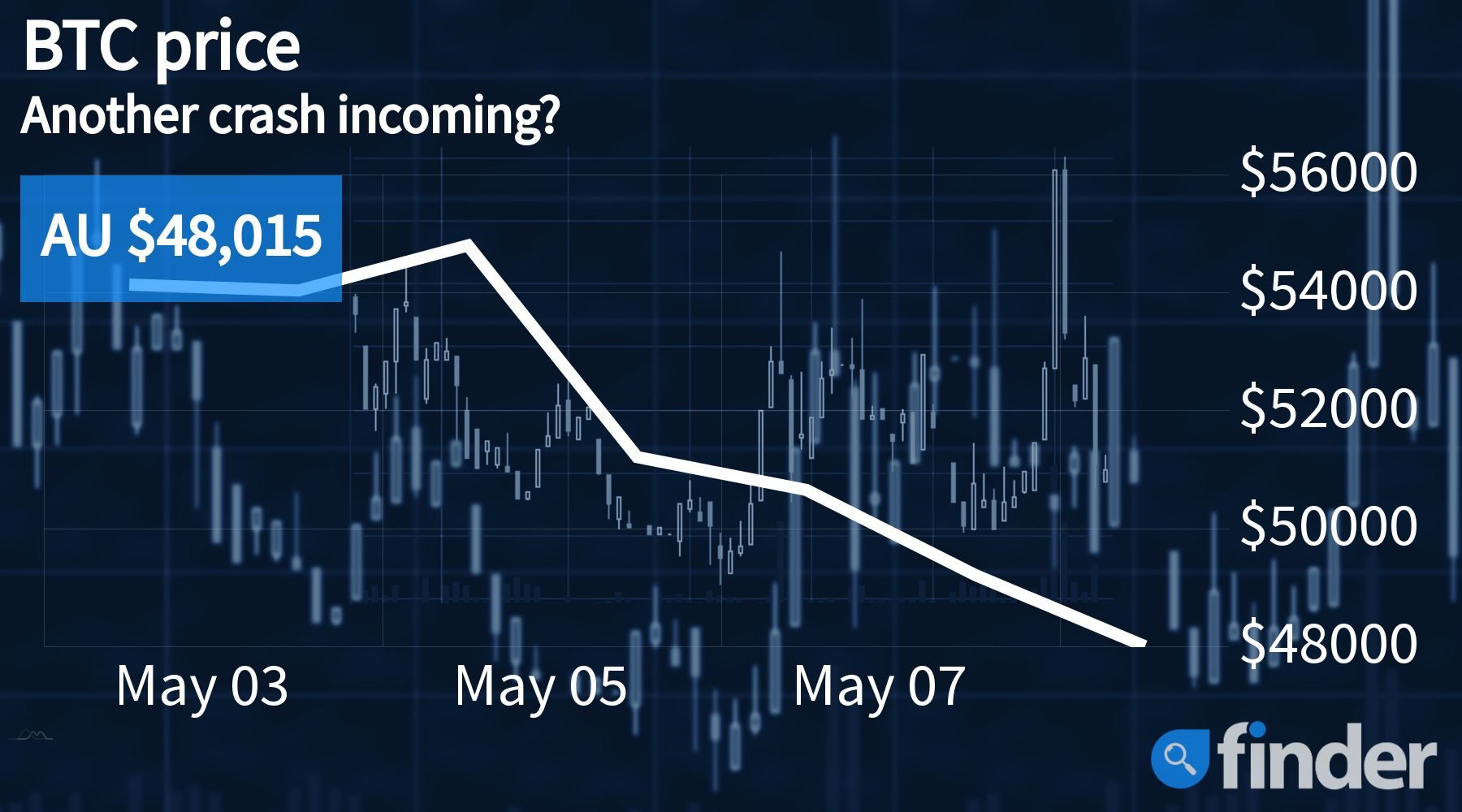 Between 6 and 8 May, Bitcoin's value dipped by a staggering 17%.

Bitcoin, the world's largest cryptocurrency by total market capitalisation, continues to be ravaged by bearish pressure, evident by the fact that over the last 72 hours the premier digital currency has seen its value dip from approximately AUD$56,000 to as low as AUD$48,500. That said, Bitcoin has since made a minor comeback, currently trading at AUD$48,700.

Even though Bitcoin seemed to find some respite from the ongoing volatility around the AUD$51,000 range late yesterday afternoon, the stability was short lived because the cryptocurrency soon faced a series of liquidations. To this point, on-chain data suggests that since 8 May, around $80 million worth of Bitcoin and Ethereum has been liquidated by investors across the globe.

In terms of where the market may be headed in the near term, analysts believe that more dips may be incoming, with Bitcoin potentially nosediving as low as AUD$41,000 (US$29,000) before forging any sort of trend reversal.

Is Terra's stablecoin to blame for all the carnage?

An interesting aspect of Bitcoin's current downturn is that it coincides with news of blockchain protocol Terra's stablecoin offering TerraUSD (UST) (which, as the name suggests, has its value pegged to the US Dollar in a ratio of 1:1) witnessing a wipeout of almost US$300 million, and that from a single wallet address.

Over the past month or so, Terra has had the global Bitcoin community on the edge of its seat, especially since co-founder Do Kwon announced that his project will be acquiring US$10 billion worth of Bitcoin over the coming months. To this point, the Luna Foundation Guard, Terra's non profit arm, has already accrued 80,394 BTC (worth approximately US$3.5 billion) to date.

Lastly, as a result of the above stated liquidation, UST saw its dollar peg sway by a factor of 0.8%, with many experts suggesting that the dump was an attempt to malign the project's growing popularity. On the subject, Brazilian financier Caetano Manfrini was quoted as saying:

"Today's attack on Terra-Luna-UST was deliberate and coordinated. Massive 285m UST dump on Curve and Binance by a single player followed by massive shorts on Luna and hundreds of twitter posts. Pure staging. The project is bothering someone. On the right path!"

The future looks bleak for Bitcoin

From a macro perspective, Bitcoin has been forming a red candle pattern for over 6 weeks running, something that has not happened since 2014, implying that the asset's fundamentals are currently weak. As a quick refresher, a "red candlestick chart" indicates that the closing price of an asset is below both the price at which it opened and previously closed in relation to a predefined time window.

To really put into perspective how bad things are currently, Bitcoin's performance at the moment is even worse than what happened during March 2020, a time when the market at large witnessed a major drawdown, with the value of Bitcoin dipping from US$8,000 to $4,000 within a 48-hour stretch.