Now's a good time to look at the performance of Bitcoin compared to the rest of the cryptocurrency markets.

Bitcoin has maintained its hold above the US$5,000 range, much to the relief of any market watchers worried about an impending drop. In fact, over the last day there's been a pronounced drop in the altcoin (any cryptocurrency except Bitcoin) markets, while BTC is showing a lot more resilience.

As such, it's probably worth taking a closer look at the interplay between Bitcoin and the wider cryptocurrency markets in recent weeks. 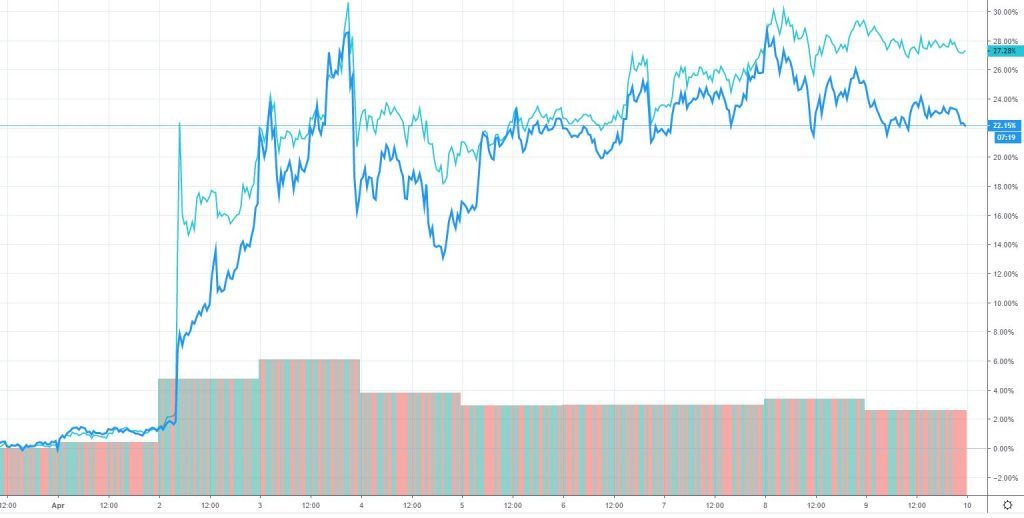 What to look at

The first point on show here is that the massive spike on 2 April was extremely Bitcoin-centric, and that it led the rest of the markets onwards. Whatever happened there happened to Bitcoin specifically. So there probably wasn't any kind of broad industry news underpinning it. It lends further support to the theory of that big spike being a short squeeze on the Bitcoin futures market.

The second point is that Bitcoin prices have been much more robust than the rest of the markets since the big rise, and the difference seems to have grown. The comparatively fragile altcoin markets settled unusually low compared to Bitcoin for a roughly 24 hour period from 4-5 April, but now they've settled into a more extended period of difference from 8-10 April.

What does it mean?

But if it does mean anything, some of the things it could mean are that:

It's also notable because the big market news of the day is that China is pondering a ban on Bitcoin mining. The move is still up for debate, but it was a very deliberate step from the National Development and Reform Commission (NDRC), which specifically included Bitcoin mining in its list of industries it proposes should be eliminated.

So while it's not a done deal yet, there's still a very real chance of this happening in the near future.

This kind of news is broadly expected to send an unpleasant shockwave rippling through the Bitcoin market, mostly because it just feels like the kind of thing that should be bad for Bitcoin. But for practical purposes there's no real reason why this should have much of an impact.

China has previously cracked down on cryptocurrency mining in various ways. Around the start of 2018 it "cracked down" by removing electricity subsidies that miners shouldn't have had anyway, and by encouraging an "orderly exit" from the industry. The order was never followed through with, but a lot of miners heeded it anyway and orderly exited to a more geographically diverse set of locations.

In this way, the downsides of a potential cryptocurrency mining ban from China were already "spent" in early 2018. It was then refreshed later that year by the plunging markets, which saw most outfits in China fall below the profitability threshold, and a new miner exodus.

Even if the ban goes through, there are no reasons to expect it to have any impact on Bitcoin prices beyond the sentimental. It might make mining a bit more expensive, but that's about it.

Of course, Bitcoin mining as a whole is still grossly inefficient and the rising prices risk bringing further wastage as more people invest more heavily in the Bitcoin mining industry. A hard crackdown on Bitcoin mining, mining gear manufacturing and everything to do with it isn't entirely unreasonable. The indefensibility of Bitcoin mining on sensible grounds also suggests that the ban will be likely to go through.

But on the whole, it looks like Bitcoin bulls have good reason to be bullish right about now.