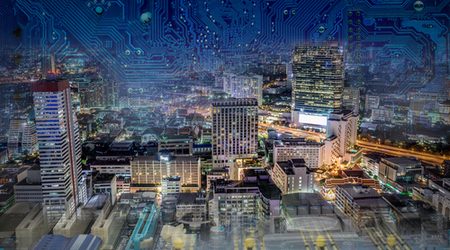 It's not possible to seriously consider any models of Bitcoin's value, or price action, without considering manipulation.

Here's a smoothed-out version of what hashrate (solid line) looks like next to prices (dashed line).

At the end of the day, hashrate is a physical product, with its own supply chains and raw materials, and its own manufacturing and delivery times. The time it takes to manufacture, deliver and set-up the machines means you'll often see hashrate increases following price rises as buoyant miners place orders with the goal of cashing in on the next Bitcoin bull run.

At the same time, there are all kinds of different machines of varying efficiency and operating costs around the world, and people will typically switch off machines if it's not profitable to mine at a given time. This means you'll often see surges of hashrate coinciding with price rises as dormant machines spin back into action.

Sentiment also plays a part in the interplay between hashrates and prices. It can help buoy hashrates in the face of low prices because miners are more likely to accept operating at a loss, if they can, if they think it will pay off when Bitcoin prices rise in the future.

And on paper, it can also indirectly help bolster prices. Zooming out, we can see that Bitcoin's prices and hashrates simultaneously ran up from April onwards. Then Bitcoin prices started exploding in May, and hashrates explosively followed.

What happened in April?

Price-wise, Bitcoin leapt into $5,000 and stayed there, seemingly putting the doldrums of $3,000 to $4,000 behind it. Hashrate-wise, one of the world's largest crypto mining manufacturers, Bitmain, released the Antminer 17 series, which represents a considerable step up from the previous generation.

At the same time, the winter melt hit Sichuan in China's southwest. This change in weather is a big statistical deal because by some estimates that region accounts for a monumental 50% of global crypto mining activity on account of its abundant hydroelectric power. When water levels are high, from about April to October, electricity prices in Sichuan can drop as low as 0.1 yuan per kilowatt hour. It stands in stark contrast to the more normal 0.25 CNY/kWh to 0.4 CNY/kWh.

Essentially, regardless of what Bitcoin prices did in April, there would have been a massive increase of hashing power. And the reason this can drive price rises is because it means it's suddenly a lot cheaper for miners to produce the same amount of Bitcoin.

A new Bitcoin block is produced every 10 minutes on average, and each block comes with a 12.5 BTC reward. One equation leads to another, and you currently have an average of 1,800 new Bitcoin being created each day, valued at more than US$20 million all up.

All of this inflation goes directly to the miners, and it's a considerable chunk of change.

To very roughly put this inflation rate into perspective, the current 24-hour global Bitcoin trading volume is (perhaps) somewhere between $1 and $2 billion, based on the "95% of volume is fake" and the "Messari Real 10" volume models. If you split the difference at $1.5 billion, the daily inflation rate is some 1.3% of that. It's a sizable amount.

It's also best taken with a grain of salt. The exchange volume guesstimates are vague, and most of it is back-and-forth trading rather than outright buying or selling anyway. Plus, miners dispose of their Bitcoin OTC, which keeps it off exchanges.

Anyway, as this deeply flawed theory goes, if all the miners are constantly selling, you have considerable and ongoing downwards price pressure. If all the miners are hanging onto their coins instead, that pressure lifts and Bitcoin prices have more room to rise.

The main reasons miners wouldn't sell is simply because they don't have to. The mining efficiency boom that arrived in April helped see to this by drastically reducing the cost of mining – at least until hashrate and difficulty increases drive it back up.

Another reason miner-selling pressure may have eased is because the vibe right now, especially in China, is that it's a great day to be holding Bitcoin. If you have an optimistic outlook on future Bitcoin prices, you're not selling any more than you absolutely need to.

Tom Maxon, CoolBitX head of US operations (and former teacher of courses on alternative economic models of East Asia at UC Berkeley) suggests that the recent US-China tariff kerfuffle is painting Bitcoin as the mood of the day.

"While markets are in turmoil around the globe, the recent bitcoin surge above $11,000 has a lot more to do with the 10 percent tariffs on $300 billion worth of Chinese goods announced by President Trump," he said. "This economic uncertainty has sent the yuan into a tailspin, and China has responded with another escalation of the trade war. The yuan has since rebounded to the key 7 per dollar level, but uncertainty is still high. For a lot of currency holders, bitcoin is seen as a safe haven."

But it's still not possible to separate any Bitcoin price movements from manipulation, he says. The neat match between Bitcoin's price, its "alternative store of value" narrative and current affairs, could simply be opportunistic manipulation.

"Billions of dollars in daily volume are handled by whales and managed portfolios through over-the-counter (OTC) desks, and actually relatively smaller volume is held in exchanges that are accessible by retail investors," he points out. "OTC desks are largely unregulated and therefore, it is impossible to know exactly where the inflows and outflows are coming from. These whales and shrewd, large-volume traders (including exchanges themselves) will most likely leverage bitcoin’s current upward momentum toward a new high from its previous peak in order to short it to the detriment of less powerful retail traders."

The same thin markets that could theoretically let the disposal of the daily block rewards influence prices also make it ripe for outright manipulation. Similarly, the block rewards may also be landing directly or indirectly in the hands of the whales and fuelling subsequent rises and falls.