Despite strong technical indicators, bitcoin may slump back to about $10,000 in the short run.

Bitcoin crossed its 50 day moving average on 6 March, Bloomberg reports. Prices were buoyed with recent jumps, including gains of about 5% on Monday.

"Crossing the key level may raise spirits of investors as they look for anything to spark a renewed rally," Bloomberg said. But a bearish market the day after saw bitcoin trading below $11,000 again, with analysts expecting further drops. 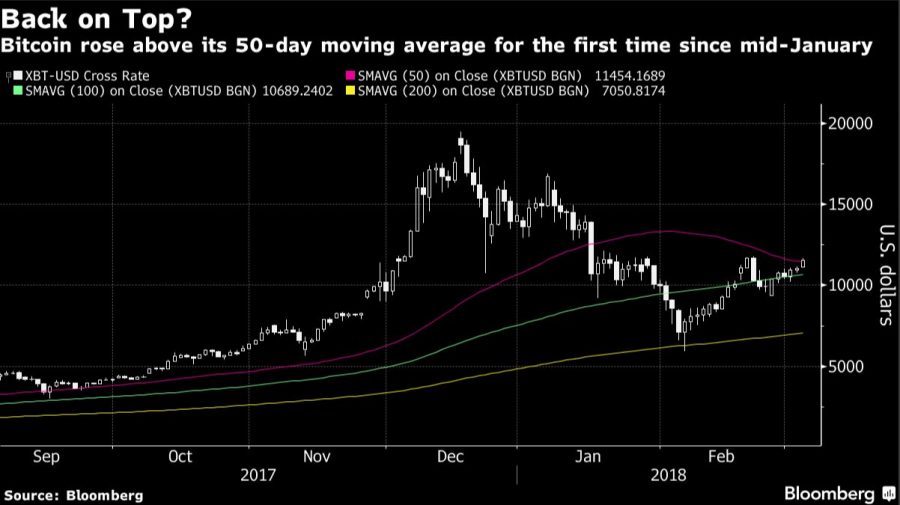 "While a move above the 50 day would normally be a bullish signal, the fact that the recent price rally stalled at the key $12,000 level is a worrying sign for the bulls," said Investing.com senior analyst Jesse Cohen.

Right now the 50DMA (the pink line above) might be a bit anomalous, with the December price peaks having recently slipped outside it, but with the depths of the February crash still being part of the measurement, so it might not be as strong an indicator as bulls would hope.

100 or 200 day MA (the green and yellow lines respectively) might be a more relevant indicator, but the rapid growth of bitcoin prices in the second half of 2017 have habitually seen bitcoin prices riding above it in recent months.

"Prices would need to cross above their 100DMA at around $12,320 to reach further highs," said Cohen.

For someone hoping to cash in on a bull run, this might be the technical sign to look for.

Bitcoin has seen a resurgence of its market dominance in recent weeks, rising from a low of about 30% to over 40% cryptocurrency market share since around the start of February, which might also indicate a stronger future for the original coin.

Plenty of exchanges are also banking on further grow in 2018, and the usual bitcoin ups and downs, even an anticipated potential drop back to $10,000 in the near future, probably won't deter anyone for long.