Not everyone has the stomach for real immutability, and that's alright.

Bitcoin Cash has been struck with a 51% attack, according to an assembling of loose details.

Its two largest mining pools, BTC.com and BTC.top, are believed to have colluded to re-organise the blockchain so they could seize and redistribute coins that had been lost to SegWit-related incompatible address complications over time.

To set the scene for this incident:

So as the 15 May update rolled around, one mining entity jumped right on it and started hoovering up those previously-unspendable transacations, aided in part by a nuisance-type attack which was hitting the network and keeping other miners busy at the same time.

This didn't go down well with the BTC.com and BTC.top mining pools, who were themselves preparing to recover the previously unspendable funds.

And so they used their enormous hashing power, which combined to more than 51% of the network, to block that other miner's transactions and prevent them or anyone else from grabbing the coins before they could.

Here we see two mining pools colluding through their own private back-channels to wrest control of the blockchain and decide which transactions can and cannot go through. This is an excellent example of a 51% attack.

But here's where it gets complicated...

Opinion: Watershed moments and the myth of decentralisation

Rumour has it that BTC.com and BTC.top were planning on grabbing the coins in order to return as many as possible to the original owners, and presumably pocket any others as a generosity fee.

But it's safe to say the miner who got stomped on had no intention of being so altruistic. Indeed, some people are rejoicing at BTC.com and BTC.top's successful 51% attack as a victory over an evil-doer.

This kind of situation has been a watershed moment for various communities. The best-known example is probably when Ethereum decided to 51% attack itself in order to recover the funds lost in the DAO hack. The general consensus among Ethereum developers is that in hindsight, it was a mistake.

The simple fact is that decentralisation and immutability are not cheap, easy or friendly.

Building an actual immutable network is a gradual process that involves sitting on your hands while thieves rob people, even though you could stop them. It means watching hundreds of millions of dollars being lost forever to small mistakes, and then ignoring the pleas of the victims. It means deliberately making things difficult, designing systems to be more expensive and less user friendly, and aggressively working towards a state of complete helplessness.

Not everyone has the stomach for it. Clearly the majority of Bitcoin Cash's hashrate doesn't. And that's alright, because decentralisation and immutability isn't for everyone and won't always be the best tool for the job.

Bitcoin Cash might have a duopolistic governance structure, with BTC.com and BTC.top ruling as benevolent twin kings, and that sounds pretty cool. A benevolent monarchy could be an alright place to live, and if the kings keep putting their money where their mouth is, the currency of the kingdom might retain its value.

It's a little disingenuous that the Bitcoin Cash kingdom keeps trotting out the "decentralised, censorship-resistant payment network" slogan in an effort to appeal to tourists, but that's crypto for you. Decentralisation and immutability are undoubtedly among the biggest and most-repeated myths in the space.

But as the space evolves, the time is coming for people to take a good, hard look at the myth of decentralisation.

Regulatory winter is coming, and we'll soon find out how immutable and censorship-resistant your coin really is. If a higher authority than the kings of Bitcoin Cash (like, a real government or something) demand that they start blocking certain transactions, it's safe to say that's what's going to happen.

Who has the stomach for immutability?

As the mutability of different coins and their susceptibility to censorship is revealed, their value propositions will change and governance structures will play an increasingly important role in defining the actual use and value of different coins.

The most obvious division will be between the mutable and the immutable.

Most coins will end up on the mutable side of the fence, especially if they use conventional proof of work. If they do, their governance structures are neatly packaged into a small set of easily-identifiable mining pools to be subjugated as needed.

BTC may or may not be an exception. Rather than BCH's benevolent rulers who are willing to modify the blockchain in service of their community, BTC's governance culture is more like an order of knights (or cultists, if you want to be less flattering) who have taken solemn vows to uphold the ideals of immutability and decentralisation.

Despite occasional temptations, their vows haven't been broken yet. But with sufficient leverage you could certainly get a few of them to break their vows.

It's funny how despite all the perceptions of blockchain as an advanced technology, at the end of the day some of its key value propositions simply come back to timeless concepts like culture, tradition and good old fashioned human-to-human trust.

The chart below shows BTC's current knights of the round table, and how much of the table each is 'round. 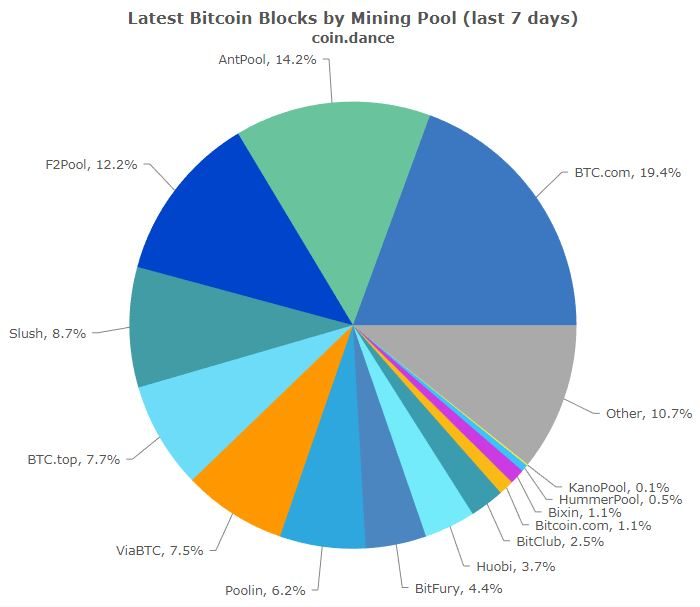 Proof of work will always boil down to this kind of "knights of the round table" governance system, and will only ever be as censorship-resistant and immutable as those knights' vows.

But that's not to say this is a bad thing, or renders any of this pointless. Blockchain is a trust machine, but trust is a complex spectrum and you'll find different valuable applications in different parts of that spectrum. People just don't trust banks, but will still entrust them with money. So people don't trust banks in general, but due to various regulatory safeguards and cultural expectations will still trust banks to perform certain functions.

By cultivating different cultures, expectations, communities, governance mechanisms and consensus protocols, blockchains can offer countless different types and flavours of trust. This is arguably much more useful than just stoically presenting nothing but 100% unadulterated vanilla-flavoured immutability.

At the same time, it's worth looking for the blockchains which are able to create the real deal. Flavour is nice, but some applications require the genuine, 100% unadulterated lab-grade trust that only immutability can offer.

No blockchain has it yet, but someday they'll get there.