Bitcoin bears and altcoin bulls took a thrashing this week 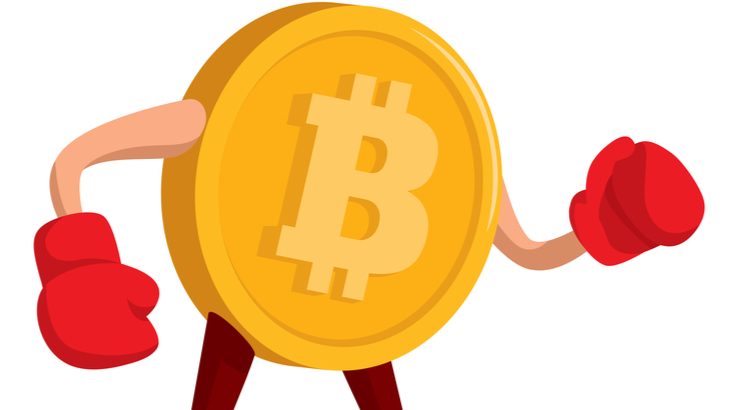 Everyone knows digital cash is valuable. But who could have guessed digital gold could be too?

Bitcoin ushered in 2018 by morosely sinking to its all-time market dominance low of less than 33%. It took about half a year for it to rise back up to more than 50%, and since then it's consistently hung around in the 50-55% range. 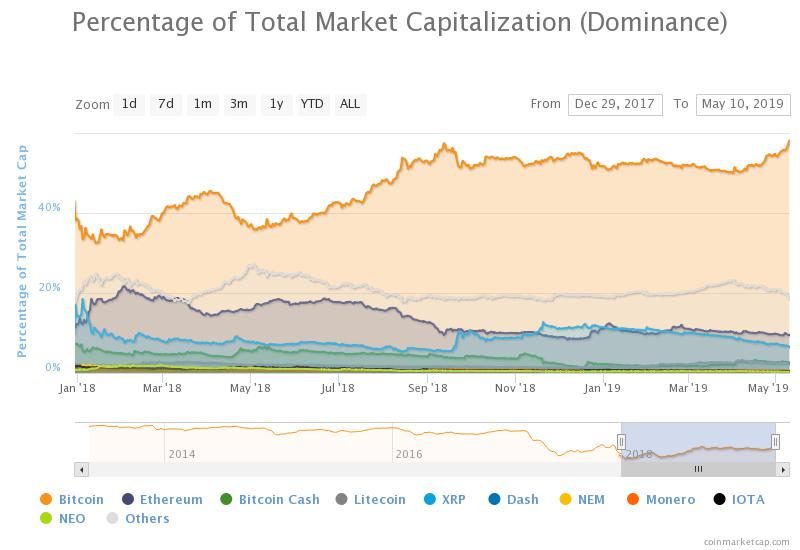 According to LiveCoinWatch, Bitcoin is up around 20% against fiat in the last 30 days, while ETH is down 4.5% in the same period. Things are even glummer for the other top 20 contestants. To look at a semi-random smattering of them, XRP is showing a 15% loss, IOTA a 17% loss, newish entrant ATOM a 22% fall and Stellar a truly outstanding 28% loss.

Binance Coin is a fun exception, because even after a seven-day loss of 21% following the Binance hack, it's still up almost 5% over the last 30 days.

Among the pure currency-style coins, Bitcoin Cash is putting on a brave face with about a 5% loss over the last 30 days. On the other hand, DASH is feeling a 13% drop, Litecoin is aching at a 16% fall and BSV is close to losing 30% of its value in as many days.

Note that this will likely change by the time you have read this.

So what does it all mean, if you insist on it meaning anything?

Opinion: The value of a Bitcoin

What's clearly happening here is people shifting away from altcoins to chase the Bitcoin rise, engineering a self-fulfilling prophecy as they do. This is interesting, because Bitcoin's actual value proposition is under heavier attack now than it has been in a long time.

Following the Binance hack, there were some quickly-quashed discussions of a blockchain reorganisation to recover the funds. The community, for the most part, didn't take to it well, and Bitcoin actually had to contend with the spectre of its own mutability for the first time in quite a while.

Basically, Bitcoin has two core value propositions – two reasons why it's valuable. One is that it's immutable, and the other is that it's scarce and contains value simply because it's valued.

But the fact that Bitcoin isn't technically immutable has been an open secret for years. The pool of Bitcoin miners is small and they all know each other. If the mood collectively took them, engineering a blockchain reorg would be extremely easy.

"So what?" some people argue. The miners are dedicated to Bitcoin's immutability, and in most cases are genuinely committed to making sure no one can tamper with the chain. They are both ideologically and financially motivated to protect the blockchain, so there's nothing to worry about. And this is undeniably true. Only the most extenuating circumstances could make the miners agree to reorganise the blockchain. For all intents and purposes, even a crypto behemoth like Binance couldn't single-handedly engineer a reorg just because it wanted to.

But others argue that this still puts Bitcoin back to square one, relying on social norms and blind trust to secure the blockchain, and that to pretend otherwise is willful ignorance. Even if miners won't reorg, the fact that they can is still problematic.

But the markets clearly aren't fussed. So if cryptocurrency prices are based on the inherent value of the products being traded (they aren't, but let's just stick with one inconvenient truth at a time), it clearly means Bitcoin's value is not dependent on it being genuinely immutable.

Rather, the price tag must be attached to some other element. It may reflect trust in the motivations of the miners that secure Bitcoin, or belief in its functionality.

Let's circle back to the other cash-style cryptocurrencies that are falling even as Bitcoin is rising.

For the most part, their innate value propositions are very similar to Bitcoin's in that they offer a dubious degree of blockchain immutability and contain value simply because they are valued. But they also aim to offer a degree of utility that Bitcoin doesn't, in the form of faster and cheaper transactions.

Functionally they are faster and cheaper than Bitcoin, while otherwise having identical value propositions. And yet, they're obviously lacking that special something which makes Bitcoin as valuable as it is.

That special something has been described by a lot of people as "meme value".

As Ethereum developer Danny Ryan once observed, "The meme value of Bitcoin is very high. People definitely bought into the meme... the store-of-value meme, the king-of-crypto meme, the first-and-thus-better meme... the gold thing."

It might not sound flattering, but for the sake of perspective, it's worth noting that this isn't unique to Bitcoin.

Rhino horns are not an aphrodisiac, but they're still incredibly expensive. Gold has been in a bubble for thousands of years, natural diamonds are functionally inferior but monetarily superior to artificial diamonds, the world's most expensive food is flavour-neutral bird phlegm, alternative medicines with no proven use are growing in popularity and far too many luxury goods are just plain ugly.

A bet on Bitcoin is a bet on the irrational value attached to collectibility and brand recognition. Historically, that's always been an incredibly safe bet.

It's nice that Bitcoin (BTC) audaciously took the digital gold rather than the digital cash route, because it's really hammered home the point of how irrational the concepts of value can be. Everyone knows digital cash is valuable, but far fewer people would have guessed that digital gold could be too.