Emerging economies and advanced economies have very different takes on digital currencies of all kinds.

The Bank of International Settlements (BIS) recently published its second survey on central bank digital currency. The overall sentiment of each survey is well summarised by their titles. The 2018 survey, published at the start of 2019, is titled Proceeding With Caution. The newly-published 2019 survey is titled Impending Arrival.

One of the major developments between the publication of each survey was the announcement of Facebook's Libra stablecoin. And given the flurry of central bank digital currency (CBDC) activity, which has been directly attributed to Libra, one would expect this to have been a defining difference between the 2018 and 2019 surveys.

And it looks like it was, but maybe not in the way one would expect.

Following Libra's reveal, the G20 leaders released a joint statement saying they would not permit wide-scale stablecoin issuance until a host of potential problems were solved and they feel comfortable with it. At the same time, many nations have drastically accelerated their central bank digital currency plans, to avoid leaving a vacuum in which stablecoins and other cryptocurrencies can grow.

This was reflected in the BIS survey, but not in an especially dramatic way.

In 2017, some 65% of the surveyed central banks were engaged in CBDC work. By 2018, this was up to about 70%. Now that's up to 80%. There was a narrowing of focus though, with more central banks pulling back from exploration of both wholesale and general purpose CBDC, and deciding to focus on one or the other.

All central banks that said their CBDC had progressed to development or a pilot project is an EME institution.

The two ends of the CBDC spectrum are wholesale and general purpose.

The wholesale side of the scale is less risky and less complicated, but also carries fewer potential benefits. Financial institutions can already settle electronically and quite efficiently in most developed economies.

The general purpose side of the scale is riskier and more complicated, but also potentially much more impactful.

"Motivations for researching wholesale CBDCs are generally weaker than those for general purpose CBDCs," the BIS notes.

Additionally, emerging market economies (EMEs) overall have much stronger motivations across the board to develop both wholesale and general purpose CBDCs than developed economies do.

The findings from the 2019 survey are consolidated below, based on the average central bank responses to the question of how important each factor (financial stability, etc) was in motivating their CBDC development. Low numbers are less important, large numbers are more important. The blue lines are emerging economies, the red lines are advanced economies. The pale colours are wholesale CBDC, the heavy colours are general purpose CBDC. 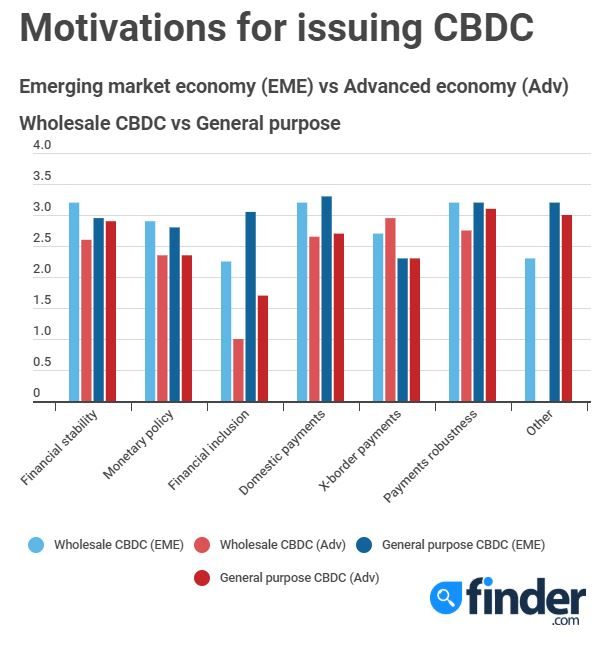 Overall, emerging market economies are more strongly motivated to develop both kinds of CBDCs. Facilitating financial inclusion, better enacting monetary policy and "other" were all much stronger motivators for EMEs than advanced economies. The one exception is wholesale CBDC for cross-border payments in advanced economies.

Per the results, no advanced economies are motivated towards wholesale CBDC for any reason other than those specified, hence the zero in the "other" column there. Looking at the same column, it also seems central banks have a wider range of motivations for developing general purpose CBDC than wholesale CBDC.

One of the biggest differences from 2018 to 2019 was central bank attitudes towards privately issued digital tokens for use in payment, such as stablecoins. In 2018, only 10% of respondents said they anticipated increased use of cryptocurrencies for cross-border payments, and 8% said they anticipated it for domestic payments.

In retrospect, it's clear how Libra and other stablecoins utterly blindsided most of the world's central banks.

When asked "Are banks or non-banks experimenting with or issuing private digital tokens as part of their payment service?" 66% of central bank respondents said no, while a further 10% said they didn't know. Less than a quarter answered yes.

CBDC developments crystallised slightly from 2018 to 2019, but central bank attitudes towards stablecoins and other privately issued tokens went through a radical change.

2018: "Are banks or non-banks experimenting with or issuing private digital tokens as part of their payment service?" 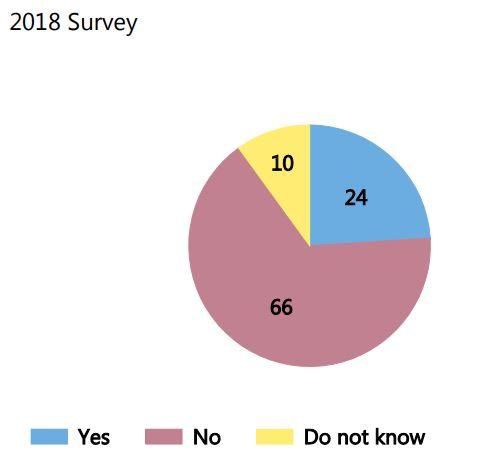 2019: "Are you analysing the potential impact on monetary and financial stability of stablecoins?"

It's quite telling to see that uncertainty dropped sharply in the intervening year. Where central banks today are not analysing the potential impact of stablecoins, it's because they have consciously decided not to.

Almost all respondents not currently analysing the impact of stablecoins is an EME. These respondents are also significantly less likely than the global average to be working on CBDCs. Yet on the whole, EMEs were much more motivated to develop CBDCs.

This suggests a sizable gulf of EME central banks that want to be developing their own CBDCs but aren't, and hints at how much opportunity there is for stablecoins and other privately-issued currencies in emerging economies.

As many people have previously said, emerging economies are likely to be where stablecoins and other cryptocurrencies first come into their own.