How Foxtel's Binge app will take on Netflix, Stan and Disney+

How Foxtel’s Binge app will take on Netflix, Stan and Disney+

While the existence of Foxtel's Project Ares service has been one of the worst kept secrets in the streaming video on demand (SVOD) market, much of what it will offer has remained a mystery. Until now. Foxtel held a press conference on 21 May 2020, providing full details on the service. Starting with its name.

The official name of Project Ares is Binge. And despite a number of rivals already in the market, CEO Julian Orgin believes the consumer base will double in the next three years.

It's an intriguing choice. Not too long ago, the idea of binging on TV carried with it a negative connotation, but Foxtel is looking to embrace this pastime. It heralds the fact the line-up of content on Binge is binge-worthy, share-worthy or award-worthy. All three of which Foxtel declares "unturnoffable".

Binge revels in the idea of escapism, indulgence and me-time. You can discover everything you need to know about Binge TV on our hub page.

Binge will launch in three price tiers, with all the same content available regardless of tier. The main difference between the plans is the available maximum resolution and the number of permitted simultaneous streams.

The price structure appears to mirror that of Netflix and Stan. However, Netflix ($19/month) and Stan ($17/month) both offer 4K and Dolby Atmos on their highest price tiers. Binge does not. It's also significantly higher than both Disney+ ($8.99/month), Apple TV+ ($7.99/month) and Amazon Prime ($6.99/month).

It is much cheaper than accessing all the available content through Foxtel Now ($35/month), however, which is the only other means of accessing many of these shows, in Australia. Making Binge vs Foxtel an interesting battle in itself.

Binge will launch with a 14-day free trial period for new customers.

While Binge will not be restricted to HBO content, the famed production house is undoubtedly the service's shining star. Foxtel recently extended its partnership with WarnerMedia – owner of HBO – and tons of content is included, as Finder's report shows. The key titles confirmed at the press event was every episode of Game of Thrones, True Detective, Band of Brothers, Westworld, Chernobyl, Succession, Big Little Lies and Sex and the City will be on Binge at launch. Run will also join the catalogue from June.

Other highlights earmarked for Binge at launch is every episode of AMC's The Walking Dead, the Mrs. America mini-series by FX and the BBC's Bad Education. In June, FX's Breeders and ITV's White House Farm also join the Binge catalogue.

Beyond that we've been promised over 10,000 hours of content, with new shows added daily. Binge will also launch with over 800 movies! Perhaps most intriguingly, there will be quite a range of documentary, reality TV and lifestyle programming joining the drama, crime and comedy. Kids programming will also be coming at a later date.

Binge, like Foxtel's other spin-off service Kayo Sports, will have channels you can just turn to and watch as well. It's worth noting that channels will be ad-supported. However, if you watch anything on demand, it will be ad-free. 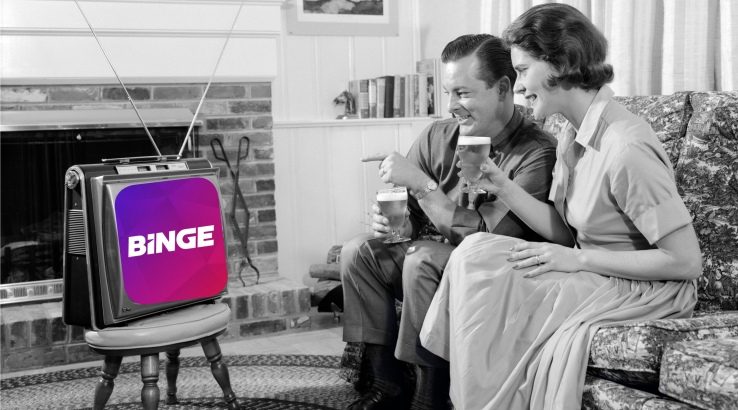 The Kayo Sports app really impressed us with how it innovated on the viewing experience with unique features. Binge is looking to follow suit, even if it takes its lead from the latest UI update seen in iQ4 set-top boxes. Of those announced, the Binge Centres, BingeLists and Surprise Me! concepts are the most interesting.

Binge Centres: These hub locations allow you to dive beyond the actual show, with crew interviews, behind-the-scenes footage, making of documentaries and more.

BingeLists: Effectively a wish list function that allows you to flag something interesting you have discovered that can be watched later.

Surprise Me!: As you might suspect, this uses the service's AI and curated lists (presumably from Binge editors) to help select a show for you to watch. This will only be available at launch on the web and on Telstra TV, with other devices being supported post-launch.

For a lot more detail, head to our Binge overview.