In a chat at the Blockchain 2018 conference in Zug, Vitalik Buterin casually mentioned that he "personally hope[s] centralised exchanges burn in hell as much as possible." The punchy statement was quickly stripped of all context and forcibly inserted into headlines.

"Let's not wish others to 'burn in hell'. Let's have a bigger heart, and appreciate the fact that we are all part of a eco-system, not independent projects," Zhao announced.

"Don't get me wrong, I am all for blockchain/decentralization/freedom. But I would not wish 'burn in hell' on anyone or anything. That's just not a nice thing to say, even if it was said by Vitalik. I didn't bother asking him yet, I assume he just meant he don't like centralization, which is fine."

He also took the opportunity to make some interesting comments on the role played by centralised exchanges in the ecosystem more broadly, positioning it as necessary grunt work for the cryptocurrency ecosystem.

Someone's got to do it

"If it was not for fiat (and centralised) exchanges:

Probably all by more than 10x. Just because someone else is doing the lowly grunt work, doesn't make them dirty."

More broadly, he suggested that it's worth stepping back and looking at decentralisation as just one option among many, to be considered on its own practical merits rather than put on a pedestal.

"Decentralization is a means, not an end" he said. "The goal is to increase freedom, and choice. Let people choose what they want. At the moment, more people seems to choose centralized exchanges over decentralized one, and there are good reasons for it.

"There is no absolute decentralization. Projects with core teams still have centralization. Today, Vitalik probably has more king-like powers than anyone else in the industry, and has used it, by serving as advisers for projects, therefore helped to decide their fate, at least fate of their ICOs to a large extent."

These are all good points, well demonstrated throughout Ethereum's history. The best example, in terms of sheer irony, might be the way Ethereum's core development team is autocratically enforcing decentralisation.

Plus, reputation might be thought of as a centralising force in itself, and there's always a natural tendency for communities to gather around influential figures like Buterin and CZ. 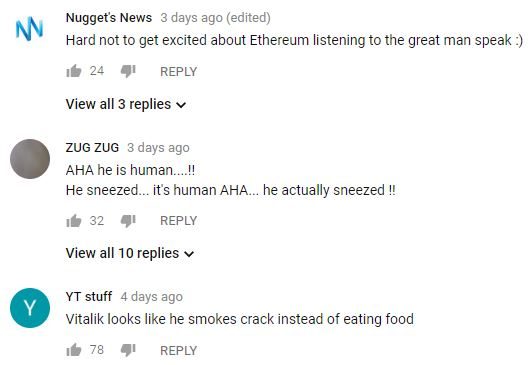