Walmart has patented a blockchain-secured cryptocurrency-based "microbank" scheme. Like Facebook's Libra, it's envisioned as being tied to a fiat currency, in this case the US dollar rather than Libra's basket of currencies.

The issuance mechanism for these Walmart dollars, or "Wallars" if you will, is for straightforward dollar-to-Wallar purchases. The idea is that Walmart holds the dollars and that ownership of the Wallars is tied to specific customers. These Wallar accounts could even earn interest for the customers, Walmart says in the patent. The idea in so many words is to let Walmart operate customer "microbank" accounts.

Judging by the regulatory beating that Libra and Facebook are taking, this "Walbank" scheme would probably need to face similar fires before launching.

Many people undoubtedly find the idea of Walmart (or Facebook) becoming a pseudo-bank chilling. The very idea that these organisations think they can get away with such a flagrant commercial power grab is probably deeply disturbing to many people.

It simultaneously sounds like a return to the bad old days of wildcat banking and company scrip, and a move towards that popular dystopian future where large corporations run the world.

The way it's laid out in the patent, Wallars are practical, beneficial and extremely useful. At the same time, Walmart's customers skew towards the lower end of the income bracket, and its share of the local grocery shopping market broadly correlates with local median income levels, which in turn correlates with availability of financial services.

This is the dichotomy we're looking at here.

On paper, Walmart is the perfect entity to operate as a pseudo-bank in the United States. Off-paper, it raises some dire concerns about monopolisation of the financial system and consolidation of economic power. So, what are we going to do?

If Walmart becomes a pseudo-bank, and its customers have digital currency microbank accounts, they can more easily do the following:

Even setting aside the benefits in aid payments, Wallars could be an extremely effective tool for improving cash flow and reducing costs for low-income households. This is because being poor is expensive. You get gouged by overdraft fees, miss bulk purchase discounts, eat the snowballing cost of short-term loans, emergency loans and credit card debt and get your savings chewed up proportionally faster by flat bank fees – if you have a bank account.

All of these issues are directly, if not decisively, addressed by the benefits of Wallars.

The right place at the right time

Everyone can benefit from saving money, but many of the benefits of Wallars are geared specifically towards low-income households who go to Walmart for groceries. At the same time, Walmart shopper demographics skew towards lower income, and Walmart controls an enormous portion of the USA's grocery market.

It seems like a match made in heaven – as long as you discount all those monopoly and dystopian future concerns.

Here's a Walmart monopoly map, from an Institute for Local Self Reliance study, with an unnecessary but emphatic box around Walmart's densest market share region. 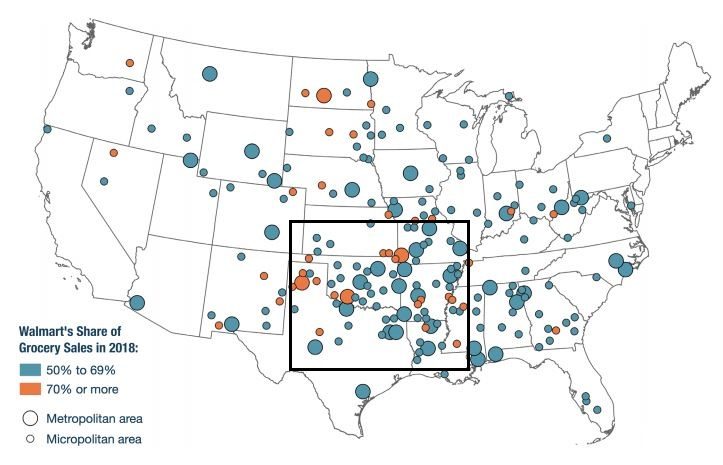 And here's a map of current and potential banking deserts of the USA, with the same square butting in at around the same place, according to the Federal Reserve Bank of St Louis. 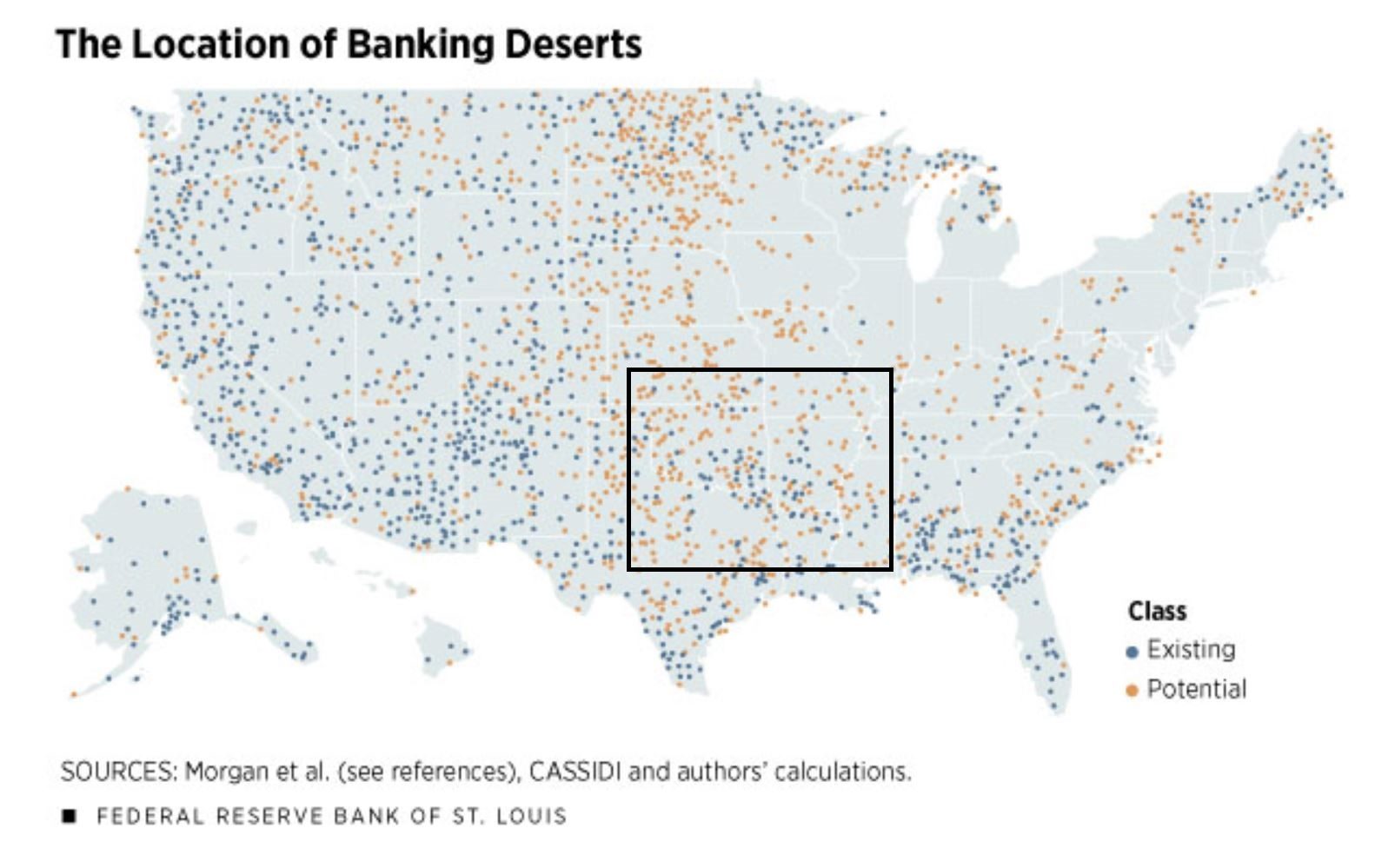 Inside that box and elsewhere in the USA (looking at you, North Dakota), there's a solid correlation between Walmart market share and financial service availability.

Opinion: Should Wallars be allowed?

So, should lawmakers slap this idea out of Walmart lest we accidentally turn the entire state of Oklahoma into the world's largest single Walmart store? Or should we embrace a future of non-bank corporations operating interest-bearing "microbank" accounts for people, complete with interest earned, short-term loans and their very own currency?

There's obviously no definitive answer yet, but on the surface level, there are some factors that say we shouldn't be too quick to dismiss it.

First, Wallars are potentially quite useful, and its overall value proposition is uniquely dependent on being an actual Walmart coin. While some of its functions can be carried out equally well by another digital currency, others hinge on Walmart's retail presence. If lawmakers wanted to address the issue of bank deserts in certain regions, they could do a heck of a lot worse than seeing how Wallars go in a limited trial run in certain locations.

Second, precedent shows that banks are not good at innovating until they absolutely have to and that intra-industry competition is not enough to keep things moving. This is probably in part because questions like "Is it profitable to provide financial services for rural customers?" have different answers depending on which industry is asking.

It's all part of the bigger picture of technology shoving different industries together, simply because it's more efficient. For example, Walmart is already one of America's largest trucking companies. Its 8,000 drivers, 6,000 tractors and 60,000+ trailers give it one of the largest fleets in the country.

The reason this is now a more efficient system than relying on third-party trucking companies is because of all the technology behind it. Technology needed to make trucks sufficiently reliable and safe before personally maintaining a fleet of that size became cost-effective, and getting the most out of it means having the tech to optimise fleet efficiency when making deliveries across the entire country.

At a certain point, we should just accept that every large company these days is in the same amorphous "tech company" bucket.

"We are building a tech organization... I've got a machine learning team. We have some of the best apps in the world... We don't get a ton of credit for being a tech company, but we have been for a long time."

Meanwhile, Fidelity is spending some $2.5 billion on technology per year, and to simultaneously quote executives from Goldman Sachs, ING, Citi, JPMorgan, Deutsche Bank and more: "We are a technology company (with a banking license)"

Facebook is also a technology company rather than a book of portrait photos.

The more technology advances, the more important cross-industry disruption becomes. We can't hold up finance as some kind of sacrosanct silo forever. Rather than asking whether companies like Facebook and Walmart should be allowed to act as banks, we need to be asking how we can safely facilitate the inevitable movement of other industries into banking services.