Big tech including Tesla, Apple could lead market out of its gloom 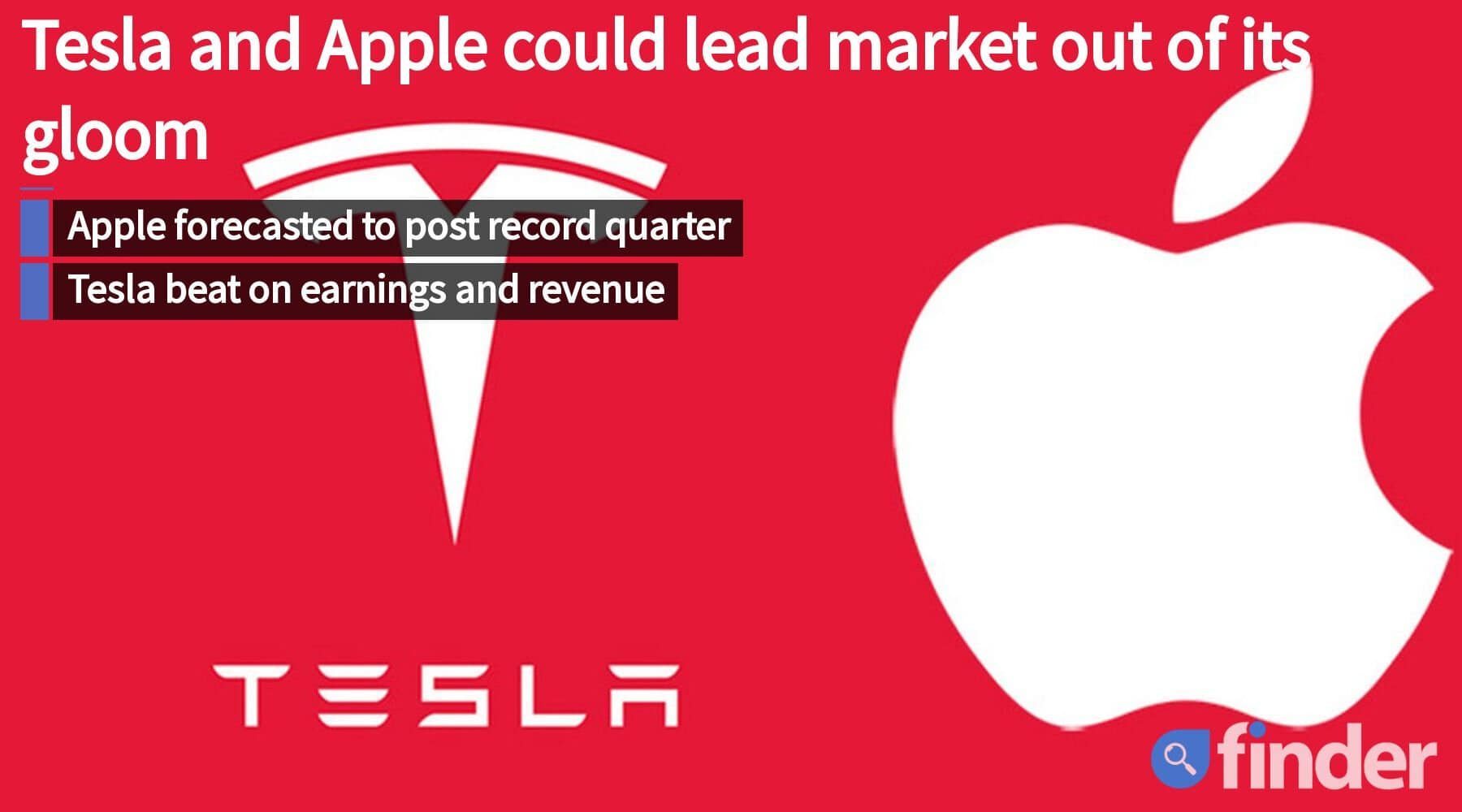 Volatility continues, but so far earnings from the tech giants have been positive and the outlooks encouraging.

The US market finally had a good day Wednesday — well, sort of.

The Nasdaq Composite and S&P 500 staged a turnaround Wednesday morning US time on positive earnings news from Big Tech. Then things slipped.

The Nasdaq just finished in positive territory Wednesday, ending the day up with nominal gains of 0.02%. The S&P 500 gave up its gains and ended in negative territory, down 0.15%.

Thursday looks much the same, with early gains fading into the afternoon.

Much of the positive action has been driven by Big Tech names reporting earnings. Microsoft's (MSFT) earnings and outlook, reported after the close Tuesday, lifted spirits with an upbeat forecast. Tesla (TSLA) reported after the bell Wednesday, echoing strong quarterly financials.

Now we have Apple (AAPL), which reported Thursday its best revenue quarter yet, with sales up 11%. Will this strong report from another Big Tech lift tech stocks out of what's been a two-month rout? If not, Alphabet (GOOGL) and Meta Platforms (FB) report next week.

It could also signal a buying opportunity as fundamentals of major tech players remain intact. Microsoft dropped as low as US$276.05 earlier this week to its lowest price since last summer. The stock's now back over US$300 — nimble traders made quick cash.

Wall Street was forecasting that Apple will report US$118.66 billion in revenue and earnings per share of US$1.89. Apple handily beat both numbers, with revenue of US$123.9 billion and EPS at US$2.10. It also said supply chain issues are easing.

Apple is also coming off a recent milestone, having surpassed the US$3 trillion mark in terms of market cap, the first company to do so. It briefly hit that milestone on January 3, only a few days after the company's second quarter of fiscal 2022 began.

Analysts see the stock climbing 11% over its current price to US$180.94. Of the 38 analysts covering the stock, 32 give it a Strong Buy or Buy, versus six Holds and no Sells of any kind.

The company posted earnings per share of US$2.48, beating Wall Street estimates of US$2.31. Revenue increased 20% from a year earlier to US$51.73 billion, which was expected by analysts.

Microsoft Cloud revenue jumped US$22.1 billion, up 32% year over year, on strong bookings growth driven by long-term Azure commitments. Microsoft's Xbox content and services revenue increased by 10%. The company's gaming business is in the spotlight after it said it would acquire Call of Duty publisher Activision Blizzard for US$68.7 billion.

Looking ahead, Microsoft finance chief Amy Hood said on Tuesday's earnings call that the company expects revenue of US$48.5 billion to US$49.3 billion in its fiscal third quarter, which tops Wall Street consensus of US$48.95 billion.

Shares of Microsoft closed Tuesday down 2.66%. The stock climbed 2.85% Wednesday.

A solid 27 of 34 analysts covering Microsoft have called it a Strong Buy or Buy, versus just six Holds and one Sell. The average 12-month price target on the stock is US$370.89, which is a 21% premium over its current price.

Tesla beat on earnings and revenue

Tesla reported fourth-quarter results on Wednesday that also came in stronger than expected.

The company posted earnings of US$2.54 per share, beating analyst estimates of US$2.36. Revenue rose 65% year over year to US$17.72 billion, versus US$16.65 billion expected, on account of strong growth in vehicle deliveries. Tesla saw record vehicle deliveries of 936,172 in 2021.

Tesla saw a drop in its energy generation and storage segment, which includes its solar panels, its Powerwall storage device for homes and businesses, and its utility storage units Megapack and Powerpack. Revenue was US$688 million, which was down 8.51% from last year. This was the lowest revenue for that division since the first quarter of 2021.

Supply chain constraints and labor challenges were two of the main limitations to Tesla factories running at full capacity. Going forward, Tesla sees supply chain issues persisting through at least the next year.

"Our own factories have been running below capacity for several quarters as supply chain became the main limiting factor, which is likely to continue through 2022," the company said in a shareholder deck.

Tesla shares closed higher 2.07% Wednesday at US$906 before falling roughly 4% in extended trading after the bell. The stock continued its decline Thursday morning, hitting a low of US$857.90 shortly after the market opened.

Tesla has 23 analysts covering the stock, of which eight call it a Strong Buy or Buy. Another eight give it a Hold, six put it at Underperform and one gives it a Sell.

The consensus price target is US$943.40, roughly 8% higher than its current price.

Alphabet (GOOGL) is slated to report its fourth quarter 2021 earnings on February 1. Analysts are expecting Alphabet to deliver a year-over-year increase in earnings on higher revenues. Wall Street consensus has Alphabet reporting US$72.09 billion in revenue and earnings per share of US$27.40.

Meta Platforms (FB), on the other hand, is expected to see declining earnings on higher revenue when it reports on February 2. The social media giant is expected to post quarterly earnings of US$3.84 per share in its upcoming report, which represents a year-over-year change of -1.03%.

Last week, streaming behemoth Netflix (NFLX) reported fourth-quarter 2021 earnings, beating on profit with revenue in line with expectations. The company posted earnings of US$1.33 per share, compared to US$0.82 expected.

But shares of Netflix plummeted more than 20% after releasing its earnings thanks to slowing subscriber growth.

These tech stocks have an outsized impact on the market — so, good or bad, their earnings results are worth watching.

But don't expect selling to be over just yet for tech stocks. The Fed's pivot toward higher rates, which it is singallong could happen in March, could continue its chokehold.