How the Big Bash is keeping the Ashes alive, and why ODIs are pointless 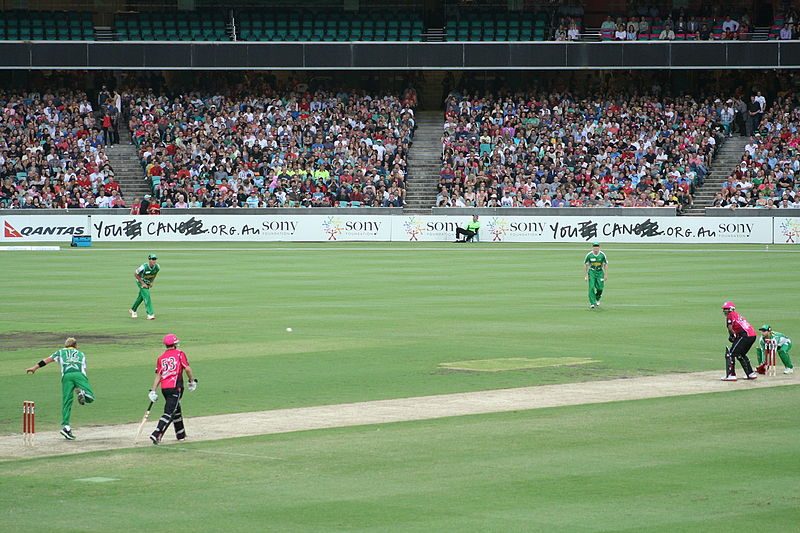 I don’t get the point of ODIs and here's why.

Hot on the tails of an exciting third Ashes test in Perth, featuring Steve Smith’s record-breaking 239 and humiliation for England, the Big Bash Season 07 kicks off across the country today. The competition has come a long way since its inaugural season in 2011. I’ve written before about attending one of the first games at the SCG, where an unexpectedly large crowd turned up and swarmed the few bars that were open at the stadium.

When the league’s popularity started to grow, I heard many cricket aficionado friends complain that T20 was for the part-time cricket fan, and predict the slow death of cricket as a result. But how has the Big Bash actually affected cricket attendances in Australia since it launched? 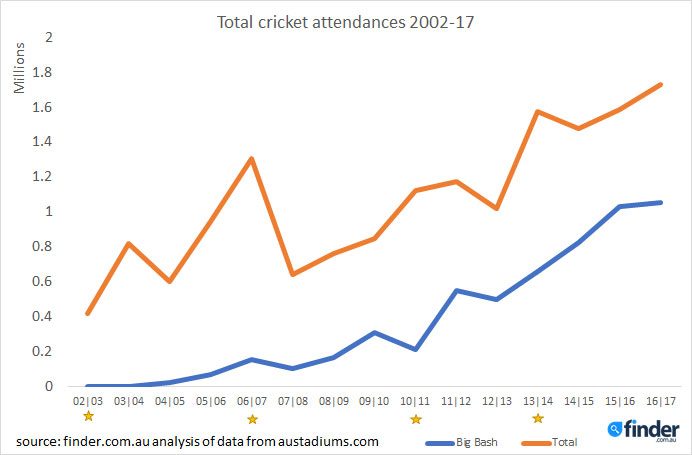 The chart above shows the total audience attendance figures for all professional cricket events in Australia from 2002-2017, including test (five days), Twenty 20 (3 hours, 20 overs pre side) and ODI (One Day International, 7-8 hours, 50 overs per side) games. The stars represent the summers that featured an Ashes test, where the most famous rivalry in cricket leads to a significant jump in attendance.

As you can see, attendance is on the up, with a record 1.7 million tickets for various cricket events sold in Australia last summer. The lower line depicts the Big Bash League’s share of those numbers, and also includes its predecessor competition, the KFC Twenty20 Big Bash up to 2010. The effect of the launch of the entertaining BBL is clear. This looks even more dramatic when you pull Big Bash games from the figures entirely. 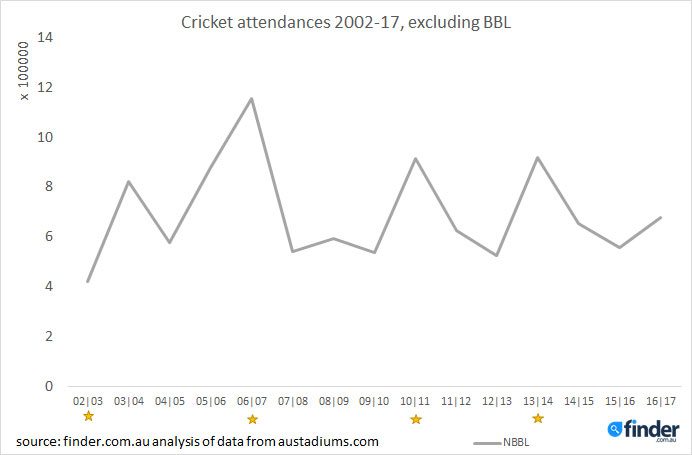 Once the BBL figures are removed, cricket attendance in Australia looks fairly flat, with a slight upward tendency. There is minimal significant increase in attendance over time, with the only effect on audience figures being the Ashes tournament roughly every four years. The Big Bash League is, therefore, the main driver behind the growth of cricket in Australia right now. The BBL nailed its marketing from day one, selling a kid-focused, family-friendly product with cheap tickets. For thousands of kids across the country, BBL will now be their first experience of live cricket.

I’ve been thoroughly enjoying this year’s Ashes series, but it was T20 that got me interested in learning more about test cricket. However, having come into cricket only relatively recently, I’ve never quite understood the point of ODIs. I get the history – they provided a nice, tidy, one-day format when the only other option was test cricket. However, in a world with T20, they’re dull as hell. Limited overs cricket will never represent a full fight between bat and ball, and if you’re going to limit the overs, 100 is just too many. Try sitting through a dreary 7-hour India v Australia ODI at the SCG, with a tired, end-of-career Sachin Tendulkar lazily clocking up the runs, with only half-strength beer to dull the pain and you’ll know what I mean.

It seems the Australian public agrees. Cricket’s halfway-house may be the true victim of the growth of the Big Bash League. ODI attendances are way down on pre-BBL days, as can be seen in the chart below. 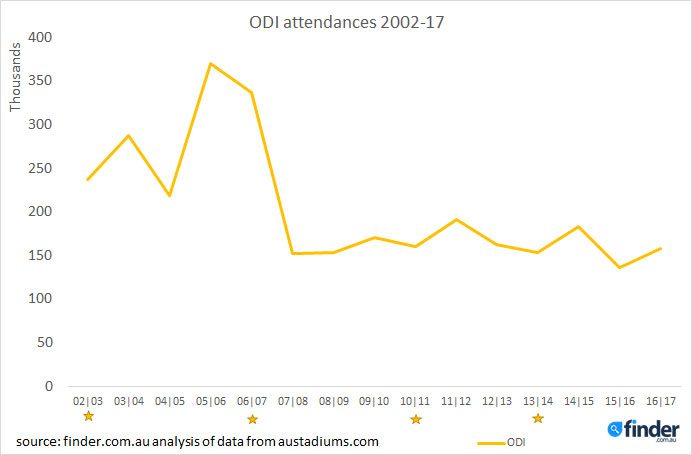 Time will tell whether this year’s Big Bash tops last year’s records, but after three thrilling Ashes tests, it has a high bar to climb this year. I’m just hoping all the kids are still tuned in when the coloured shirts go back to the dressing room and the white ones come out again.