Best zombie board games in Australia

Our team examined hundreds of customer reviews and ratings to find the six best zombie board games available online.

Board games
Buy board games online

The best zombie board games in Australia

For this list, we chose zombie board games based on actual customer reviews and ratings on Amazon. For every category, we carefully chose parameters based on our research and determined products with the highest review score within those parameters. 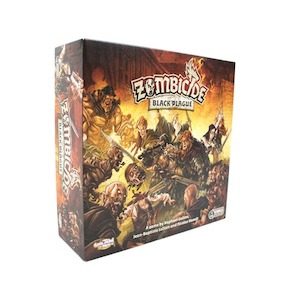 For the best overall zombie board game, we picked Zombicide: Black Plague. It has a rating of 4.7 out of 5 stars on Amazon.

In Zombicide: Black Plague, players control paladins, dwarves, knights and magicians to defeat the zombies and their overlords. They must also try to stay alive while doing their best to take back the world and defeat those who caused the apocalypse. Each player has swords, crossbows and magic spells. They can also use armour and spellbooks to win against the enemies.

This award-winning board game is a fresh take on the classic Zombicide. It requires a lot of teamwork to slay all the zombies, but people also love playing it solo. Zombicide: Black Plague has some complex elements and involved strategies; however, it's still approachable enough for both kids and beginners. It features a lot of adventures, making it highly replayable, but set-up can be a drag – you need to position a lot of figures to start the game. It's also more expensive than other zombie board games out there. 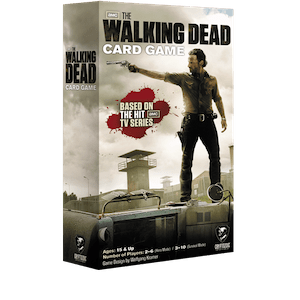 For the best overall zombie card game, we recommend The Walking Dead Card Game, which has a rating of 4.0 out of 5 stars on Amazon.

Based on the hit The Walking Dead series, this card game of zombie survival is suitable for three to ten players. Players compete in either Hero or Survival mode. In Hero, players try to kill as many zombie cards as possible to get the most points in every round. In Survival, they must avoid getting any zombie points, as the player with the lowest points wins.

The Walking Dead Card Game is a simple zombie game suitable for all ages. It contains over a hundred cards featuring some of the series' beloved characters. Inspired by the 6 Nimmt! game by Wolfgang Kramer, it is easy to learn and has quick gameplay, taking about 15 minutes per session. It involves a lot of strategies, but people said it's still easy enough for kids. However, the directions are difficult to understand. Several customers also said it gets tedious after a few rounds. 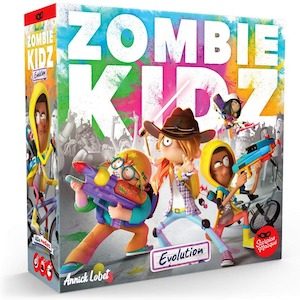 With a rating of 5.0 out of 5 stars on Amazon, we selected Zombie Kidz Evolution as the best zombie board game for kids.

In Zombie Kidz Evolution, zombies attack a school, invading its entryways and barring the players from getting to classrooms. Players must move through rooms and hallways to kill zombies and keep the zombie reserve full. To win, they must lock each of the four entryways while preventing the zombies from infiltrating the building. As players complete missions, they can track their progress through a trophy-stick system. They can also open mystery envelopes from the set to make the game more challenging.

Zombie Kidz Evolution is a legacy-style game for kids. It requires cooperation and strategies to prevent the zombies from invading the school. People loved its simple rules and quick gameplay. It also transforms into a more challenging but thrilling game as it progresses. One customer also praised its engaging theme, adding that the artwork really captured the game's narrative and gameplay. However, it's not suitable for more than four players. It also features over 50 missions and challenges. But once you finish these, you already know how the game will always end. 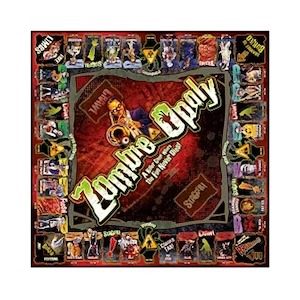 For families, Zombie-Opoly is our pick for the best zombie board game. It has a rating of 5.0 out of 5 stars on Amazon.

This board game allows players to buy their favourite zombies and increase rent by getting boxes of flesh, trading them for a screaming human. Players can also be buried underground and try to claw their way out to the surface for three turns. It has the same mechanics and goal as the iconic Monopoly – players must race to get the most riches to win. But this time, it's got a zombie spin. The properties are zombie-themed, and the hotels and houses are boxes of flesh. It can be played like the traditional Monopoly or as a quick 30-minute competition.

This fresh take on the classic Monopoly game is suitable for all ages. It's got some cool zombie-themed player pieces like a shovel, severed ear, zombie boy and human remnant. It also features a Crawl card where players must crawl while muttering "Brrrrrains!" in an effort to get $20 from each player. Apart from being easy to learn, people loved the game's artwork and adjustable gameplay. It requires a bit of strategy and problem-solving skills, but it's still simple enough for younger players. However, it can still get very competitive like the original Monopoly game. Several customers also said the cards are flimsy, but this seems to be a minor concern. 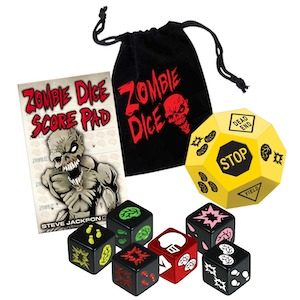 We chose Zombie Dice as the best zombie board game for parties. It has a rating of 4.2 out of 5 stars on Amazon.

In Zombie Dice, players take turns rolling dice three times, attempting to get brains and not shotgun blasts. If a player has three shotgun blasts, they won't get any points. Otherwise, they will gain points depending on the number of brains they rolled before ending their turn. The first player who scores 13 brains wins. The set contains 13 dice in three colours. The green dice have the most brains, the yellow dice have just about an equal amount of brains and shotguns and the red ones have the most shotguns.

Many customers loved Zombie Dice's quick gameplay and simple rules that everyone can learn in mere minutes. It's a casual board game that doesn't involve strategies but is challenging enough to keep players engaged. Since it doesn't have assigned characters and components, it can also be played by as many people as possible. However, winning heavily relies on luck. Experienced gamers also found it repetitive and tedious but added that Zombie Dice is a light zombie-themed game for gatherings. 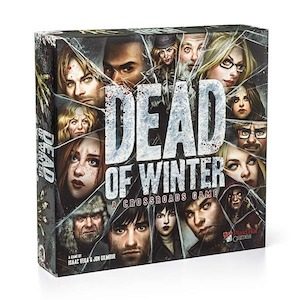 If you love role-playing, you might like Dead of Winter, which is our pick for the best zombie role-playing game. On Amazon, it has a rating of 4.6 out of 5 stars.

In Dead of Winter, players must work together toward one common victory condition, but they must also complete their secret objectives. If the team reaches the overall goal, they win. Moreover, if a player completes their personal goal, they are also victorious. However, the game's hidden objectives aren't all for the greater good. There is a chance that one of the players has the traitor objective, aiming to make the colony fall and lose its morale.

Dead of Winter is a pseudo-co-op board game where players take on the roles of leaders, commanding a group of survivors with their own dilemmas. It has a gripping narrative, requiring the players to focus and create various strategies. People said gameplay gets intense and challenging, which might overwhelm beginners. Dead of Winter is also extremely replayable, offering different scenarios and characters to explore. Each game is different from the last. However, one critic said that the downtime between turns is too long but added that this isn't really a deal-breaker.