The untold story of State of Origin legend Brett Hodgson 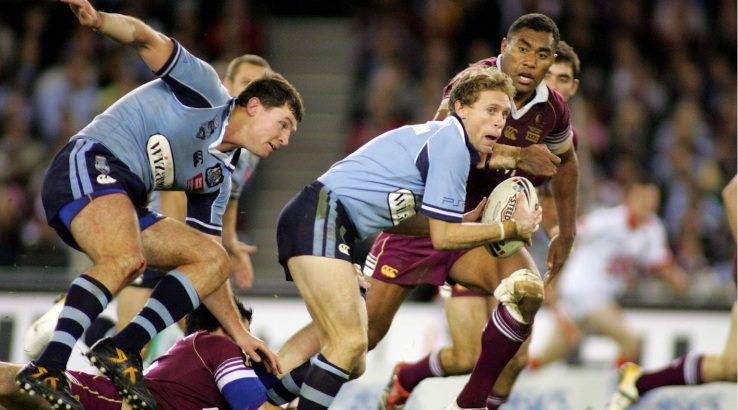 Three fullbacks had a better claim to the NSW State of Origin team for Game 1 of the 2002 series than Brett Hodgson.

There was Newcastle incumbent Mark Hughes, who had taken the custodian role in all three of the 2001 games. There was the legendary Tim Brasher, a veteran of 21 NSW games and a class above his teammates in the struggling North Queensland Cowboys. While at the resurgent Cronulla Sharks, David Peachy had four origin jumpers (1 ARL and 3 Super League) etched against his name.

But it was Hodgson who got the nod.

Hodgson had left the Western Suburbs Magpies at the end of the 1999 season and joined the Parramatta Eels looking for a chance to play fullback. He had done well in the role and was certainly in good form. Ever reliable, strong in attack and a goal kicker, Hodgson was a fan favourite. He would end up fondly remembered for all his club performances when he finally hanged up his boots, 350 games and 147 tries in.

The year before his State of Origin debut, he had even played a vital role bringing Parramatta to a grand final against Newcastle. He scored two tries in that game, upstaging Mark Hughes despite his side’s loss.

But many doubted his 75kg frame was up to the rigours of State of Origin – the gladiatorial, win-at-all-costs battle renowned for its toughness and brutality. Peachy (90kg), Hughes (93kg) and Brasher (86kg) all had the measure of him there.

Exclusive: The Top 50 Rookie Performances in State of Origin history.

Adding to the pressure, his opposite number was the one and only Darren Lockyer. He would be the last line of defence against a backline that included Lote Tuqiri, Alan Langer, Darren Smith and Justin Hodges. And his carries would need to bust through a front line walled by Shane Webcke, Petro Civoniceva, Dane Carlaw and Gorden Tallis.

Hodgson never stood a chance, so it should come as no surprise that Tallis would write the headlines. Every year since 2002, footage of The Raging Bull dragging a helpless Hodgson 10m and throwing him over the sideline has been telecast. It’s the footage that confirms the doubters were right. Hodgson’s talent couldn’t outweigh his frame. Hodgson was too small for Origin.

Only that is not the true story. That was Game 2. What about Game 1? 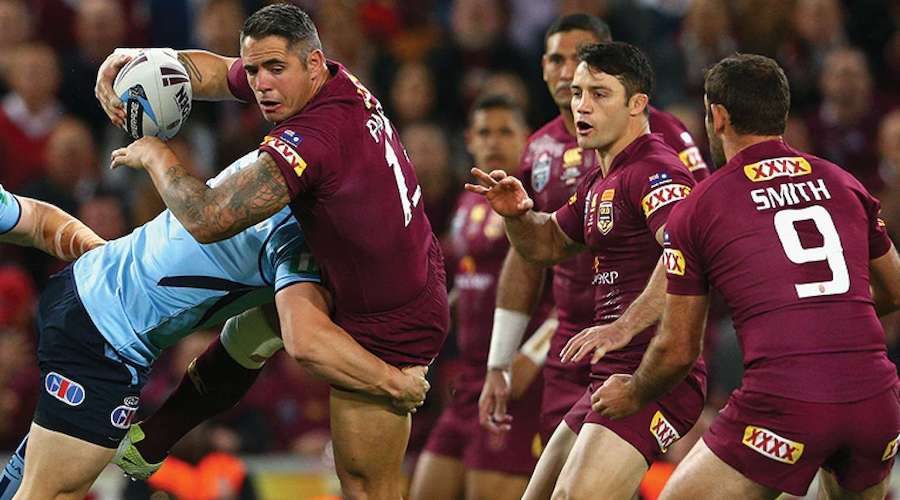 The greatest performance in State of Origin history

The numbers don’t lie. In the lead-up to Game 1 of the State of Origin 2018 series, finder.com.au – a major sponsor of the game’s coverage – began to crunch the numbers. With new coaches, major injuries, defections and big retirements driving a host of new team selections, 2018 is the year of the rookie. A host of fresh faces will be introduced to the State of Origin arena for the first time.

It made us wonder: what were the best rookie State of Origin performances of all time? So we assembled the player stats from all 38 previous years – all 3,648 of them. We then worked with an expert in fantasy rugby league algorithms to put together a scoring system to accurately rank and compare every performance. We then pulled out just the rookie performances: you can see our detailed results and the top 50 here.

His tally of 222 points smashes that of the next nearest rookie, the 150 points earned by Gary Belcher in Game 2 of the 1986 series, also at fullback. To bring Hodgson’s feat into perspective, the average score for a rookie in a State of Origin performances is 46. Hodgson’s Game 1, 2002 performance tops his nearest rival’s score by more than the average of every other player.

When we take rookie status out of the equation and look at any player regardless of State of Origin caps, Hodgson’s performance again wins by some margin. He is still a stunning 34 points above the Game 3, State of Origin, 1988 performance of prop Sam Backo, who registered 188 points.

It is, based on the numbers, the best performance in the history of State of Origin. It included a record 374 run metres, a whopping six line breaks, 14 tackle busts, a near length of the field try, a try assist and a goal. He made 21 runs, missed no tackles and made no errors.

And to add salt into the wound, it would be Andrew Johns who picked up the man of the match honours.

So let’s give credit where credit is due. As we ready for a series that may well go down in history as the year of the rookie, let’s doff a cap to not only the best rookie performance in State of Origin history, but the best performance full stop – Brett Hodgson, Game 1, State of Origin 2002.

Where to watch State of Origin 2018 online in Australia

The State of Origin is just around the corner. Make sure you’re able to grab a front seat to Australia’s greatest sports rivalry.