The best shower curtains in Australia

For this list, our editorial team chose shower curtains based on actual customer reviews and ratings on Amazon. For each category, we carefully selected parameters based on our research and evaluated products with the highest review score within those parameters. 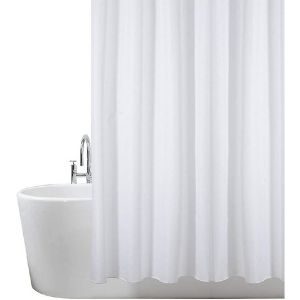 Our pick for the best overall shower curtain is the ANSIO Shower Curtain, which has a rating of 4.6 out of 5 stars from over 9,000 reviews on Amazon.

This shower curtain measures 70" x 70". It is made of 100% polyester that is mould and mildew resistant. According to the manufacturer, the curtain is also machine washable and can be ironed in low settings.

Customers praised the product's thick material, saying that the quality is comparable to more expensive shower curtains in the market. Apart from having 12 plastic hooks, the curtain has piping at the bottom hem to keep it weighted. Reviews also liked that it's easy to clean and is machine washable. Others praised it for being 100% mould and mildew resistant. However, some customers complained that it tends to stick to the skin during showers, while others found it too short for a standard shower. 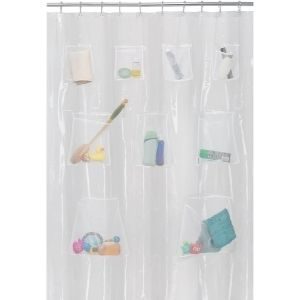 Maytex's Clear PEVA Shower Curtain with Mesh Pockets is our choice for the best clear shower curtain available online. On Amazon, it has a rating of 4.5 out of 5 stars from more than 8,000 customer reviews.

This shower curtain is made of clear, chlorine-free PEVA and includes nine mesh pockets for organisation. It measures at 70" x 72", which fits most standard bathroom showers. According to the company, the curtain can also be cleaned using a damp cloth.

The curtain's material is sturdy and doesn't move when there is an airflow inside the bathroom. Customers also said that it protects against splashes and doesn't get mouldy over time. It is waterproof and easy to clean with just soap and water. Some also raved about the mesh pockets, as it helps organise toiletries. However, the pockets can't hold items heavier than 1lb. The curtain also doesn't come with hooks, which may be a disadvantage for some. 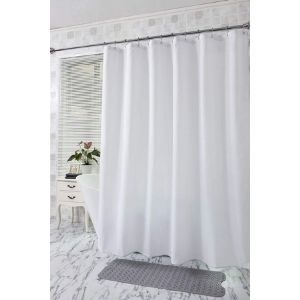 If you're looking for the best mildew resistant shower curtain, we recommend the LiBa Cloth Fabric Bathroom Shower Curtain. It has a rating of 4.3 out of 5 stars from over 1,500 Amazon reviews.

The LiBa shower curtain is made of water-repellent polyester fabric. It has a smooth yet textured design that is resistant to mildew, creasing or shrinking. The protective PE coating also enhances its water-repellent properties. It measures at 36" x 72", which may fit most standard showers.

Customers praised the curtain's quality, adding that it's quite thick and durable. Some even mentioned that their LiBa shower curtains have lasted for years. It is easy to clean as well – you only need to give it a quick water rinse and a wipe down. Apart from reinforced holes, the curtain has a weighted hem, ensuring that it stays in place and keeps splashes off the bathroom floor. However, it is too short for some customers' showers. Others were also disappointed that it doesn't have enough holes for hanging. 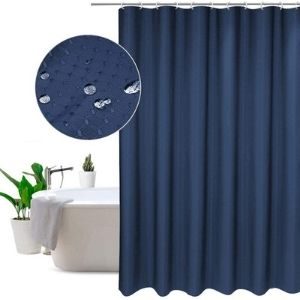 We selected the EurCross Waffle Weave 72" x 94" Shower Curtain as the best extra-long shower curtain you can get in Australia right now. It has a rating of 4.7 out of 5 stars from over 400 Amazon reviews.

This shower curtain measures at 72" x 94" and has 12 metal grommets. It is made of 100% polyester with a waffle-weave design. According to the manufacturer, the material is heavy duty and water-resistant. It also has a weighted bottom, and a thick premium fabric doesn't stick to the body when showering.

Thanks to its weighted lead liner, the curtain doesn't flutter around the bathroom. Customers liked the length of the curtain, making it ideal for both standard and bigger showers. Some also enjoyed the waffle design as it gives elegance to their bathrooms. It is machine washable as well. This shower curtain is more expensive than others in the market, but customers said the thick fabric and performance justify the price. However, there were complaints about it not being mildew-resistant, with some reviews adding that the curtain has to be cleaned often to prevent mildew from forming. 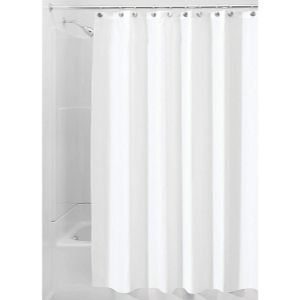 For the best waterproof shower curtain, we chose InterDesign's Waterproof, Mould and Mildew Resistant Fabric Shower Curtain. It has a rating of 4.4 out of 5 stars from over a thousand customer reviews on Amazon.

At 72" x 72", this InterDesign curtain fits most standard showers. It is made of quick-drying, durable polyester that is soft to the touch, according to the company. It also has reinforced buttonholes and a weighted bottom hem that helps the curtain stay in place. The fabric also has a waterproof coating that allows water to glide off and resist soaking.

Apart from being waterproof, customers praised the product for being mould and mildew resistant. Others also liked that it's affordable but performs comparably to pricier shower curtains. The fabric is thick and durable as well. It is easy to clean –you only need to put it in a washing machine with a mild detergent. However, some customers said the curtain sticks to the skin during a shower, which could be annoying. Others also found the fabric too rough. 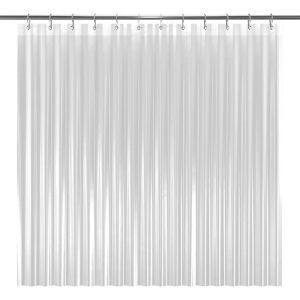 Our pick for the best shower curtain liner available online is LiBa's Mildew Resistant Anti-Bacterial PEVA 8G Shower Curtain Liner, which has a rating of 4.6 out of 5 stars from over 80,000 Amazon reviews.

According to the company, this shower liner undergoes a mildew treatment process to last four times longer than other liners. It is also made of non-toxic, chlorine-free PEVA material that is durable and easy to clean. At 72" x 72", it fits most standard showers. The liner comes with heavy-duty magnets at the bottom to help it stay in position. The 12 rustproof metal grommets and reinforced header also help prevent tearing and sagging.

Many customers praised the product for being waterproof and mildew resistant. It is easy to clean as well. Despite being thick and sturdy, the material is lightweight. Reviews also liked that the weighted hem keeps the liner in place even if there is a strong airflow. For some customers, the liner is too short even for their standard-sized showers. Others were also disappointed that it comes with only three magnets at the bottom but added that it doesn't affect the performance of the shower liner.