Want to improve your gaming experience on the PlayStation 4? These are the best PS4 controllers according to our experts.

The best PS4 controllers in Australia

Our editorial team selected the PS4 controllers in this list based on our own reviews, customer reviews on websites such as Amazon and professional reviews weighted against each other. This accumulated data was used to determine our overall winners for each different category. For each category, we carefully selected parameters based on our research and identified the products with the highest review score within those parameters. Buy at AmazonBuy at CatchBuy at Kogan

Coming in with an average customer review score of a 4.6/5 on Amazon and eBay, the official DualShock 4 remains a reliable option if you're looking to pick up an additional or replacement controller. While it might lack the customisability of some other third-party options, its general design is synchronised with the aesthetics and functionality of the PS4 itself.

Ergonomic touches like the concave analogue sticks and curved triggers make using the controller consistently comfortable. Although in bigger hands, its minimalist and symmetrical design might lead to discomfort.

Unfortunately it's slightly let down by its persisting inability to disable its lightbar, which does little to help its lower battery life (sitting at around 8-10 hours.) Furthermore, the shallow "Share" and "Options" button can be uncomfortable. Despite its flaws, it remains a reliable controller going for an agreeable price. Being billed as a high end competitive controller, the Astro C40 TR's price point certainly isn't for everyone, but with a high average 4.1/5 customer review score on Amazon, it's one of the best premium controllers if you have the money to spend. Customers have praised its durable build and matte rubber finish which does wonders for its overall grip.

When it comes to customisability, the Astro C40 TR has it in spades. The controller boasts two programmable back paddles, and while this is less than other similar controllers, their high quality and integrated build more than makes up for it. While the inability to program the paddles on the controller itself may deter some, Astrogaming's PC software is reportedly easy and reliable to use.

Mappings are saved to the controller itself meaning you can easily switch between them using the included switches, and play across several devices without any concern, perfect for the C40 TR's targeted tournament scene.

The C40 TR's analogue sticks and D-pad can be removed and repositioned at will. If you're someone who prefers the Xbox's offset analogue sticks to the PlayStation's symmetrical design the Astro C40 TR has you covered. Whether you're looking for a competitive advantage, or have the cash to splurge on a fancy new controller, the Astro C40 TR is an excellent option if you're looking for a controller that goes above and beyond. 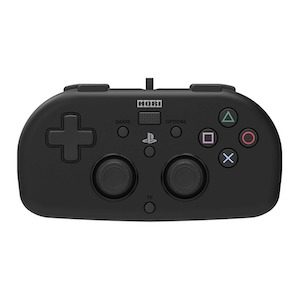 The Hori Mini Wired Gamepad might not be for everyone with its shockingly small size, but with a 4.6/5 score from 700 Amazon reviews, the tiny controller certainly succeeds in what it sets out to do.

Both Hori and Sony have positioned the Hori Mini Wired Gamepad as a controller for smaller hands and children in general. Its smaller size is suited well for similar hands, and while the subtraction of more advanced functions (such as rumble, motion controls, etc) may seem disappointing, their absence does ultimately result in a controller that should survive more drops and falls. Even though the controller lacks a proper touchpad, its functionality is substituted through the touchpad replacement button and control sticks meaning all PS4 games are playable on the tiny pad.

Even if you're not picking it up for a smaller player, the Hori Mini Wired Gamepad does still have its appeal. Its smaller size makes it ideal for a backup or travel controller, and the price point is certainly easier to fork out than that of the DualShock 4's. You might have to overcome some grievances with the smaller size, but the Hori Mini Wired Gamepad delivers a fully functional PS4 controller for a fraction of the price. 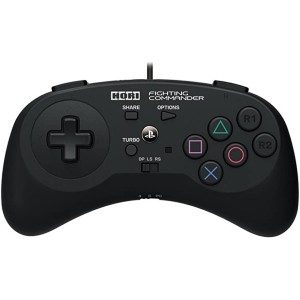 Buy at AmazonBuy at KoganeBay

The Hori Fighting Commander may be more niche than other general controllers on the market, but with a high 4.5/5 score from over 800 Amazon reviews, the Fighting Commander proves to be a strong option for those dedicated to the fighting game genre.

Customers have given positive feedback on the build quality of the controller, citing it as a comfortable and hefty alternative to the standard DualShock 4. The D-pad's design offers greater precision to the DualShock's split D-pad and the soft shallow design of the face buttons provides snappy and responsive inputs. Furthermore, the six face button layout grants a more natural feeling to playing fighters.

The controller's lengthy 10ft cable provides versatility whether you want to use it in a tournament setting or at home on the couch, even if the excessive length may cause problems with it getting in the way.

Because of the controller's redesign, it doesn't fare as well when trying to play games beyond its core demographic. Being a fighting gamepad, the controller obviously isn't designed to do so, but that does mean the Hori Fighting Commander 4 is better suited as an additional controller, rather than a replacement for your rundown DualShock 4. 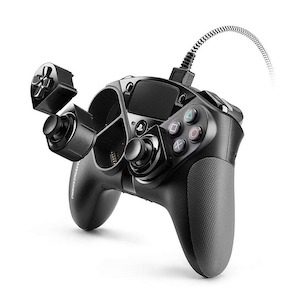 Buy at AmazonBuy at KoganeBay

With an average customer review score of 3.6/5 on Amazon the Thrustmaster eSwap Pro isn't the highest rated third party controller, but when it comes to customisation options you'd be hard pressed to find a controller that offers more versatility.

Like other similar controllers, its modular design allows you to manually switch the positioning and layout of the D-pad and analogue sticks as you see fit. Even aspects such as the shape of the analogue sticks and triggers can be altered. Where the eSwap Pro goes one step above is its options in the aesthetic department. The appearance of the button backplates, and even handle grips can be switched out for other colours and designs.

Remapping of the controller is required to be completed through an external PC software, but the controller allows you to switch between different profiles on the fly. Its customisability is further bolstered by an additional four buttons on the back of the controller, although their small size and sensitivity caused complaints from some customers.

While the Thrustmaster eSwap Pro might be held back due to its lack of wireless connection and finicky back buttons, the controller is certainly a good option for those looking for a little more flexibility in the way their controller looks or performs. 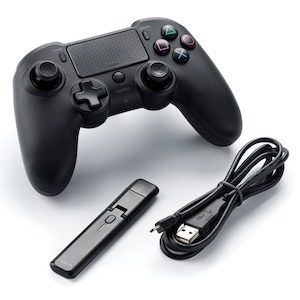 Buy at AmazonBuy at CatchBuy at Kogan

Unfortunately, the controller lacks some of the extra bells and whistles of the DualShock 4 such as the light bar, motion sensor and built in speaker options. Strangely, it does feature a prominent battery indicator light which seemed to cause distractions for some customers.

Furthermore, its dependence on using a USB dongle for connectivity may cause some issues depending on how your PS4 is set up. It might not work as seamlessly as the standard DualShock 4, but if you find yourself with a preference for the Xbox style of controller design the Nacon Asymmetric Wireless Controller should serve to scratch that itch.

6
Best controllers chosen
Was this content helpful to you?
Thank you for your feedback!

Ethan Rabbitts is a contributor for Finder.