We read hundreds of customer reviews to find the best kitchen scales you can buy online in Australia.

The best kitchen scales in Australia

Our editorial team selected the kitchen scales in this list based on extensive research and real customer reviews. For each category, we carefully selected parameters based on our research and identified the products with the highest review score within those parameters. 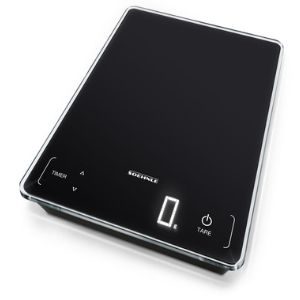 The Soehnle Page Profi 100 Digital Kitchen Scales was one of the highest-rated overall kitchen scales according to nearly 900 Google reviews, with a 4.7 out of 5 stars rating. Many liked the size and thinness of the scales, noting that it was easy to store away but could also accommodate larger bowls. Reviewers also liked that it had a larger weight range than other digital products, was simple to use and did not turn off while still in use.

The Soehnle Page Profi 100 Digital Kitchen Scales has a weight capacity of 15kg and is highly accurate in its measurements, rounding to the closest single gram. Its interface is a touch sensor, contains a timer and has an energy-saving feature, tare feature as well as a "hold" feature that accommodates for items that may be larger than the face of the scales. It is made from safety glass and plastic and comes with a hanging device for easy access in the kitchen as well as batteries for use. It comes with a five-year warranty and is easily cleaned with a cloth. 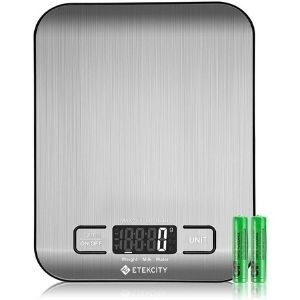 The Etekcity Food Digital Kitchen Weight Scales EK6015 Backlit Stainless Steel was one of the highest-rated digital kitchen scales according to over 60,000 Amazon reviews with a 4.6 out of 5 stars rating. Many liked that the tare button was easy to control and meant they didn't need to shift container items into bowls to measure. Reviewers also liked that the entire surface is functional, making it easier to weigh long items accurately.

The Etekcity Food Digital Kitchen Weight Scales EK6015 Backlit Stainless Steel has a weight capacity of up to 5kg with the capability to change between measurement units including oz, g, mL and lb: oz. It can easily weigh both solids and liquids and has a water and milk volume measurement setting, plus a tare feature. It is made of stainless steel and is easy to clean. The scales also has a backlight display for visibility and shows when the battery is running low. It is small and compact, making it easy to store in the kitchen and comes with batteries as well as a one-year replacement warranty.

The Taylor Precision Products Stainless Steel Kitchen Scales was one of the highest rated analog kitchen scales according to almost 3,500 Amazon reviews, with a 4.7 out of 5 stars rating. Many liked the look of the scales and preferred it as a centrepiece in their kitchen as opposed to digital scales that are often packed away. Reviewers also liked that it was well-made and sturdy as well as easy to use and clean.

The Taylor Precision Products Stainless Steel Kitchen Scales has a deep and wide bowl on top of the scales section that allows you to fit heavy and shaped items such as fruit and vegetables. It has a retro style and is made of stainless steel. It has a weight capacity of up to 5kg and the bowl is easy to remove and clean. The scales can be adjusted and set with the use of an adjustment knob at the bottom of the unit. The face of the scales features measurement units of grams and lb: oz. The writing is black and red on a white background making it easy to read. 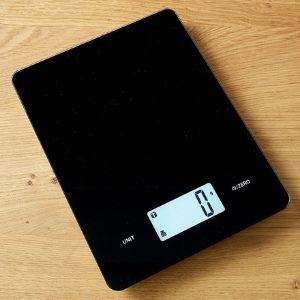 Buy at CatchBuy at Target

The Target Electronic Kitchen Scales was one of the highest rated cheap kitchen scales according to almost 100 reviews on the Target Australia website, with a 4.4 out of 5 stars rating. It also has a full 5 stars rating from 10 reviews on Catch AU. Many liked that the product was good value for money, easy to use and was not expensive to run as it functions with AAA batteries.

The Target Electronic Kitchen Scales is suitable for quick and easy measurements and can measure both weight and volume. It has a weight capacity of up to 5kg as well as an LCD digital screen. It is made of tempered glass and plastic and comes in the colour black. Its dimensions are 21cm x 16cm x 1.9cm making it easy to store away in the kitchen. It also comes with batteries. 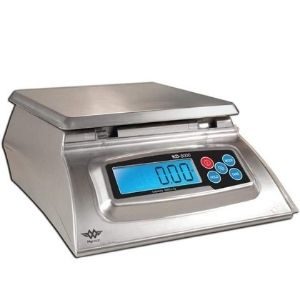 The MyWeigh KD8000 Bakers Maths Scales was one the highest rated kitchen scales for baking according to almost 2,000 Amazon reviews, with a 4.7 out of 5 stars rating. It also has a 4.8 out of 5 stars rating from over 70 Google reviews and a full five stars rating from 10 reviews on the Medshop website. Many liked that it was accurate, easy to use, read and clean and also had a tare feature. Reviewers also found it made baking easier through the use of the math/percentage feature.

The MyWeigh KD8000 Bakers Maths Scales is suitable for baking, having a math/percentage weighing function that allows the measurement of ingredients in proportion to the main ingredient of flour. Bakers like this functionality as it eliminates the maths that comes with measurements such as teaspoons, tablespoons and cups, opting for a percentage instead. This functionality makes increasing or decreasing portion sizes much easier.

It is precise in measurement, rounding to the closest single gram and reads in grams, ounces, kilograms, pounds and pound: ounces. The scale has a removable protective LCD display cover, a backlit display and can be programmed to turn off. It scored 84% in the Choice Digital Kitchen Scales review in 2017 and has a tare feature which removes the weight of a container. 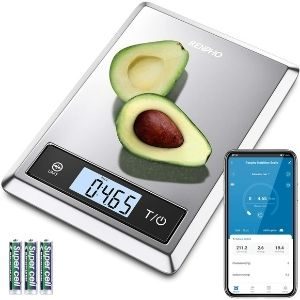 The RENPHO Digital Food Scales was one of the highest-rated smart kitchen scales according to almost 1,600 Amazon reviews, with a 4.5 out of 5 stars rating. Many liked the added benefits the app provided them, particularly the ability to weigh foods and then gain nutritional data as well as calories. Reviewers also liked that it was multi-use and could be used as traditional kitchen scales as well as for coffee.

The RENPHO Digital Food Scale allows you to track and record food data, calculate calories, and it provides a detailed food analysis through the use of the Gennec app. It is multifunctional in use being a nutritional scale, kitchen scale and coffee scale all in one. It has a weight capacity of up to 5kg and can measure as small as 3g, while rounding to the closest single gram.

It has the capability to change between measurement units including oz, g, ml and lb: oz and you can switch units either on the scales or through the app. It has four sensors to accurately detect weight as well as a tare feature to remove the weight of a container. It is made of stainless steel and glass, has a waterproof surface and is easy to clean. It has an auto-off function to save power and also comes with batteries.

For more information, check out our kitchen scales buying guide.

Valentina Todoroska is a reviews writer at Finder. She is currently the managing editor of Val Morgan Digital and was previously the lifestyle editor of 10daily (Network 10) and the managing editor of Mamamia. Her work has also been published in The Daily Telegraph and body+soul. Valentina has appeared on Studio 10 and 2GB. She has a Masters in Journalism and Communication from the University of New South Wales. Prior to entering media, she was a primary school teacher.