Best cars for dogs (and their owners)

Here’s everything you need to know about buying a car that is perfectly suited to your four-legged friend.

A 2016 report from Animal Medicines Australia estimates that there are over 4.8 million dogs in Australia, or one for every five people. From 2013 to 2016, 600,000 more families took on a dog as a pet. But dogs are much more than just a pet – they are part of the family. When it’s time to roll out as a pack, you can make the journey safer and more comfortable if you buy the right car for your dog.

Features of a dog-friendly car

Want your pooch to be safe, secure and happy when travelling? Look for the following criteria when considering a new car:

If you notice any of these behaviours, it could mean that your dog isn’t comfortable with your current car.

You know your dog best, but if they aren’t sitting or lying down in a car, they could be uncomfortable. If they keep trying to get into a snuggly position but can’t, the car seat may be too firm or the ride too harsh. If you notice your dog sleeps a lot or is fatigued after a journey, this may be hinting at the fact they couldn’t sleep while travelling.

If your dog ordinarily loves to go for a drive but is now refusing to jump in, something might be up. It could be your pet is associating this car with discomfort, trauma or a noise it doesn’t like. Some dogs are so nervous that even the sound of a power boot lid causes them to get into a stir.

When your dog suddenly develops carsickness, it might be a sign that the car isn’t quite right. The suspension might be too firm, the waistline might be too high so visibility for the dog is hampered or the ride might be wallowy and making your poor dog nauseous.

Small dogs can be so much fun! These energetic whippersnappers will fill your life with joy, and because of their diminutive size, they won’t fill your car. Still, they have the same needs as bigger dogs, apart from space. One thing to note, small and light cars we evaluated for dog friendliness didn’t score so well since they have small and cramped boots. Instead, we found the growing SUV market offered more practicalities for small dog breeds. 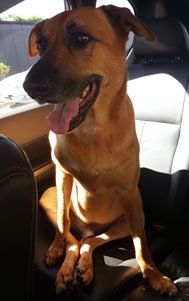 Should I restrain my dog in the car?

It is a sensible idea to restrain your dog, not only for their safety but for your own. If your dog is able to roam freely around the cabin, they could be a major distraction to you. Dogs can accidentally knock the window button or door handle by accident. Also, there have been cases where dogs have ended up in the right-hand footwell, hampering the driver’s ability to brake. You should never allow your dog to ride on your lap when travelling, in the event of the airbags deploying, your dog could be seriously hurt or killed.

An unsecured dog in the rear of the car could be thrown around in a crash, so consider buying and properly fitting a dog restraint for them. If all else fails, fitting a dog guard will prevent your pet from getting seriously hurt in an accident.

Yes and it is strongly advised you fit a harness for your dog in the car.

A properly fitted dog restraint won’t restrict your pet from moving, sitting, standing up or laying down. The safety anchor will stop your pet from jumping out of the window or getting thrown around if you have a bump. You can purchase restraints made of nylon, leather or fabric to suit your dog and dog safety belts can be secured to the seat belt or a cargo tie-down lashing point, depending on the design and construction.

You may choose to put your dog in a crate when travelling. Make sure to pick one that is appropriately sized for your dog. If the crate is too small, your dog may become stressed. RSPCA recommendations for dog transport containers include picking one that allows your dog to move around without hindrance. Ensure you secure the crate down with straps so it won’t move in a crash.

The RSPCA also says it is sufficient to have a dog unrestrained but sitting in the boot space with a cargo guard, but still recommends the use of a harness in these situations.

What is the law on restraining a dog in Australia?

The law varies from state to state whether you need to restrain your dog. Below, you’ll find the laws from each state or territory.

In addition to the above specific road rules, the RSPCA has powers to protect animals carried in vehicles.

Comparison of car loans you can apply for

ACCC chairman: Uber “cannot be stopped” Can you pay off your car loan early?

We've selected the 8 best ergonomic mice for you to make your home or office mouse use more productive and healthy.

Where to buy dog clippers online in Australia

This is where you can buy pet clippers online and have them delivered straight to your door.

We got behind the wheel of this opinion-splitting, ding-dong starting GR Supra in GT spec.

You'll receive a fixed rate of 5.29% p.a.
Take advantage of a competitive rate, pre-approval and no early repayment fees when you finance a car under two years old.

You'll receive a fixed or variable rate depending on the lender you are approved with
Apply for up to $250,000 and use cash or trade in a vehicle to use as a deposit. Optional balloon payment available.