Try one of Australia’s most popular bike sharing services

Our guide to the most convenient and cost-effective bike sharing services in Australia.

In response to growing demand, more and more companies are setting up shop in Australia, making bike sharing more affordable and convenient than ever before, especially for commuters who only need a bike for the last mile of their journey. We’ve compared four of the best bike sharing services across Australia to help you choose the right service for you.

Many dockless bike sharing companies are starting to pull their services out of Australian cities or withdrawing from Australia entirely, including oBike, Reddy Go and ofo. Strict helmet laws may be partly to blame for the low popularity of bike sharing services in Aussie cities compared to other countries around the world.

Prices are accurate at time of publication, however they are subject to change.

What to look for in a bike sharing service 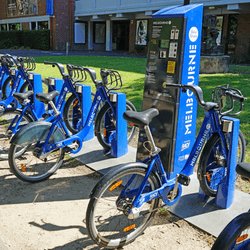 Melbourne Bike Share, the first city-wide bike sharing system in Australia, launched in 2010 with a fleet of easily-recognizable, bright-blue bikes. Melburnians and tourists aged 15 and over can download the Melbourne Bike Share app and use it to locate a nearby station. You can check out a bike by inserting a credit card or member key into a kiosk.

You can use the bike for up to 30 minutes (or 45 minutes with an annual pass) before you have to return it to another dock, and check it out again. You will not be charged again, the system will simply verify your identity so you can continue using the bike.

Unfortunately, if you want to use the bike all day you must repeat this process every 30 (or 45) minutes. If you fail to do so, you will be charged an additional fee.

If the station where you plan to return your bike is already full, you can use your credit card or key to identify yourself at the kiosk and receive an additional 15 minutes to find an available station, which you can do easily by using the Melbourne Bike Share app to check live updates on station availability.

You can get a day pass for $3, giving you unlimited 30-minute rides in a 24-hour period. An $8 weekly pass with the same conditions is also available, as is a $60 yearly pass, which gives you unlimited 45-minute rides for a whole year.

According to Melbourne Bike Share, not all bikes will include a courtesy helmet but you can use the app to find a helmet retailer within 300 meters of every station where you can purchase a helmet for just $5. Bikes include unisex saddles, front and rear reflectors and sturdy frames. 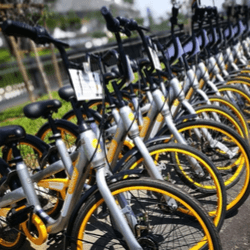 oBike is a Singaporean bike sharing company that has expanded to 24 countries around the world and arrived in Australia in 2017. The company received some negative attention when it first launched as Melbourne's first dockless bike sharing service.

The service was unfortunately abused by a number of customers who left their bikes in inconvenient and hazardous spots, like up in trees or even in the Yarra river. However, many Aussies have since embraced the benefits of dockless bike sharing and oBike’s yellow cycles can be found all over Sydney and Adelaide. oBike pulled its services out of Melbourne in 2018 after the EPA instituted a hefty fine for bikes left in hazardous and illegal locations.

To use an oBike, download the oBike app and use it to reserve and unlock a nearby bike. When you are finished with your ride, you can park the bike at any designated public bike-parking area and use the app to lock it.

Rides start at $1.99 for 30 minutes, but pricing can vary based on oBikes credit system. When you register with oBike you will be given 100 credits. Well-behaved users will be awarded additional credits and benefits, while rule-breakers will be deducted credits and charged higher rental rates.

oBike does not guarantee helmets with its bikes and encourages users to bring their own. Bike features include wide handles, adjustable seats and sturdy frames. CityCycle bike sharing is an initiative by the Brisbane City Council to encourage Aussies to ride bikes more often in an attempt to reduce traffic, lessen parking congestion and improve the city’s public transport system.

The city-wide service helps commuters link buses, trains and ferries with over 2000 docked yellow bikes and encourages use by providing the first 30 minutes of every journey for free.

Anyone over the age of 17 can use CityCycle with a monthly membership of $5 per month, or $3 per month for students. A casual 24-hour pass is also available for $2. Users get unlimited 30-minute rides but like Melbourne Bike Share, CityCycle users must return their bikes to stations every half hour to avoid additional fees. You can check-out a CityCycle bike at any of the 150 strategically-placed stations across Brisbane.

If you try to return a bike at a station with no available racks, the station terminal will show you which nearby stations are still available and give you an additional 15 minutes to return your bike. CityCycle uses the “AllBikesNow” app but does not have an app of its own. 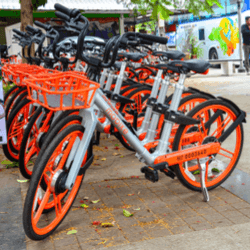 Mobike brought its silver-and-orange bikes to Australia in 2017, aiming to affordably improve the quality of life in Australian cities. Like other stationless services, Mobike allows users to locate and unlock nearby bikes through an app.

For first-time users, a single trip will cost $2.50 for 30 minutes. After that, pricing will vary based on the amount of time you use the bikes, and in the future will be based on your Mobike score. Everyone starts with a score of 550, which will change based on user behaviour.

Observing traffic rules, parking in Mobike Preferred Locations (MPL) regular use will increase your score, whereas unsafe riding, vandalism and parking in off-limits locations will lower your score. If your score drops below 100 your account will be suspended.

Along with a few other bike sharing services, Mobike has attempted to reduce the risk of poor user behaviour and bike litter through geofencing, where virtual perimeters are set up around preferred areas. Using GPS on its bikes and the Mobike app, the company will message users when they exit a geofenced area. Users are rewarded or penalised based on whether on not they park in these geofenced MPL.

To help make it even easier for you to locate bikes, users are encouraged to upload photos of where they park the bikes. If the next user finds this information helpful, they can indicate so on the app and you can receive extra credits. While helmets are not provided, bike features do include lightweight frames, safety bells, puncture-resistant tyres and anti-rust frames.

According to the Climate Council, Australia ranks among the worst in the world for transport energy efficiency, but bike sharing services are helping to change that. In fact, ofo claims the carbon emissions reduction from its worldwide users in just the first few months of 2017 alone was comparable to the absorption rate of an ACT-sized forest.

If you want to know more about bike sharing services near you, check out our comprehensive guide to bike sharing.