Quick verdict: Belkin’s fancy and stylish charger can keep a lot of your Apple gadgets juiced up easily. However, it isn’t worth considering if you don’t have a MagSafe-capable iPhone and MagSafe-compliant phone case. 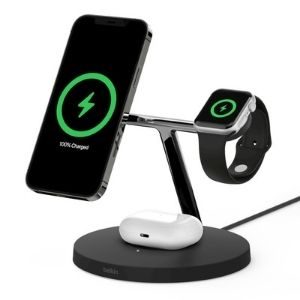 All the way back in 2017, when Apple was first getting on the Qi wireless charging bandwagon, the company announced a bold new wireless charger of a type nobody had really attempted before. Apple's AirPower could charge up to three devices simultaneously: two Qi devices and an Apple Watch on a simple flat pad.

If you're wondering why you don't already own an AirPower charger, it's because while Apple announced its existence back in 2017, it never actually came to market. Apple won't talk about why, leaving most to suspect that it couldn't work out a way to make it work as seamlessly and safely as other Qi devices.

Why am I talking about non-existent Apple products? That would be because the Belkin Boost Charge Pro 3-in-1 Wireless Charger with MagSafe fulfils the essential mission of the AirPower charger, albeit in a vertical way and with the inclusion of the mostly-nifty MagSafe feature of the iPhone 12 family along for the ride. 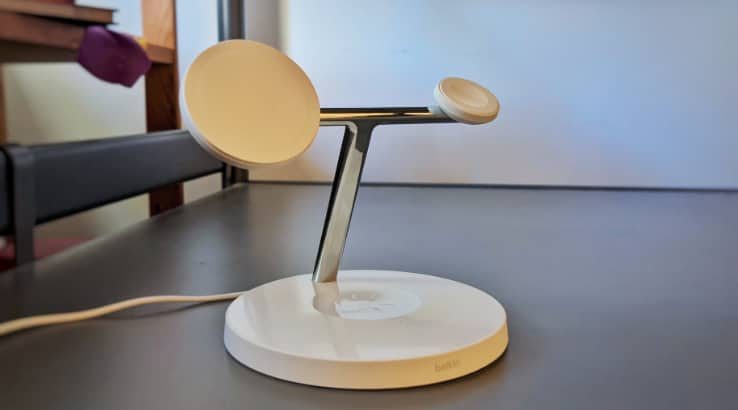 The Belkin Boost Charge Pro 3-in-1 Wireless Charger with MagSafe is a very striking device when it's not charging anything. The base could be just about any Qi charging plate you'd care to name – and it is indeed by itself a Qi charger – with an angular metal arm that juts up at a roughly 45-degree angle ending in two magnetically attaching circular charging plates.

On the left, you'll find a larger magnetic loop specifically for the iPhone 12 family, while on the right there's a smaller disc charger for Apple Watch devices.

The core idea here is that it's not just intended to act as a charging stand out of the way. It's a charging stand that shows off your shiny new Apple devices along the way in a style that might make some folks wonder if they'd just walked into an Apple store. 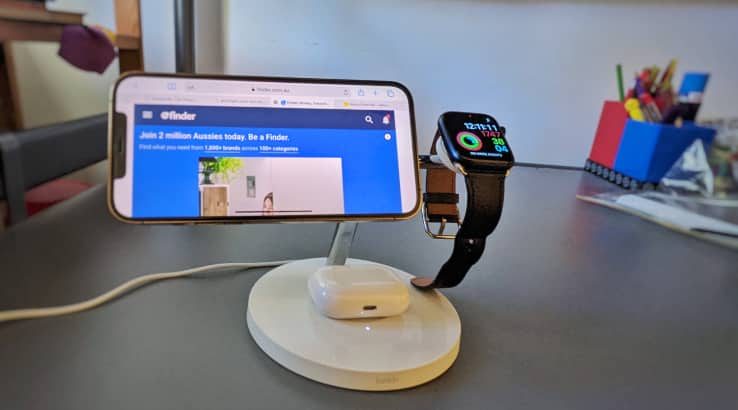 The Belkin Boost Charge Pro 3-in-1 Wireless Charger with MagSafe charges Apple devices at their current maximum charging rate, which tops out at 15W. That's a fair bit slower than some competing Android devices, but Belkin is simply following Apple's guidelines for MagSafe – and no doubt, its licensing requirements as well.

There's really not that much to say about the charge rate of the Belkin Boost Charge Pro 3-in-1 Wireless Charger with MagSafe, because it works as quickly as any other 15W charger. It'll always be slower than direct, higher power charging over a cable, but you're buying this stand for its convenience and style rather than massively speedy charging. For most folks, that's likely to be as an overnight stand, which is well and truly enough to fully top up an iPhone 12, Apple Watch and pair of AirPods Pro.

The one caveat here lies around your case choice for your iPhone 12. Given the price of the iPhone 12 family, you absolutely should put a case on your pricey new handset. However, if the case itself isn't also MagSafe certified, you'll find that the magnetic attachment of the stand is nowhere near strong enough to keep the iPhone held up. You can either hold it up to the plate, which works for power but rapidly becomes boring, or take your case off, which is what I did during my review period.

The bottom plate charger is designed for AirPods with Qi wireless charging – that's the newer AirPods and the AirPods Pro – but because it's just a Qi plate, you can charge anything that's Qi compliant with it that way. During my review period, I've used it to top up more than a few Android phones, and the iPhone 12 above it never complained. Then again, it had vertical superiority, so maybe it was happy enough with that state of affairs.

Should you buy the Belkin Boost Charge Pro 3-in-1?

The Belkin Boost Charge Pro 3-in-1 Wireless Charger with MagSafe is a very specific charging product that really only fits the most dedicated and up to date Apple users. There's no point buying a vertically oriented MagSafe charger without a MagSafe phone, which means you've got to have an iPhone 12 to hand. Moreover, you've got to have a MagSafe-compliant case or naked phone to use it. Equally, it wouldn't make sense unless you had an Apple Watch – Belkin says a series 5 or newer will work – to go with it.

At its asking price of $219.95, it's also priced very much as a fashion statement. If all you want is simple Qi charging you can manage that for way less money.

The Belkin Boost Charge Pro 3-in-1 Wireless Charger with MagSafe retails in Australia for $219.95 outright.