BayernLB: Bitcoin’s next halving will make or break the BTC stock-to-flow value theory

State-owned German bank BayernLB has tackled Bitcoin in a new report, assessing its value in line with a stock-to-flow theory.

So with a high stock-to-flow ratio (large existing supply, small amount entering the market), the price of an asset becomes hardened against factors that may impact its value, such as shifting supply and demand.

As the theory goes, when you're dealing with assets like gold and Bitcoin, whose main function is to be a store of value rather than a useful commodity, you can assess their fair worth as a store of value by looking at the stock-to-flow model.

According to this model, the fair price for Bitcoin for its current stock-to-flow ratio is about $7,500. Convincingly, BTC is changing hands at about $8,200 at the time of writing.

Even more convincingly, Bitcoin prices have tracked the stock-to-flow model throughout its history, and all its volatility looks perfectly reasonable when charted out with stock to flow.

The vertical axis shows the market cap, while the horizontal axis is the stock-to-flow ratio. 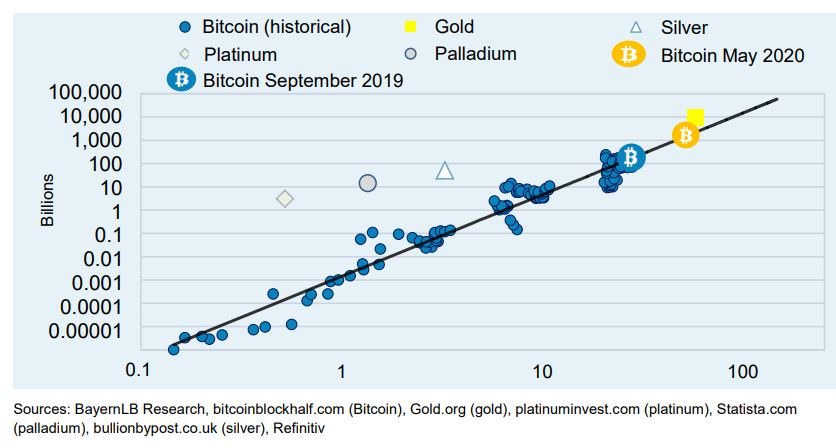 However, it's worth noting that you can get a quite different stock-to-flow figure for each asset based on how you measure it. In this case, BayernLB quite reasonably assumes that 1 million BTC have been lost forever, detracting from the existing stock. And in the case of the metals, its flow only counts the amount that is actually extracted from the ground each year, without diving into factors like metal recycling.

Also, before swearing undying fealty to the stock-to-flow model, it's worth remembering that of course it looks good in a chart. These kinds of theories are only considered worthwhile when they back-test well against historical Bitcoin prices.

For example, you'll find similar correlations between Bitcoin hashrates and prices, and there are plenty of theories around how Bitcoin prices and hashrate may correlate.

And here's another great model, which used a variation of Metcalfe's law to track active Bitcoin user numbers against the market cap, and which also looks good in a chart: 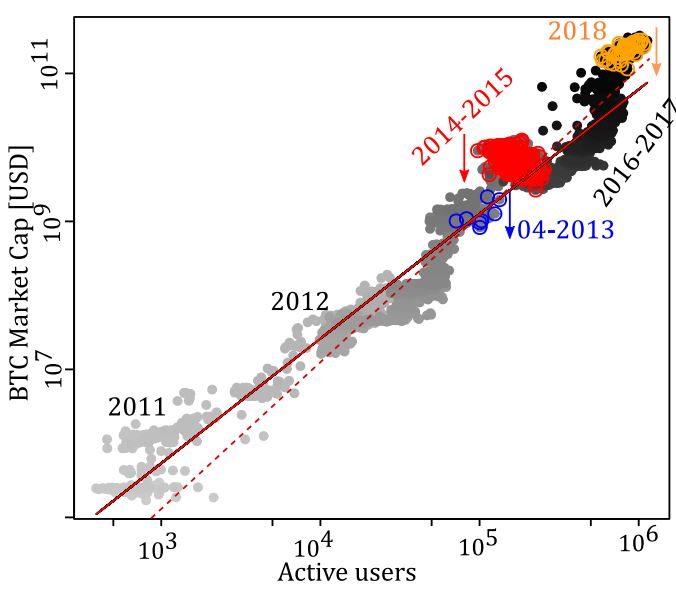 That said, the stock-to-flow theory remains one of the most convincing models of Bitcoin's value to date. In particular, this model seems to demonstrably work for precious metal prices, gold in particular, so the fact that it apparently applies to Bitcoin as well is especially compelling.

Unfortunately, the model has one big problem, as BayernLB and commonsense notes.

The problem with the stock-to-flow theory in Bitcoin

The main problem with the stock-to-flow theory in Bitcoin is that commonsense says it can't be right. It feels like it puts Bitcoin prices unrealistically high, and when you follow it a few decades down the line, it gives Bitcoin a market cap larger than the entire global economy. So even if it's working now, it has to stop working at some point.

This is why the next halving – where Bitcoin's flow is cut in half – will be so crucial.

After the next halving, due to occur in May 2020, this theory says Bitcoin will be worth about $55,000 based on how the stock-to-flow model has historically worked for Bitcoin, without any massaging of the numbers. BayernLB, by estimating 1 million BTC permanently lost or otherwise removed from circulation in its own model, predicts a Bitcoin price of about $90,000 after the next halving.

It sounds a bit far-fetched, and it's fair to regard these numbers with some incredulity. That's why the next halving will be a make or break test for this theory and for Bitcoin in general. If BTC prices settle in north of $50,000 following the halving next May, it will be a big stamp of approval for this theory.

And if that happens, the world can then start looking forward to the next halving in 2024 for things to get really weird. Because that will be when Bitcoin's monetary "hardness" exceeds anything else in existence, and it transitions from digital gold into digital adamantium.

"Undoubtedly the biggest acid test for the stock-to-flow model will be next year’s halving. In the meantime, the stock-to-flow approach will serve, at any rate, as a good heuristic for understanding Bitcoin. It becomes clear that Bitcoin has been conceived as an ultra-hard type of money," BayernLB writes.

"In 2024 (when the next halving is due to take place), its degree of hardness will inexorably increase even further, to a level unprecedented in human history (a stock-to-flow ratio of more than 100!). Nobody really knows what repercussions such a monetary standard would have. Only one thing is clear: if Bitcoin is indeed to become the money of the 21st century, it will be because its properties (above all its high degree of hardness) have been preferred to those of alternative types of money – after all Bitcoin is a completely open monetary system operating on a purely voluntary basis."