Banks are having their iPhone moment 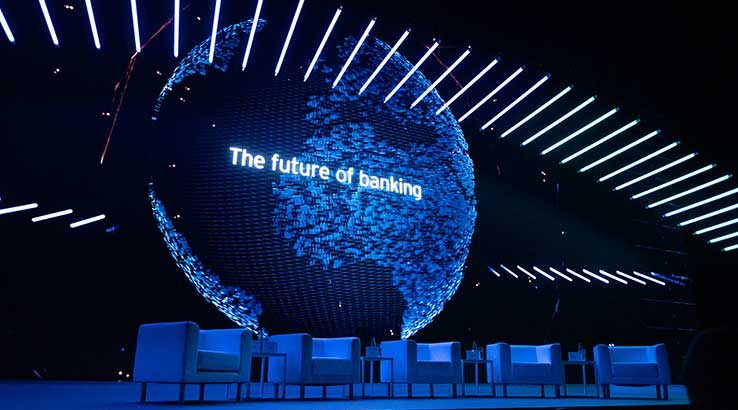 The open banking wave is bringing platforms to the shore.

The iPhone debuted to the world in June 2007, and it didn't take long for it to change how we interacted with phones as well as technology in general. It also transformed the entire smartphone industry, with iPhone customer share in the US growing from 4% in 2007 to 30% in 2008. iPhone's main competitors the Palm and Blackberry saw their numbers stagnate or decline during that same period.

So what happened? According to Markos Zachariadas, associate professor of information systems at Warwick Business School, it wasn't necessarily because the iPhone was a better product, but because of the type of product it was.

"It was geared towards the platform business model," Zachariadas said at the Sibos 2019 event in London this week.

Describing it as an "innovation platform" approach, Zachariadas explained that Apple's success lay in reaching out to organisations and developers to put their own ideas into the iPhone.

Zachariadas and professor of strategic management at Warwick Business School, and fellow researcher, Pinar Ozcan, have been studying banks and fintechs in the world post-open banking. What they've found is platforms, not unlike the iPhone, are emerging.

They define platform to be like a broker in that it connects people that want to consume something to companies or organisations that produce that thing.

In the world of open banking, platforms will abound.

Open banking and the rise of platforms in Australia

This week, the Australian Consumer and Competition Commission (ACCC) announced 10 companies that have been accepted to test during the first stage of the Consumer Data Right, open banking. These companies, which include digital banks, fintechs, banks and software platforms, will participate in testing of the Consumer Data Right ecosystem. If successful with testing, the companies will participate when the first set of banking data is made public in February 2020.

Digital bank 86 400 is one of the companies that will be participating. The neobank only recently launched its transaction and savings accounts product, all accessible through a smartphone app, and is leaning into the "platform" strategy.

The app allows you to see your 86 400 Pay and Save account as well as all of your other bank accounts, credit cards and loans. Through account aggregation software Yodlee, customers can nominate to securely link their accounts and have them brought into the 86 400 app. These then continue to be updated in the app. Users can bring in an unlimited number of accounts and can nominate to remove them within the app.

Speaking to Finder at the time of the app launch, CEO Robert Bell said they architected the app ready for open banking, of which they are big supporters.

"Our view on data is really different to the Big Four banks," he said. "We have a fundamental view that your data is your data, you own the data, and you should expect that if you give your data to anyone, then they should generate some benefit to you."

Another company on the ACCC's list to test open banking is Moneytree, a financial data aggregation platform. The app allows users to see all their financial data, including loyalty points, in one place. It then gives you insights to help you make better decisions. There is also a paid budgeting feature that lets you budget by category, export your data and get a monthly snapshot across all of your accounts.

Moneytree has been a supporter of open banking since launching in Australia in 2017. However, CEO Paul Chapman said the most important element of a data-sharing environment, and one that helped Moneytree gain "millions of users" in Japan, was trust.

"When we started Moneytree, we decided to be absolutely transparent and radically upfront with people. This approach has earned us the trust of millions of users, and has given some of Japan's biggest financial institutions the confidence to partner with us," Chapman said at the launch event in Sydney in 2017.

"People are more likely to share if they feel they have control and there is transparency around how the data is used and who will get it."

"Data exchange will have less friction and customers will become more empowered to manage their data, determining who to share it with, for how long and for which purposes," Sharrott said.

Moneytree doesn't only operate on one side of the open banking coin. It also offers a financial data aggregation and portability platform for financial institutions called Moneytree Link. It currently counts over 50 enterprise partners in Japan and 2 in Australia, Salesforce and Roll-It-Super.

The next big banking platform

Deputy CEO and co-founder of 11:FS Jason Bates spoke about one of the most successful platforms to date: Uber. Bates explained how Uber uses geolocation APIs, Google Maps APIs, TomTom APIs and Braintree APIs to connect customers and drivers and create payments.

"Uber gives me a chauffeur in the 21st century, using APIs to connect all of these services together into something that creates that seamless experience," Bates said at Sibos this week in London.

The next big platform in financial services could be created by any number of players: big banks, smaller banks, neobanks, fintechs or big tech companies.

For the big banks, siloed data, regulatory unevenness and internal cultural challenges can make developing a platform difficult. And then Ozcan says even if a platform is developed by a bank, there is a hesitation as to sharing the branding, with study participants likening platforms to a NASCAR.

"An actual quote from one of our informants [was] 'I won't allow my product to look like a NASCAR. This is my product. And all of those fintechs, they can provide services, but I don't want their logos on there.'"

Because of this, Ozcan says big tech companies such as Amazon and Google have an "open playing field" to provide platforms in financial services because they have trusted brands.

And they have been slowly dipping their toes into financial services. Apple has released its much-hyped Apple Credit Card while PayPal's Working Capital Loan hit $500 million in funding to Australian businesses.

According to one Warwick Business Study participant, big tech companies launching into financial services is like a game of musical chairs. There are a lot of players circling, some already have a chair and others are running around trying to grab one before all of the chairs are gone.

There are a number of companies trialling platforms and apps with open banking capabilities, but Ozcan says platforms are still very much "under construction".

According to Bates: "The good news is, everyone says open banking is amazing and it's going to transform the world. The bad news is, no one can tell you how."