Collaborating with fintech is the focus for banks 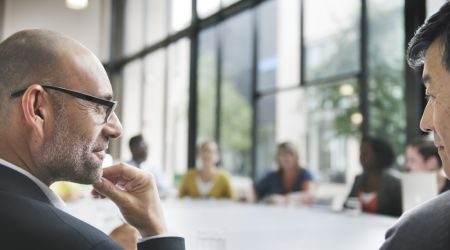 A worldwide banking survey by IDC reveals that the majority of banks prefer collaboration with fintechs rather than buying them.

The International Data Corporation (IDC) survey. which was sponsored by SAP, drew on over 500 respondents from 24 countries. The focus of the report was digital transformation, with the respondents' views revealing that collaboration was the goal of the majority of banks in multiple regions.

Australian banks, which were grouped in the Asia-Pacific region, saw a 32%/31% split between those wanting to collaborate and those wanting to acquire fintech competition. A further 18% viewed them as a threat while 19% had no position.

The region with the highest number of respondents preferring collaboration was Latin America, with 38% wanting to work with fintechs versus 24% wanting to acquire them.

For digital transformation, Australia's banks fare slightly better than the worldwide statistics show. Having banks in the higher stages indicates they are "truly able to support the level of agility and innovation that the market is demanding". The Asia-Pacific region has the highest percentage (10%) of our banks in the "optimised" stage, which is the highest stage for digital transformation maturity. Asia-Pacific banks also have the second highest percentage of banks in the second-highest tier, with 18% of our banks in the "managed" stage.

There are 12% of banks globally in the “ad hoc” stage and 31% are at the “opportunistic” stage, which are the lowest two stages. The region has 12% and 31% of banks in these categories respectively.

While only represented as part of Asia-Pacific, Australia did get a few specific mentions. Commonwealth Bank was used as a case study for its company-wide digital transformation, with the report mentioning the bank’s efforts in delivering a real-time, personalised service to its customers.

“In Australia, although banks are starting to accelerate their transformation they are still more likely to align their DX with near-term goals, having an established banking sector with a significant legacy and Western mindset.”

The numbers for Asia-Pacific and Australia as a whole reflect the increasing number of partnerships and collaborations that have emerged between banks and fintechs recently.

In terms of the Big Four, NAB has kept its innovations largely in-house but has also pledged $50 million to invest in startups. CommBank has partnered with several fintech companies, including payments platform Kounta and small business lender OnDeck. The latter saw the Big Four lender win Fintech-Bank Collaboration of the year at the Australian Fintech Awards this year.

ANZ has made strides in collaboration as well, offering Apple Pay to its customers as well as partnering with a Melbourne incubator York Butter Factory and co-working space Honcho. Westpac is arguably the leader when it comes to fintech collaboration. Through its fund Reinventure, its pledged $100 million to support and collaborate with promising fintech startups.

While the banking report shows positive progress for Australia, as do the partnerships being undertaken by Australia’s largest banks, we still have a way to go when it comes to taking full advantage of fintech innovations.