How much screen time did Baby Yoda have in The Mandalorian season 1?

We're happy to report that The Child is heavily featured during The Mandalorian's first season.

It's no secret that The Mandalorian is a huge hit for Disney Plus. The Star Wars live-action series dethroned Stranger Things earlier in 2020 as the most watched show on streaming in the US. There are plenty of reasons for its success, including stunning visuals, an engaging plot, solid acting and obvious appeal for Star Wars fans.

The cherry on top is The Child, Mando's alien co-star lovingly dubbed Baby Yoda. His initial appearance caused a stir both inside and outside the Star Wars community. The character took the Internet by storm, inspiring numerous memes and building an impressive fanbase based on cuteness alone.

Baby Yoda is also surprisingly powerful for an infant in a floating bassinet, so we can probably all agree that The Child must be protected at all costs. Which, thankfully, Mando realises as well.

Due to his incredible success, it's natural for Baby Yoda to appeal to non-Star Wars fans as well. But if you're thinking of streaming The Mandalorian only to watch The Child make cooing sounds, is it really worth it? Does he get enough screen time? Let's discuss.

Baby Yoda is brought to life thanks to an ingenious combination of animatronic puppeteering and computer-generated graphics. That can't be cheap, but it also makes the character come across as life-like and adorable. As a result, there's no wonder The Child enjoys the spotlight as often as possible.

While he only appears for a few seconds in The Mandalorian premiere, the character is featured in all seven episodes that follow in varying degrees, basically acting as the show's co-star along with Mando himself. If you don't mind light spoilers (if you do, avert your eyes!), we're also happy to report that you can see Baby Yoda performing a range of tasks.

The list includes but is not limited to sipping soup, messing with Mando's spaceship, eating a frog and taking a nap. Surely most impressively for an infant, you also see him bust out some seriously impressive powers. Based on Finder's rough calculations, he enjoys just over 46 minutes of screen time across The Mandalorian's first season.

That's quite a feat when you consider The Mandalorian episodes are shorter than your average sci-fi drama, running between 31 and 46 minutes. Yoda himself got about 43 minutes of screen time across Star Wars movies, while minor characters enjoyed even less – Jabba the Hutt, for instance, only graces the screen for a little under 7 minutes.

All in all, you'll get to see plenty of Baby Yoda if you decide to give The Mandalorian a stream. The show makes it a point to check in with The Child even when he and Mando are separated, so you won't get to miss it for long when other stuff takes centre stage.

The only problem? Once you're hooked, you'll want to tune in to season 2 as well to make sure precious Baby Yoda keeps living the good life. You're in luck – new The Mandalorian episodes premiere on 30 October. You'll need a Disney Plus subscription to watch, which costs $11.99 a month or $119.99 for an entire year.

Savings are calculated based on the annual price compared to the monthly subscription price.
Get deal

Appearances of The Child, season 1

If you managed to avoid spoilers or watched the series when it launched, viewers weren't quite sure what was in store when Mando took on his mission "to deliver the asset" in the first episode.

With the help of a bounty droid called IG-11, who he later exterminates, Mando makes it all the way to a small pod with supposed signs of life. When he opens the pod, there lies The Child, soon to become widely known as Baby Yoda.

They have a touching scene as the episode closes, both reaching their hands out towards each other. All up we have about 20 seconds of the infant and of course are left wanting much, much more. 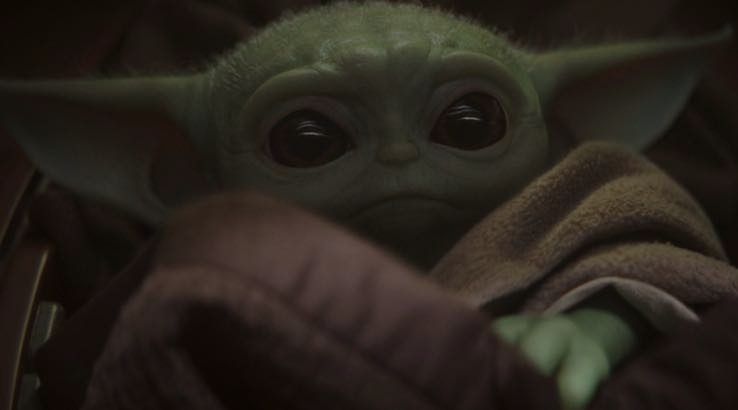 If you are keen to watch one episode with the most visuals of The Child, this is it. Baby Yoda features regularly throughout this episode and we also get a chance to see what he's capable of at his relatively young age. Early on he helps our hero heal after battle and later he shows just what he can do in the fight with a massive, very angry mudhorn. 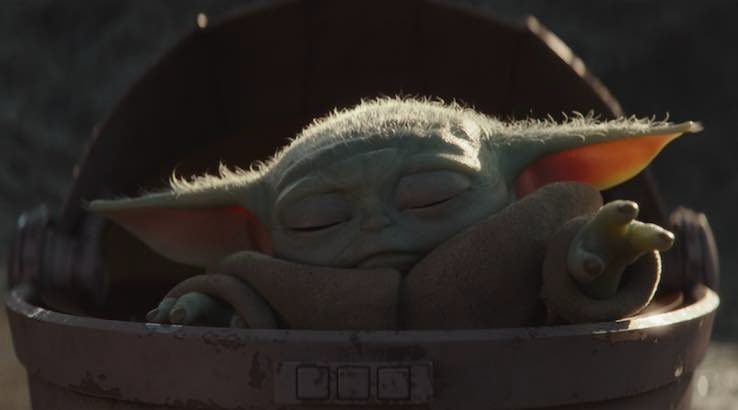 We really only get fleeting glimpses of The Child in this chapter. A number of shots are like the one below, which are common throughout The Mandalorian, showing the back of his head and over-sized ears. The most we see him in this episode is during the handover to the mysterious person who has been seeking Baby Yoda, known only as The Client. 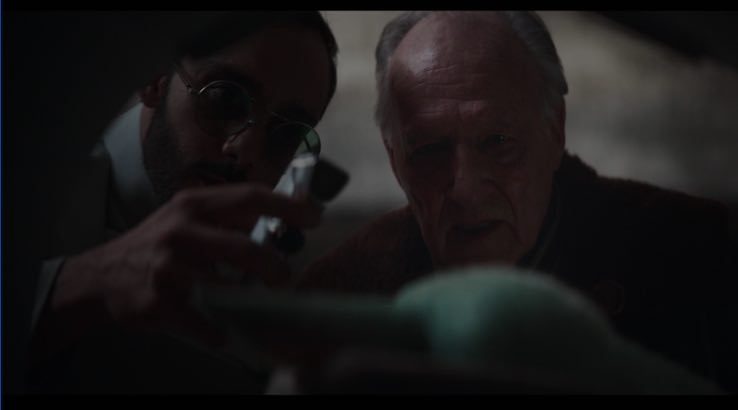 In this episode, Mando is aiming to find a place to lay low with The Child, landing on a lush, Earth-like planet called Sorgan. There are regular shots of the infant throughout this episode, messing with Mando's ship, walking around a bar and being played with by the village children, who quickly fall in love with the little guy.

There are long stints in this episode where we don't see Baby Yoda. He appears in three main scenes, including one late in the episode where a young bounty hunter, Toro Calican, plans to steal The Child. It does not go well. 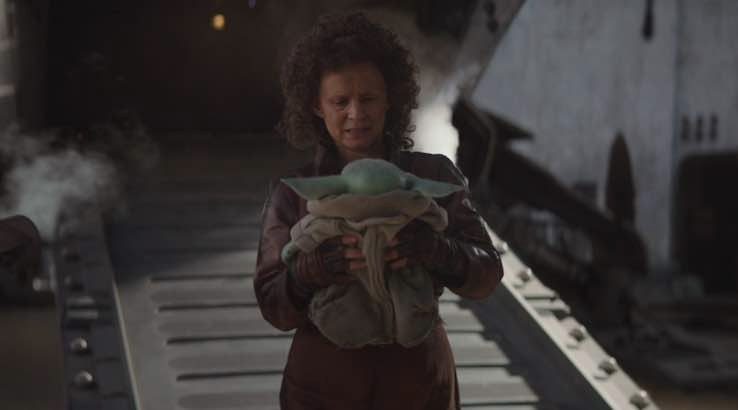 We did not put a watch to comedian Bill Burr's screen time in this episode, although he's well worth a look. We suspect we might see him again down the track.

In terms of our diminutive hero, he is barely seen in this chapter. His main role is when he is discovered by Burr and his crew about a third of the way through, with the comedian asking: "What is that, like a pet or something?" 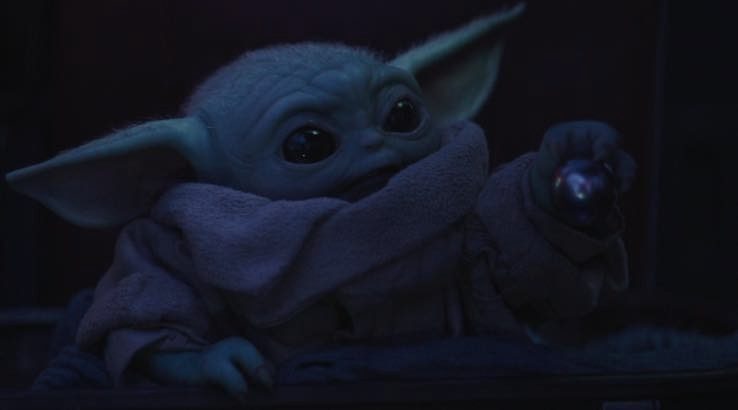 We see a lot more of the little one in this episode, although again they are usually brief glimpses here and there. He is animatronic after all, so any time we see him would be a painstaking exercise from the show's creators. The highlight is just before the 14-minute mark, when The Child does his best Darth Vader impression to intervene in an arm wrestle between Mando and his trusted ally, Cara Dune. It's the season finale and we see less of Baby Yoda here than in any previous chapter. It's really just very short shots of him from time to time, usually a few seconds apiece. That includes an awesome scene when IG-11 rescues The Child and enters a battle scene on a scout trooper's ride (following a Jason Sudeikis cameo) with the infant strapped to its chest. 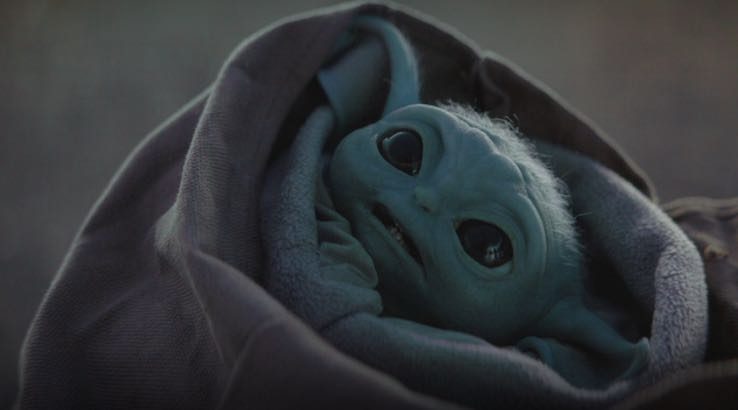 So that's it. Did we see more of The Child in season 2? You can be the judge, with The Mandalorian's second season premiering on 30 October 2020 in Australia. The only way to watch is via a Disney Plus subscription, for $11.99 a month or $119.99 for an annual pass.