How Australia’s fintech SME lenders have learnt from the US 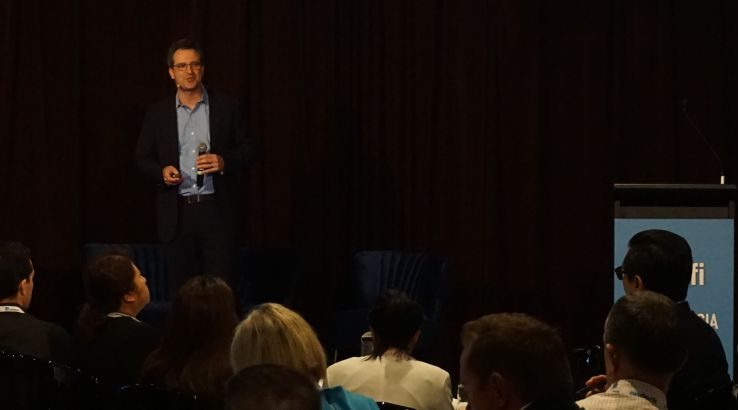 And how the sector has matured quicker because of it.

Most facts and figures can paint the picture of Australia's small business finance market and how quickly it has grown. However, it's difficult to truly appreciate its growth until you compare it to other markets.

Speaking at the AltFi Australasia Summit 2018, CEO of OnDeck US Noah Breslow discussed how it first launched in the US over a decade ago in 2007. And while it only launched its Australian lending business in 2015, the Australian small business lending market has traversed the same course as the US market in a markedly shorter time.

"We’ve been working on this in the US now for quite some time, over ten years. And we’ve found there is a certain market cycle that you go through. What’s exciting about Australia is that you’re going through that cycle even faster and more aggressively than we did in the US."

When OnDeck wrote its first business loan in 2007, Breslow said it was in a market stage of "low awareness". It moved through a stage of scepticism and then onto the stampede phase which saw "tons of capital, investment, new players and an explosion of innovation". This has culminated in the US market's current phase, the "shakeout", where stronger players survive and weaker ones die off. 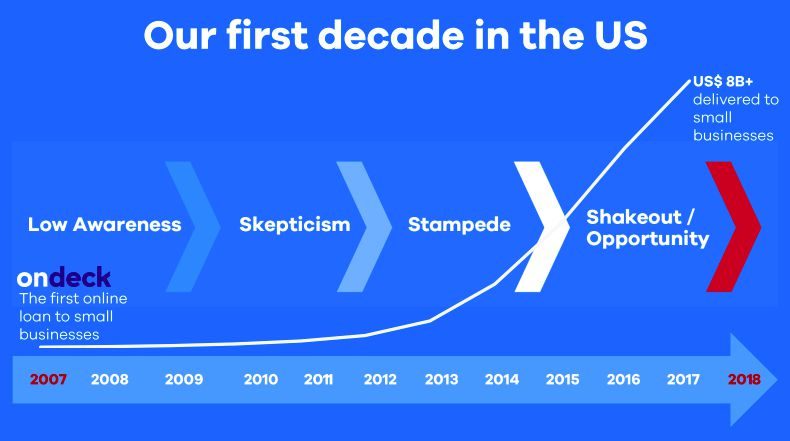 While this market cycle took 12 years in the US, Breslow says it will occur in about five or six years in Australia. According to his estimations, Australia's market could reach over $2 billion in annual originations by 2020.

"In a good way, I think Australia is learning from some of the experiences in markets around the world and is evolving faster."

Coming into our own

There have been initiatives developed in both the US and Australia to progress the market and the products. This has been both on the behalf of the government and the lenders themselves. While the actual alternative small business lending market remains largely unregulated, other initiatives put in place, such as the pursuit of open banking and comprehensive credit reporting (CCR), will have a marked impact on the sector.

Speaking about the support the Australian Government has shown to fintechs and small business lenders in general, Breslow said it has been "very proactive".

"And we have not seen the same initiative on the US Government’s part," he said. "The only thing is that they have to get these things implemented, that’s my only caveat. Just talking about CCR, you have to get it rolled out (...) the hard work is on the other side of rolling out the bill, but at least they’re starting the process here which is great."

One initiative Breslow praised was the recent commitment made by SME lending players to develop a code of conduct.

We are always looking to America to see how things progress.

"As an industry, the balance sheet lenders, we’ve got a commitment by June 30 to have a code of conduct done," explained CEO of OnDeck Australia Cameron Poolman. "The really important one is the pricing transparency so the customer knows what they’re getting into and they can also compare loan to loan."

A similar initiative involving 12 lenders, the Innovative Lending Platform Association, has also been developed in the US.

Still a way to go

And while this similar trajectory has been faster in the alternative small business loans market than in the US, there is still a way to go.

In the US, 70% of SMEs perceived there to be more small business lending options than five years ago, but that number is only 30% in Australia.

According to Poolman, unmet demand is a major contributing factor to the opportunity in Australia.

"Unmet demand is a big thing. When I speak to customers that have given up talking to the banks, that didn’t happen last year, that happened seven years ago. We’re not really a competitor to a bank, we’re just an extra option for the customer."