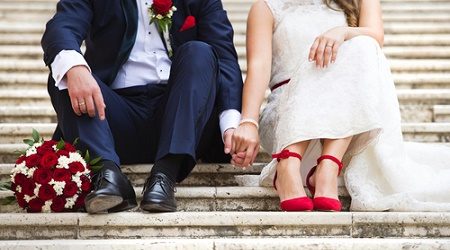 The Australian Bureau of Statistics' (ABS) Marriages and Divorces, Australia, 2015 reveals, over the last 20 years, the age at which Aussies first get married has risen by about three years.

On average, men enter their first marriage at 30.1 years of age, while women get hitched at 28.5 years.

For those couples whose commitment didn't last and who filed for divorce, the average length of marriage was 12.1 years in 2015, up from 11 years in 1995.

Not only are Australians marrying for longer, they're also living longer than ever before.

Of these, almost three quarters (71.9%) were between a man and a woman who had never been married. Almost one fifth (16.3%) were first marriages for one partner, while a smaller proportion (11.7%) were remarriages for both participants.

Australian couples are also taking advantage of alternative approaches to formally registering their relationships. There has been a clear shift away from church-led services, with the number of marriages performed by religious celebrants halved since 1995.

In 2015, almost three quarters (74.9%) of all marriages were performed by civil celebrants. Civil marriages have outnumbered religious ceremonies since 1999.

Those whose marriages were religious were predominantly wed by ministers delivering Catholic rites (31.3%) and Anglican rites (14.2%).

Couples who lived together before marriage were more likely to cement their relationship in a civil ceremony (81%) than those who lived apart (46.6%).

While same sex marriage is still not permitted in Australia, legalising nuptials for gay and lesbian couples could be a productive way to bolster the Australian economy.

The most important day of your life is often the most expensive. If you don’t have that money saved, you may be looking at other ways to finance your wedding.