What happens to the Australian economy if Trump wins? 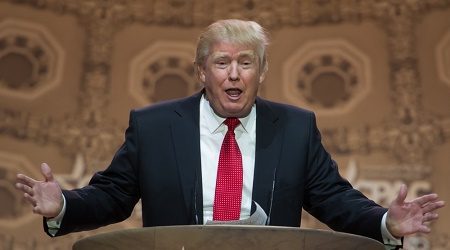 From market volatility to regional security, experts assess the potential impact of The Donald.

But we shouldn't jump to any conclusions yet.

Earlier this week, former Speaker of the House of Representatives Newt Gingrich told New York radio's AM 970, "just as with the Brexit vote in Great Britain, [Trump] is in fact very likely to end up in a position where there's three or four percentage points that won't say his name [to pollsters]."

So, what would happen to the Australian economy if the self-styled archetypal businessman was seated in the executive chair inside the oval office of the White House?

During his first official speech as Reserve Bank of Australia (RBA) governor, Philip Lowe said the impact of a Trump election on financial markets "wouldn't be as benign an event" as Brexit, and while the RBA "doesn't have a Trump plan" it maintains a "generic response plan to a whole range of shocks".

In a post on National Australia Bank's (NAB) Investments Insights blog, Dr Susan Gosling, head of investments at MLC, said it was "surprising that financial markets have not shown more nervousness about the possibility of Donald Trump becoming US president".

Gosling said if Trump was elected, one of the greatest areas of concerns would be the United States' interaction with the rest of the world.

"Particularly worrying are suggestions that the US may reduce its role in tackling global problems - and may not provide guaranteed support for NATO countries under attack," she said.

"Our base expectation is that a Trump victory would be destabilising for financial markets."

Earlier this month, World First Australia's managing director Andre Porter told the AFR that amidst the looming US election, markets would be taking positions on the US dollar and most economists were factoring in two or three rate hikes by the Fed before the end of 2017.

"The markets will seek to anticipate any movement and we'll see some volatility."

In 2011, under the auspices of president Barack Obama and spearheaded by then-secretary of state Hillary Clinton, the US began expanding its already significant role in the Asia-Pacific region.

In an interview with ABC's Insiders program, foreign affairs minister Julie Bishop said US engagement in Asia-Pacific was important for Australia but warned Trump would likely focus on domestic matters.

Bishop said that while Australia will work closely with whomever is President, Democratic leader Hillary Clinton was the principal architect of the United States' re-balance to the Asia-Pacific five years ago.

"I believe there will be continuity in foreign policy from the Obama Administration should it be a Clinton administration," Bishop said.

"She sees the US as having a global leadership role. Candidate Donald Trump does not."

During his campaign, the Republican candidate questioned America's role as global protectors, stating "we are going to have to stop being the policemen of the world".

In an interview with the New York Times in March, Trump said the US cannot afford to be losing billions of dollars maintaining military forces in countries like Japan and South Korea.

"The countries we defend must pay for the cost of this defence. If not, the US must be prepared to let these countries defend themselves. We have no choice."

During a visit to New York earlier this year, Australia's ambassador to the US, Joe Hockey, sought to confirm Trump's position on the relationship between Australia and the US when he met with one of the candidate's most trusted campaign advisers, former New York mayor Rudy Giuliani.

Given the unprecedented drama of the upcoming US election, global market instability and a spate of contradictory remarks and reports from both camps, it remains unclear just how great an impact a Trump presidency would have on Australia's political, economic and security landscape.

We'll just have to wait until 8 November to find out.