Even by the most generous interpretations, the Currency Bill 2019 is a factually bad bill.

The proposed Australian cash payment limit, which would limit cash payments to a $10,000 maximum in an effort to crackdown on the "black economy", may be extended to cryptocurrency.

The first version of the bill specifically excluded cryptocurrencies from this limit, but now shadow assistant treasurer Stephen Jones has said the law should be extended to cryptocurrencies, suggesting a level of bi-partisan support for the Currency Bill 2019.

"If the motivation is genuinely looking at addressing fraud, tax avoidance, terrorism and criminal activities then we should look at all of the currencies that are likely to be subject of that," he said.

This ignores the opinions of the Black Economy Taskforce, whose recommendations explicitly said "there is little current evidence that digital currency is presently being used in Australia to facilitate black economy activities".

But even when it's not simply being ignored, a closer look at the evidence presented by the taskforce is raising concerns that the whole argument behind the cash limit bill is built on factually dubious ground.

The reason given for this bill is to crack down on the black economy, wresting billions of dollars back into the light in the process. The argument for doing so is based on the numbers provided by the taskforce report, which say as much as 3% of Australia's GDP – some $50 billion – could be getting lost to the black economy.

But these numbers don't stand up to any serious scrutiny, as CFA Alex Martell points out in a submission to the treasury department.

Firstly, the taskforce itself plainly says the 3% figure is just a guess. "We acknowledge that this conclusion is a qualitative one" it says. The figures "should be taken as indicative only".

There's no actual evidence saying the size of Australia's black economy is actually $50 billion. But even if you do decide to roll with that conclusion, you get the following chart, presented by the taskforce. 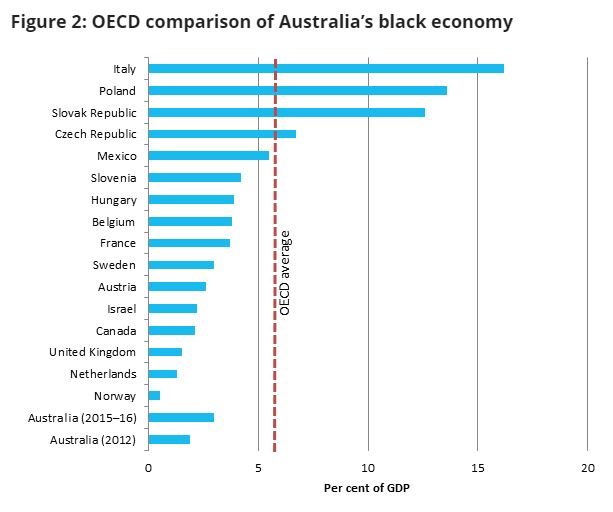 To be clear, the above chart is the foundation of all the arguments in favour of this cash limit bill. This is the chart which is meant to sell the entire idea that Australia has a serious black economy problem.

The first problem, as you can see, is that even if you take everything at face value and accept all the guesses presented by the taskforce, Australia is still coming out considerably cleaner than its OECD peers. A black economy of less than half the OECD average, as a percentage of GDP, is hardly an "urgent, pervasive and damaging problem" to quote the taskforce.

The second problem is that if you actually look at the data, this chart is actually just hot garbage. Or, it should be "interpreted with significant caution" as the report says.

The taskforce breaks down these cash and criminal components as below, while accompanying the chart with the head-scratcher that "the figures presented are not additive". 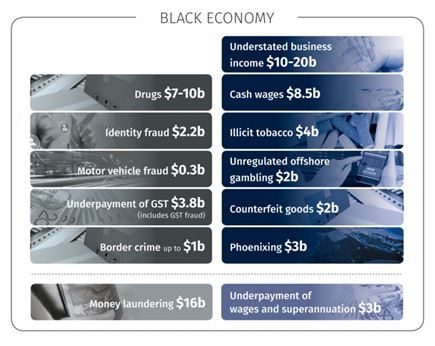 It's not clear how a cash limit bill would help crackdown on most of those issues. Especially because, as AUSTRAC says, banks are a major money laundering channel.

"How would a blanket ban even work to reduce the size of this market? Again, here the Taskforce is silent," Martell says.

The just plain bad evidence behind the bill may be one of the reasons it's attracted such controversy and has sparked suggestions that it's a Trojan horse for corporate motives.

"Despite the qualifications made by the Taskforce, it is plain to see upon inspection that this $50 billion figure cannot be taken as anything more than an opinion, handed down by the very people who are promoting the adoption of the Currency Bill 2019," Martell said.

"It is plain to see, for anyone who reads the text of the Currency Bill 2019, that the bill not only bans the use of cash for large transactions, but also bans the use of any other non-banking form of payment that exists today, that is being developed today, or that might be developed at some point in the future."

"That is to say, in the job of facilitating the economic activity of Australian citizens and businesses, locally and globally, the Government with this bill seeks to grant banks a lifetime monopoly."

Much, much more harm than good

When you try to calculate the potential benefits of the bill next to the costs of unintentionally cementing a bank monopoly on transactions, you get a very lopsided picture, Martell says.

The "closest thing" to calculable benefits is a speech where it was said that implementing the recommendations of the black economy taskforce "could bring in $5.3 billion over the next four years" he points out.

"If we take a yearly average, this equates to about $1.325 billion per year", only a fraction of which could theoretically be attributable to the cash limit bill.

By contrast, Australians use credit cards to purchase $1 billion of goods and services per day, and "for each dollar transacted via credit card, Australians pay about 0.87 cents in merchant fees to financial institutions, assuming the cheapest form of payment is used," Martell says. "This means, per day, Australians are paying about $8.7 million in credit card transaction fees alone, or about $3.2 billion per year."

"Given Australians spend $3.2 billion annually on credit card fees alone, it's not boding well for any argument that we should be granting banks monopoly protection for this revenue stream. Competing financial systems, which the Currency Bill 2019 would have us outlaw by default, could easily drive this $3.2 billion cost to the Australian economy."

"And all for the sake of a $1.3 billion annual increase in the Government's tax take? Or even to try and swat at a non-existent black economy problem?"

"But that $3.2 billion credit card fee cost per year isn’t even scratching the surface of the scale of value that flows through the current financial system."

"Foreign remittances, derivatives, securities, loans, structured financial products – even these are just the tip of a gargantuan iceberg. Now, it is one of the ambitions of cryptocurrencies, perhaps one of the most promising emerging competitive threats to financial institutions, to do to these costs and revenue streams what the internet did to long distance telephone charges, in other words, to drive them to near zero."