Aussie golfers most like to holiday in Queensland, while everyone else prefers Victoria 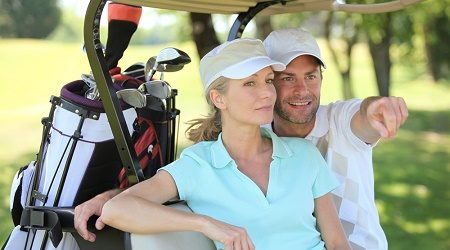 They travel where the golf is good, obviously.

Almost two million Australians play golf and with the world’s third-highest number of golf courses per capita, it's no wonder these generally affluent individuals are more likely to holiday than the average Australian.

According to Roy Morgan Research's latest stats, Australian golfers love a trip away, with almost half of them (49.6%) naming Queensland as the state they’d most like to visit on holiday in the next two years, compared with the population average of 40.6%.

Victoria (49.2%) and New South Wales (47.9%) also rated highly on golfers' dream destination lists but South Australia struggled to garner must interest from players, coming in below the national average at just 14.9%.

"More than half of Aussies (51.4%) who play golf either regularly or occasionally belong to the affluent AB or C socio-economic quintiles of the population, which may go some way towards explaining why 65% of Australian golfers took at least one domestic holiday in the last year, compared with the 53% national average," he says.

Breaking down the state-to-state data more precisely, it's clear that golfers prefer to visit places with good golf courses (or golf resorts).

Noosa was the most popular destination, with golfers 59% more likely than the average Aussie to name the beach town as a likely holiday spot. Surfers Paradise (41% more likely) and Cairns/Atherton Tableland (24% more likely) were also favourable given their scenic surrounds and course vistas.

Melbourne has four of Australia’s ten best golf courses, according to Golf Digest, as well as several others from the Top 100 scattered around the state's coastal regions. Golfers were 44% more likely than the average Australian to prefer a trip to the Mornington Peninsula, Portsea and the Flinders region.

Golfers can't stay away from NSW as it boasts Bonville Golf Resort in Coffs Harbour, acknowledged as the most beautiful course in the country and is also home to Australia's highest-altitude course in the Snowy Mountains village of Thredbo. Popular destinations include Forster, Port Macquarie, Taree, Port Stephens, Hunter Valley, Newcastle, Lake Macquarie and Gloucester.