Audio-Technica's latest set of wireless buds don't, on the surface, look all that much different from the wide range of more affordable Bluetooth wireless headphones saturating the market right now. We've seen plenty of affordable pairs with ordinary audio quality, and that's where the Audio-Technica ATH-CK3TW headphones stand out.

You can certainly get better audio quality from a set of higher-priced buds, but for the asking price, the Audio-Technica ATH-CK3TW headphones are a compelling prospect. 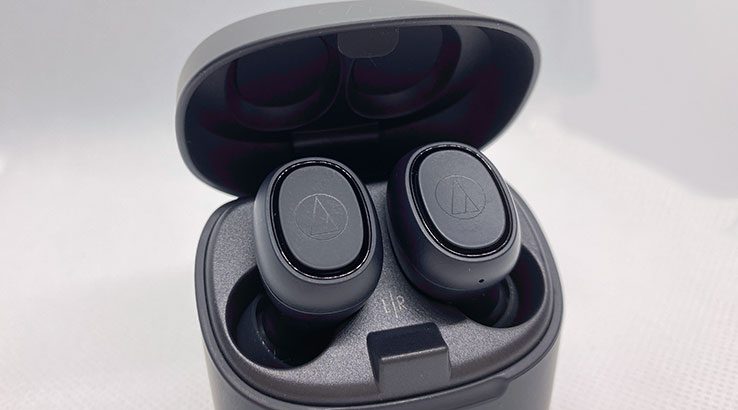 While the set of Audio-Technica ATH-CK3TW headphones sent to me for review was the black style, making them appear relatively plain, Audio-Technica actually produces the ATH-CK3TW model in a range of colours, including white, blue and red. There's a little something here for everyone, essentially.

That's about all that can be written about the Audio-Technica ATH-CK3TW headphones that isn't immediately apparent from looking at them because they're otherwise a very standard bud design. They use silicon tips with a range of sizes included in the box, although I found the standard tips to work well enough for my ears without needing to swap them out at all. 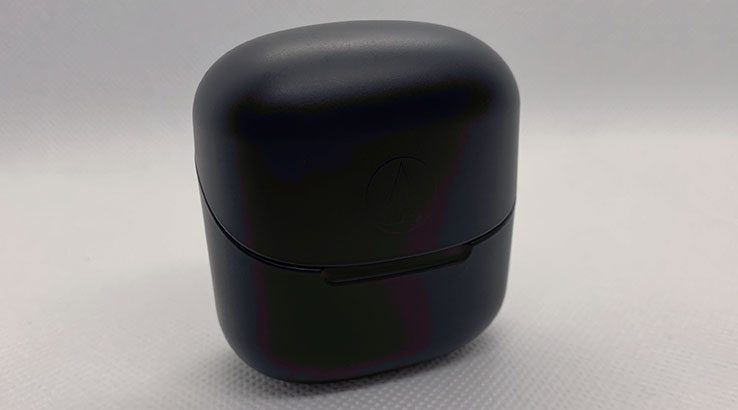 Even the charging case for the Audio-Technica ATH-CK3TW headphones is fairly generic, with magnetic clips in place to drop each bud onto its charging plate. The case is reasonably sized to slip into a pocket, although it is somewhat heavy, as I found when dropping it into a shirt pocket one day. A sagging top pocket is rarely a stylish look, although there's good enough reason for why the Audio-Technica ATH-CK3TW battery case has its mass. 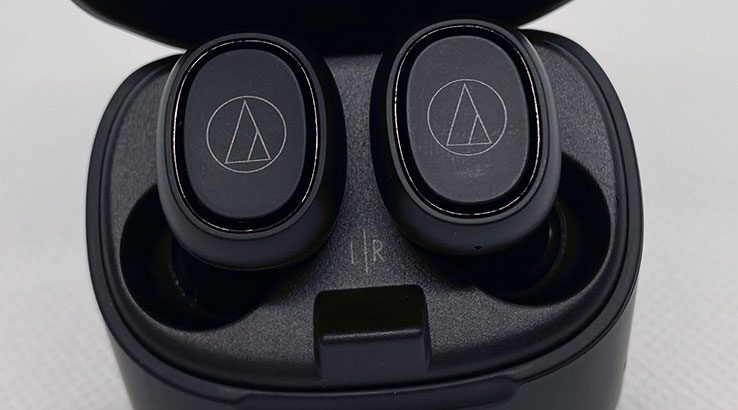 Setting up the Audio-Technica ATH-CK3TW headphones is as simple as it is with most headphones of this type; take them out of their charging case and they'll start looking for suitable pairing partners. Search for them on your device of choice – in this day and age, almost always a smartphone – choose them and you're away. Nothing out of the ordinary here, and I encountered few issues with getting them to pair simply and quickly each time I wanted to use them.

If you've got a device that supports Qualcomm's TrueWireless Stereo Plus, it's supported by the Audio-Technica ATH-CK3TW headphones. That's still a relatively small list of phones to date, and to be clear, I rather deliberately tested with a phone that didn't support this to see how the Audio-Technica ATH-CK3TW headphones would stand up. Still, in theory, you should see even better pairing and battery life from a device with TrueWireless Stereo Plus on board. 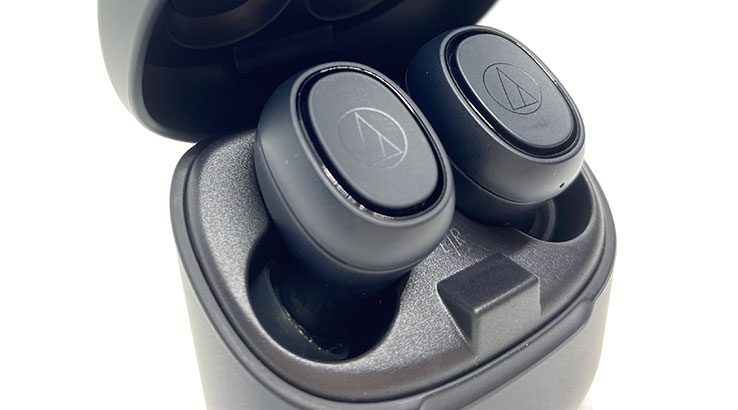 The simple physical design of the Audio-Technica ATH-CK3TW headphones means that you're not looking at fancy features like active noise cancellation; the best you can hope for is simple noise isolation as the silicon tips fill out the space in your ears. That's always something of a mixed prospect with any bud headphones, but I was generally pleased with the Audio-Technica ATH-CK3TW headphones' sound output across a range of genres, at least relative to their price point.

Going the full cheese pop route, Taylor Swift's "ME!" displayed plenty of bright pop tones, but then most headphones can handle standard overproduced pop music fairly well. There's a slight bias in the Audio-Technica ATH-CK3TW headphones towards higher tones, but not one that's overly problematic for most music types.

Switching to something a tad heavier, "Godzilla", from the Godzilla: King Of The Monsters soundtrack, managed to present that track's grimier guitar lines with reasonable fidelity; it's a track where lesser headphones can reduce those tones to more of a muddy output, but the Audio-Technica ATH-CK3TW headphones managed well there.

Switching back a few decades, the piano tones in David Bowie's classic "Life On Mars" kept their proper reverb, although they did struggle a little with the more complex sound mix in The Who's "Won't Get Fooled Again". They didn't struggle to a terrible degree for buds at this price range, but it was one noticeable area where the Audio-Technica ATH-CK3TW headphones showed their preference for more high tones. 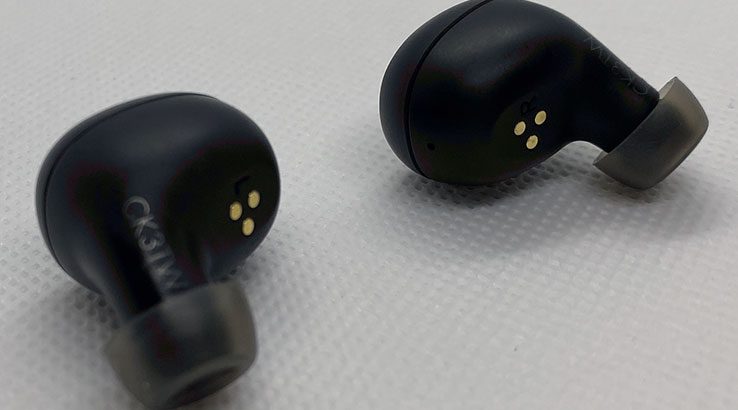 The Audio-Technica ATH-CK3TW headphones only feature a microphone on the right hand side bud, so I wasn't expecting great audio pick-up for calls in any case, especially as they lack any kind of external microphone array. I was pleasantly surprised with the few calls I made through them, with respondents indicating they could hear my voice quite clearly. However, there's an insane quantity of variance in voice calls that can depend on a lot more than microphone quality, so your experiences there may vary.

One feature of the Audio-Technica ATH-CK3TW headphones that I really didn't enjoy was the touch controls. They're simple enough in theory, with single, double or triple taps on the right bud to play/pause, skip forward or skip back and single and double taps on the left to raise and lower volume specifically.

However, they're something of a pain to use accurately. All too often, when I wanted to pause music, I'd end up skipping a track or pausing when I wanted to skip. It's noticeably more of a problem with the volume adjustment because the default tap is to adjust volume upwards, and I don't much enjoy being accidentally deafened when I'm seeking lower tones. It's also problematic for the double and triple taps on any ear because doing so always feels like you're deliberately trying to tap your own eardrum, which isn't that pleasant. 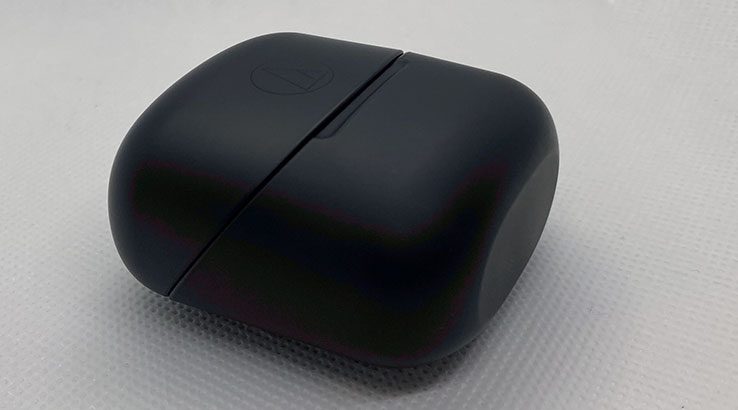 Audio-Technica rates the Audio-Technica ATH-CK3TW headphones as being good for up to six hours of playback, and I'd say that's a generally fair figure for real-world use, although not one that absolutely stands out in this particular market segment.

However, there is a caveat to that – actual in-case charging isn't all that brisk, taking around two hours if the Audio-Technica ATH-CK3TW headphones are entirely flat.

Unlike a number of headphones we've seen in this price range, charging is via USB-C, not micro USB, so you don't have to struggle with headphones plugged in the "wrong" way, and you can use your smartphone's charger to top up the battery case without having to take a custom charging cable with you on your travels. 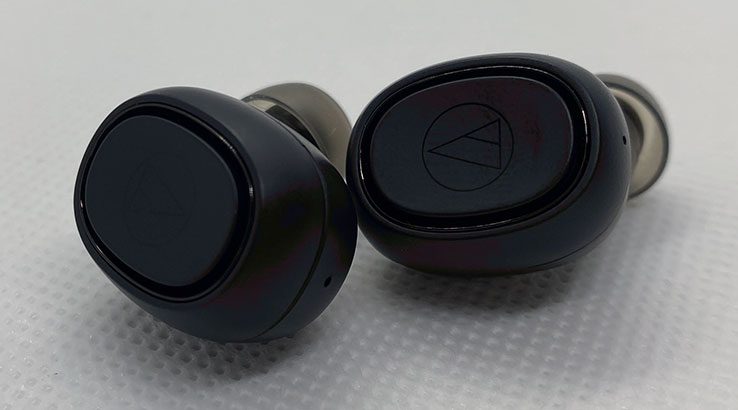 You don't have to look too far in the lower-cost Bluetooth bud market to be awash in choices, both from the big brands and brands you've never even heard of. 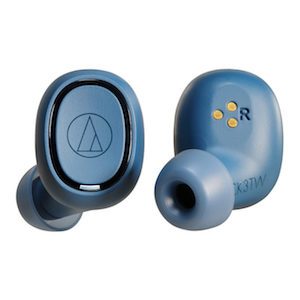