Attack on Titan: Wings of Freedom review: A faithful adaptation with some glaring problems

Wings of Freedom offers fans an enjoyable hack-and-slash experience that’s true to the source material, but those unfamiliar with the series may want to give it a miss.

All hope is gone. Huge soulless beasts known as Titans roam the landscape, devouring humans without any reason or remorse. Humanity as a species has nearly been wiped out.

Now, what’s left of the human race lives behind gigantic walls to separate them from the brutality of the lurking Titans. For the humans, they have finally found peace from the horrors of the outside world. For the Titans, humans have herded themselves in a convenient all-you-can-eat buffet. This is the world of Attack on Titan.

Omega Force’s Attack on Titan: Wings of Freedom is the first console release based on the anime and manga series of the same name. Releasing in Japan back in February, the Titans are finally marching to Western consoles this month. In Wings of Freedom, players will assume the role of various characters from the series, like Eren, Mikasa and Levi, as they defend their town from the towering Titans. Throughout the game, players will be able to level up each character and gain new abilities. Due to the game being confined to the narrative of the source material, some playable characters are barely used, meaning you don’t really get a chance to level them up. This becomes problematic later in the game when you’re required to use these underdeveloped characters in some pretty difficult conditions. Each character is equipped with a set of swords and their Omni-Directional Mobility (ODM) Gear (a grapple system of sorts), which offers fast and flamboyant mobility and enables you to effectively eliminate the Titan threat. Although new gear can be purchased at an in-game store, there isn’t a whole lot of variety. Aside from some visual tweaks, most gear feels more or less the same, with some equipment being completely overpowered.

Attack on Titan: Wings of Freedom is available for PS4 and Xbox One now.

Attack On Titan (A.O.T) Wings Of Freedom Xbox One Game

The combat style seen in the anime and manga transitions extremely well into the video game medium. Each level takes place in large open areas, such as towns or forests, which complements the use of the ODM Gear. Littered throughout each level are Titans of various shapes and sizes. Getting close to these behemoths usually ends with the player becoming chow for the grinning monsters. Naturally, the best course of action is to wipe that grin off their vacant faces with the arsenal at your disposal. In order to successfully kill a Titan, you must destroy its nape (a sweet spot on the back of their neck). Due to the danger each Titan poses in close-quarters, this is not an easy task.

In order to make the nape an easier target, you first have to dismember the Titan, restricting its movement and its ability to attack. Once you’ve lopped enough limbs, it’s a race to deliver the finishing blow, as Titans tend to regenerate lost appendages and quickly regain the upper hand (so to speak) if you’re not careful. If a Titan does manage to get its dirty paws on you, you will need to mash buttons until your character decides to cut the Titans fingers off. Generally, this isn’t that difficult and becomes more of a nuisance. You don’t need the superhuman button mashing skills that were essential in Metal Gear’s torture sequence, but it is still annoying and takes you out of the action. Taking down Titans is like a puzzle in itself and is hands down one of the most enjoyable parts of the game. Smaller Titans are generally easy to take down, due to their exposed nape, but as they increase in stature, so does the threat they pose. The larger Titans, sometimes known as Wall Titans, are a challenging adversary are not easy to put down. One alone isn’t too overwhelming but the situation can quickly get out of hand if you are not mindful of your surroundings. If a Titan notices you zooming around with your ODM Gear, it will chase you for quite a while and can be tricky to shake. This can often cause you to corner yourself with multiple Titans, a reliable way to get yourself devoured.

That said, the combat is easy to master and can be extremely fun when you’re zipping around, dodging and attacking Titans. Slicing off a few limbs here and there can also be extremely rewarding. It took me a while to become a Titan killing machine, mainly thanks to the confusing control scheme. There are some extremely odd button-mapping choices in Wings of Freedom, like crammed action buttons and the complete lack of R2/L2 mapping, that completely baffled me. Conventionally, actions games all have a similar button layout, X to jump, square to attack, you know how it goes. Attack on Titan completely changes up the traditional configuration and it takes a while for your brain to adjust to this new way of playing. AoT’s button layout eventually sunk in, but I would still find myself pressing the wrong buttons in the heat of battle, leading to a few cheap deaths.

It doesn't offer up much variety past the fun of, well... attacking Titans

One of my biggest problems with Attack on Titan: Wings of Freedom is that it doesn’t offer up much variety past the fun of, well… attacking Titans. The goals of each level are very same-same and it doesn’t take too long for it to become very repetitive. Each level consists of killing as many Titans as possible while also helping any comrade that is in danger. One level has the player frantically running away from the extremely agile “Female Titan”, while another has the player leading a friendly Titan to a base that is being assaulted by hostile Titans. These were refreshing alterations to the established formula, but they were short lived departures from a game that is 90% slaying Titans and saving friends. Due to the game following the anime so faithfully, Wings of Freedom never really goes anywhere unexpected. Because that’s what Attack on Titan is, soldiers zip-lining around a forest felling gigantic beasts. If the Omega Force had taken some creative liberties with the AoT universe, they may have been able to reduce the repetition by throwing some curveballs in terms of gameplay and plot. Alas, it wasn’t to be and the game is almost too faithful to the animated series. Luckily, the combat is engaging enough to make even the most repetitive levels an enjoyable romp the first few times around. Though there were fun times to be had with AoT: Wings of Freedom (especially as a fan of the series), there just isn’t enough to satisfy the avid gamer in me. The combat is extremely fun and at times, so very tense. However, the lack of mission variety, a convoluted control scheme, shallow levelling up systems and character restrictions become major detriments.

For fans of Attack on Titan, Wings of Freedom is a game that can be finished in just a few sittings and leave you satisfied. But the crux of my enjoyment and my ability to forgive some of the poor design choices stemmed from just that, my love for the original series. As its own experience, Wings of Freedom is just too hard to recommend to an audience unacquainted with the anime that spawned it. The asking price for Wings of Freedom is also a bit rich considering what’s on offer here. Considering the niche audience, I can’t help thinking AoT: Wings of Freedom would be better off as a cheaper digital exclusive, like 2014’s Legend of Korra.

We reviewed Attack on Titan Wings of Freedom on Xbox One with a copy provided by the publisher. 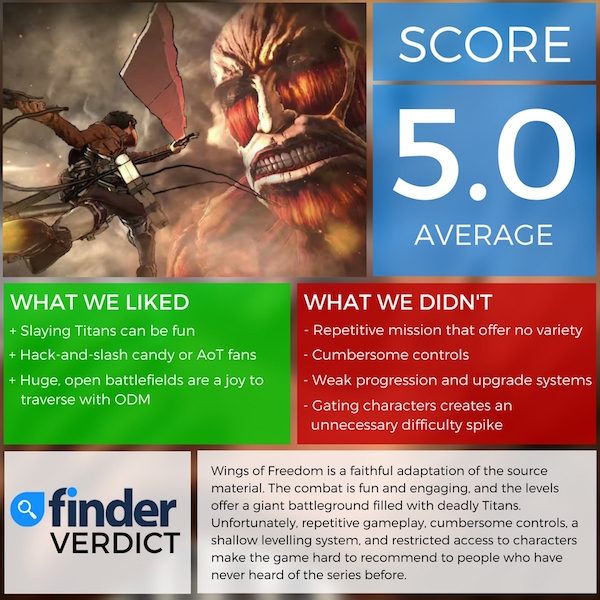 Thomas Duff was a contributor for Finder, specialising in technology and gaming.