Asus Vivobook Pro 16X review: Expensive but worth it

Quick verdict: A solid laptop for creatives who can’t afford a MacBook Pro or want to stay on the Windows side of the fence.

There are so many laptops on the market today that claim to be for "creators". And they don't specify exactly which kind of creation the machine is designed for or why that machine is better for them. What I like about the brand-new Asus Vivobook Pro 16X is specifies that it's for people who create images and videos using Adobe software, and its point of difference is a digital DialPad that gives more control over tools. 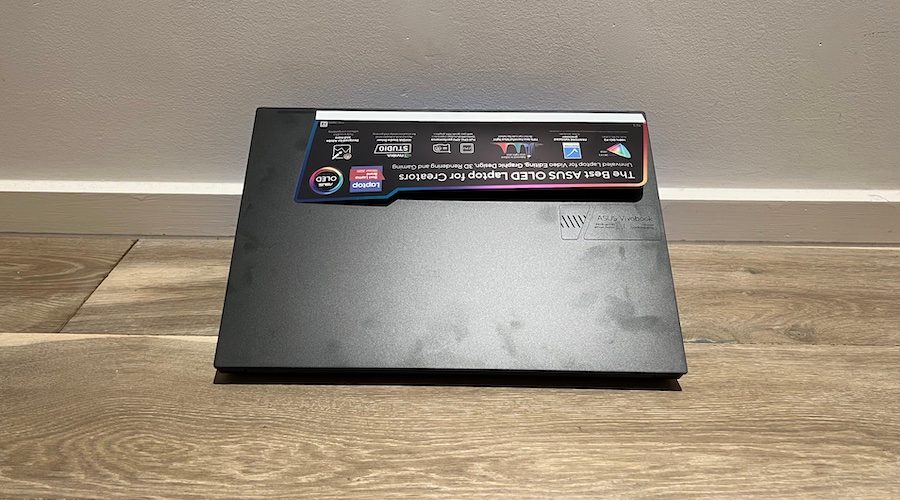 Before you open the lid, this might be the most aesthetically boring laptop I've ever seen. It's the kind of aesthetic design that wants you to think "yes, that is a laptop" and nothing more. There is a somewhat ugly piece of branding on the lid declaring it to be an Asus Vivobook, but it's not overly offensive and could be covered with a sticker, if you are so inclined.

The colour I reviewed the laptop in is called "0°Black" and it is definitely black. Perhaps it's not an interesting enough black to earn a non-sensical temperature designation. It's also available in meteor white and clone purple. Judging by the pictures on the website, "meteor" means "more grey than" white.

Interestingly, the website doesn't seem to have any pictures of clone purple so we'll just have to use our imaginations. I'm going to assume it's a light mauve, though I would hope they were bold enough to go full legally-distinct Cadbury.

Making a laptop look this boring is a bold choice, given it is aimed at creators who are presumably aesthetically inclined. Perhaps this is considered a safe blank canvas that won't upset designers too much, but I see it as a bit of a missed aesthetic opportunity. 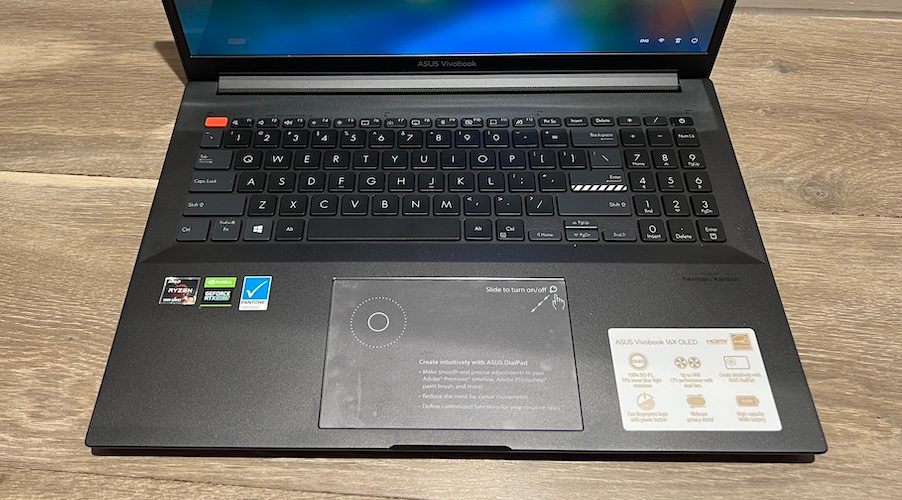 However, the keyboard is where some interesting aesthetic options come into play. The entire keyboard is black except for 2 keys. The Enter key has a striped lower fifth, reminiscent of a boater hat on a member of a barbershop quartet. The Escape key is bright orange, which is an entire mood unto itself and the most interesting thing to look at when the laptop is off.

It weighs 1.95 kilograms. Lugging it around is not enough to replace a gym workout, but it could certainly be used as part of one. With great power and a massive screen comes impressive weight, and that's the bargain we make each time we consider a fancy laptop. 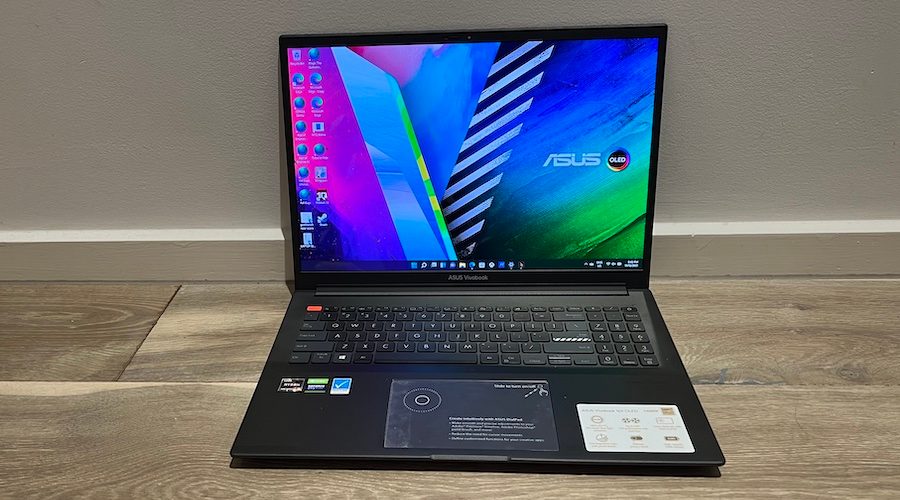 As far as the 15.4-inch 4K screen with a 16:10 aspect ratio goes, I think I'm in love. It's an OLED screen that has been Pantone-graded, so the colours are exact and everything just looks gorgeous. I can get lost in this screen. It looks like I could climb in and live in the images.

The extra height means that there's a bit of room for a toolbar when editing 16:9 videos in fuller screen, which is a good addition. Oddly though, it's not an especially bright screen. Even at full brightness, it's no match for a bright summer's day in the park. It's fine in a standard office environment or next to a medium window.

That lack of brightness isn't the only odd choice, and this one highlights why one should be specific when discussing a laptop for "creators". Which do you think is more important for creators: a numpad or speakers that both sound good and go loud enough so you can clearly hear unmixed or muffled audio on footage you're currently editing? The answer is both, depending on what you're doing.

A numpad is handy for shortcuts, but you need those speakers too. Most of the time you'll edit with headphones, but a $3,000 laptop for professional creatives needs to be versatile, and these downward-firing speakers on the bottom of the case just don't get enough volume for imperfect audio. 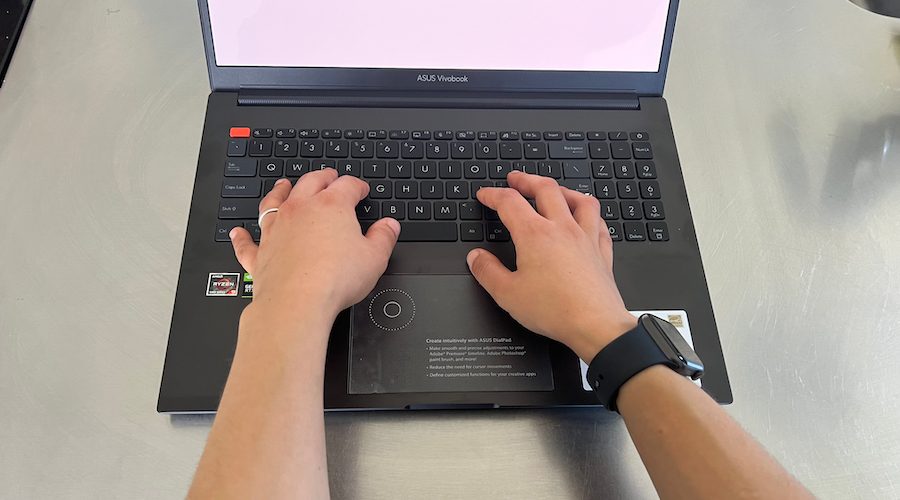 Because this is a powerful beast, the performance is as impressive as one would need it to be for creative tasks. It doesn't quite hold a candle to the M1 Max 16" MacBook Pro, but that's also a $6,000 laptop, putting it in another category. For the price, the Asus Vivobook Pro performs extremely well. I did some light gaming and light video editing and at no time did I feel like the hardware was letting me down.

With the PCMark10 benchmark, it's clear to see that it's not as powerful as an expensive gaming laptop, but for Adobe applications, it really doesn't need to be.

The Geekbench 5 CPU Single Core and CPU Multi-Core tests are a bit more helpful, as is the 3DMark Time Spy test. Even though this laptop isn't for gaming, it is for graphics-heavy applications, so it's still relevant. The scores mirrored my experience, showing it to be near the top of the line in CPU power, but not a machine for gaming.

For the battery, I was quite impressed. The Vivobook Pro 16X didn't break any records, but nearly 13 hours on the video test is more than enough time to get stuff done. When I was using the laptop I made sure to plug it in each night, but I was never prompted to plug it in while working during the day, making me feel like I could really depend on it if I ever needed to take it to a studio or into the field.

The table below shows how the battery compares to other laptops.

The star of the show is the DialPad, which is a kind of tool wheel you can use on the trackpad. I found it best to use a separate mouse in my right hand and operate the dial with my left. Going between the dial and the touchpad cuts down on any efficiency earned from the dial, but it works in a pinch if you don't have access to a desk on a shoot. The DialPad will take a lot of getting used to, but power users of Adobe software will no doubt love it once they adjust.

The Asus Vivobook Pro 16X is a powerhouse laptop for creatives who use a lot of Adobe programs and want a boring but stable workhorse that they can rely on. It's not the most exciting laptop in the world, but it has a beautiful screen and a unique feature that will appeal to power users. At $3,099, this top-of-the-line model isn't exactly cheap, but I think it's priced well for what it is. The Asus Vivobook Pro range is full of options and comes in at different price points. I reviewed the top-of-the-range Asus Vivobook Pro 16X M7600Q, which boasts an AMD Ryzen 9 5900HX Mobile Processor, NVIDIA GeForce RTX 3050Ti graphics card, 32GB of RAM and a 1TB SSD, which retails for $3,099. There are also Intel models and the 16X range starts around $2,000, with 14X models also available.

Given its performance, I think the price is reasonable, and there are enough options in the range to keep a variety of creatives happy. I spent a couple of weeks playing games like Age of Empires and Wingspan, editing videos in Camtasia and messing around in Photoshop. I was loaned this laptop by Asus PR.