ASUS's ROG Zephyrus G15 breaks some established rules of the gaming laptop space, but in a good way. For a gaming laptop of its size, it's surprisingly light in carrying weight, but it's got enough heavy duty firepower to handle the most demanding games.

The one area where it doesn't break the rules is in battery life, where it struggles once you remove a steady source of power for any gaming task. 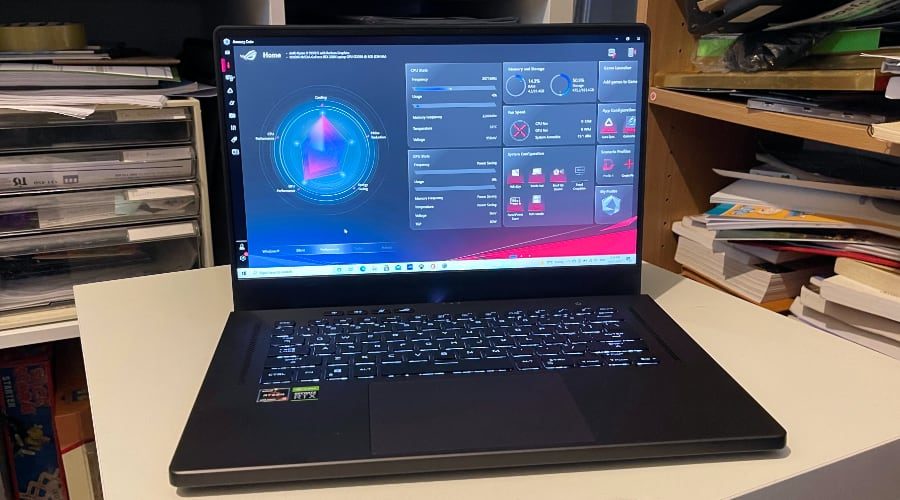 Like most 15-inch gaming laptops, you could never accuse the ASUS ROG Zephyrus G15 GA503 of being small.

What's really surprising is how non-bulky it feels when you pick it up. Larger gaming laptops tend to be the whales of the laptop world, but the ASUS ROG Zephyrus G15 GA503 weighs in at just 1.9kg. That means it's actually a suitable option for anyone wanting a high-powered laptop for any purpose, not just as a gaming laptop.

The top frame of the ASUS ROG Zephyrus G15 GA503 features a pinprick design across roughly half of its space. It's not a design I personally like all that much, because the rainbow effect it creates feels weirdly like early 1980s "futuristic" tech products, but it also means that it doesn't quite look like a "standard" RGB-overdrive style gaming laptop either.

Open up the ASUS ROG Zephyrus G15 GA503 and you're faced with a more classic gaming laptop look, with an RGB backlit keyboard sitting above a generously sized trackpad.

The 15-inch display on the ASUS ROG Zephyrus G15 GA503 has minimal bezels, and for the model reviewed, a 2560x1440 resolution and support for up to 165Hz. Sure, it's not quite 4K, but that kind of resolution can work quite well for gaming systems where you don't want to burn too much power on the go. 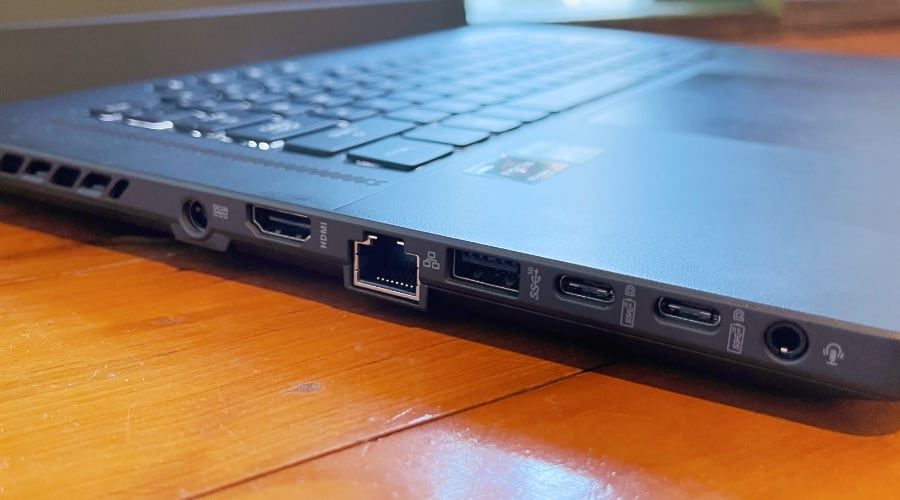 The keyboard and body of the ASUS ROG Zephyrus G15 GA503 sits quite distinct from the upper screen, with nicely positioned ridges at the top that look good and assist in cooling the laptop during heavy use.

As is common with so many of these systems, there are pre-set ridges on the base to slightly raise the ASUS ROG Zephyrus G15 GA503 when on a desk. They're not as pronounced as on some models, so they're mostly comfortable if you do game with your laptop on your actual lap.

The port layout of the ASUS ROG Zephyrus G15 GA503 is a little odd. Nearly everything peripheral sits on the left-hand side, including power, ethernet, HDMI, 2 USB C ports and a single USB A type port.

Flip to the right-hand side, and there's a single USB A type port and micro SD card reader. It's an odd balance if you don't want all your peripherals hanging off the one side of the laptop. 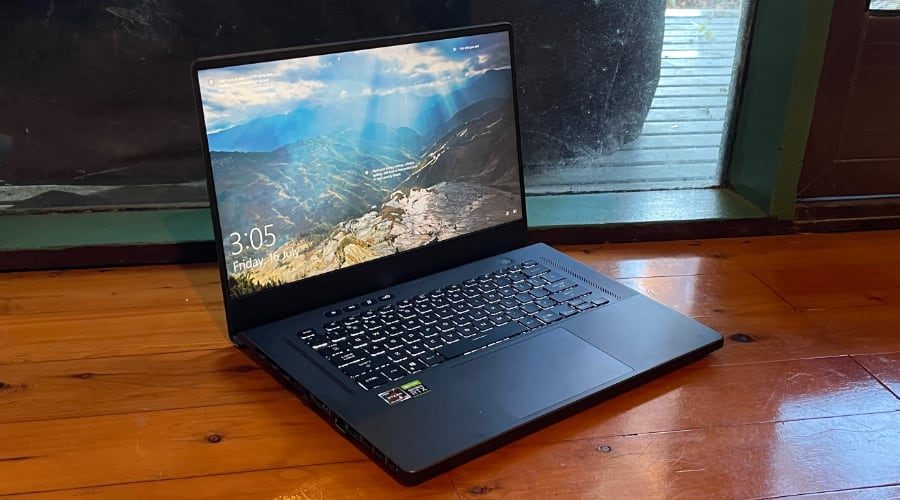 The model of the ASUS ROG Zephyrus G15 GA503 as tested was the premium end model; that's a very standard play for review models where brands want to show off the best possible performance, so bear in mind that if you do opt for a lower cost variant, you won't quite hit these high points – although you will save some money in the process.

The ASUS ROG Zephyrus G15 GA503 is only slightly bested by the larger Alienware laptop, but I can tell you without a doubt which I'd prefer to have on my lap or be actually lugging around. That power difference isn't going to be massively apparent in actual in-game use, where the ASUS ROG Zephyrus G15 GA503 delivers fast and responsive gameplay with the benefits of that top-quality display.

ASUS provides its own configuration utility, as most gaming laptop makers do, so you can tweak the ASUS ROG Zephyrus G15 GA503 to your own needs. If you're less keen on precise tweaking, there's a range of pre-sets to cover gaming needs such as FPS, Racing or RTS games.

With an eye to the fact that you might spend some time with the ASUS ROG Zephyrus G15 GA503 not playing games, there are also pre-sets for cinema viewing or web browsing as well.

While most gamers will likely opt for an external gaming mouse or controller, the ASUS ROG Zephyrus G15 GA503's keyboard is quite well suited for heavy gameplay, with good actuation and, because it's a gaming keyboard, RGB backlighting. My only complaint here is that there's a lot of space around the keyboard and the rest of the frame, and ASUS might have been able to space out the keys a little more, especially for those smaller arrow keys.

Gaming laptops do not have the best reputation when it comes to battery life, and that's not surprising in any way. If you're building a system for gaming, while larger physical size does allow for more battery space, the needs of high-end GPUs and CPUs will tend to suck away those electrons almost as fast as you can supply them.

The ASUS ROG Zephyrus G15 GA503 ships with a 90Whr battery that ASUS claims is good for up to 14 hours of video playback.

As always, battery life on laptops is 100% dependent on the applications you're running. To assess laptop battery life, I ran the ASUS ROG Zephyrus G15 GA503 through our dual battery test suite. Firstly, it was tested with a Full HD video looping at maximum brightness and moderate volume to battery exhaustion. That's a lighter test designed to give a best case scenario. Then I threw PC Mark 10's gaming battery test at it to get a feel for the lower end of the scale under heavy usage.

Here's how the ASUS ROG Zephyrus G15 GA503 compared on those 2 tests:

It turns out that the price you pay for that lighter carrying weight on the ASUS ROG Zephyrus G15 GA503 is somewhat compromised battery life, especially if you do want it to be a portable gaming rig.

For video playback it only just ticked over 10.5 hours, short of ASUS's claims, and for gaming performance it delivered the lowest score in its class.

Should you buy the ASUS ROG Zephyrus G15 GA503? The ASUS ROG Zephyrus G15 GA503 has a lot going for it. You get the power you'd expect out of a gaming laptop, but in a shell that doesn't entirely scream that fact to the world. That gives it more flexibility in terms of application use, because you really could slide this just as easily into a meeting as you could a LAN party.

Cost aside, and that's always an issue for premium gaming laptops, the one big catch with the ASUS ROG Zephyrus G15 GA503 is its battery life, which really struggles under heavy loads. If you do want and need to game (or run other heavy duty applications) away from a power point for serious time spans, this isn't the laptop for you. Buy at AmazonBuy at Bing Lee

The ASUS ROG Zephyrus G15 GA503 was evaluated over a 2-week period, including benchmarking, battery testing, game testing for frame rates and screen fluidity, as well as general usage tasks to assess its overall value.