Quick verdict: If you want a laptop that looks flashy as hell, then the ASUS ROG Zephyrus Duo 16 will fit the bill. The bill is very high, however, and you may be better off with a more regular laptop design. Most notebook designs follow predictable patterns, even in the gaming world. You can expect heavier notebooks there with superior GPUs, a whole smattering of RGB lights and fast refresh rate screens. The ASUS ROG Zephyrus Duo 16 hits all those notes, but it still defines itself around that dual screen idea.

But it's a secondary display taking up a lot of keyboard space and commanding a premium price point.

Its 2022 iteration is a fine gaming machine, but it's a hard one to justify unless you really must have that second screen – and can't otherwise create a secondary display for your streaming or productivity needs. 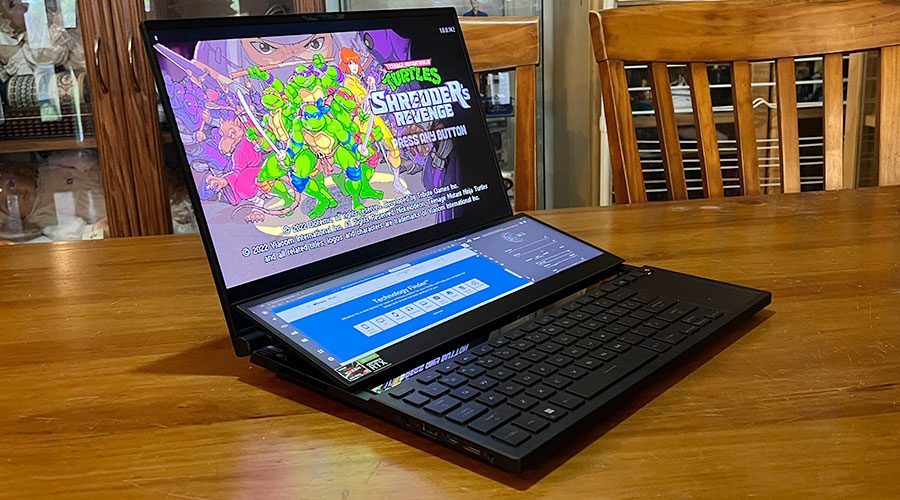 The ASUS ROG Zephyrus Duo 16 is, like ASUS' other Republic of Gamers (ROG) laptops, primarily pitched at a gaming crowd.

Its defining characteristic is its secondary display, which sits below a primary 16-inch screen, providing a "ScreenPad" display measuring in at 14 inches diagonal with a 3840x1110 pixel resolution.

That does give you a lot of screen real estate, but then like any other large gaming laptop, it makes it more of a luggable proposition than a truly portable one. You'd sure as hell get a solid workout if you had to carry the ASUS ROG Zephyrus Duo 16 around all day.

From a visual perspective, the second screen and the little row of circuitry it reveals as it slides up is cool as hell. If all you want is a laptop to impress people with when you open it up, then the ASUS ROG Zephyrus Duo 16 will 100% fit the bill. 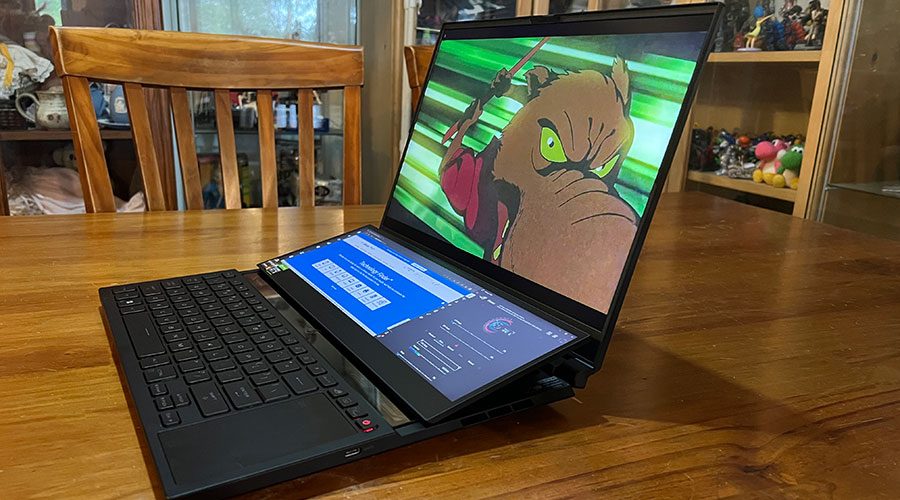 It's a gaming laptop, so of course RGB lighting is built in, but I'll leave it to your own judgement as to whether or not that still counts as cool.

You're certainly not left wanting for connectivity, although you may have to hunt around to work out where it all is, because the only side of the ASUS ROG Zephyrus Duo 16 that doesn't have a port of some sort is the front.

Basically, the ASUS ROG Zephyrus Duo 16 should be capable of being all things to all users with minimal fuss.

The need to accommodate the secondary screen gives ASUS a lot less space to play with when it comes to the keyboard. Despite the size of the laptop, there's no embedded number pad, because where you'd expect to find it is where the trackpad is.

I can't imagine too many gamers not opting for a really decent gaming mouse instead, to be honest. It's very much a taste matter, but years of expecting a mid-laptop trackpad meant I was always getting the placement of the weirdly vertical trackpad wrong during use. 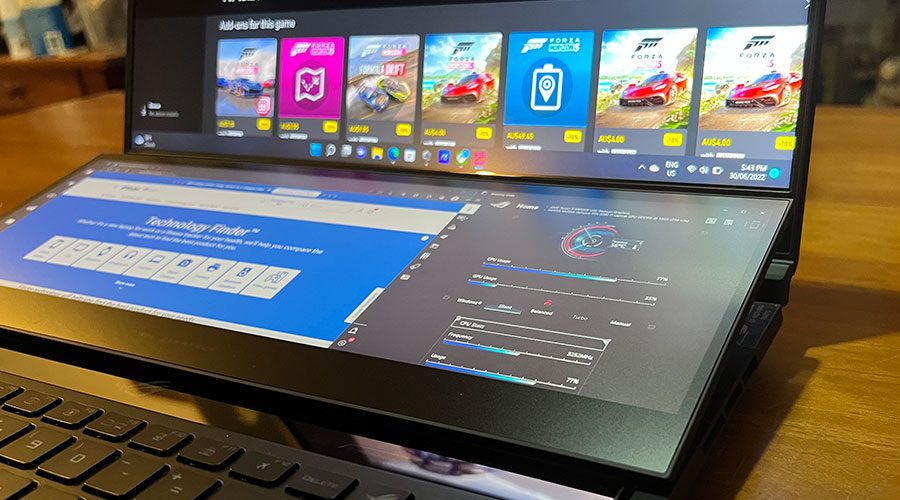 The 2022 model of the ASUS ROG Zephyrus Duo 16 runs on AMD's Ryzen 9 6900HX Mobile processors, although like much of ASUS' output, there's a range of other configuration choices that will seriously impact on both performance and price.

You can pick from a range of NVIDIA GeForce RTX GPUs, starting at a 6GB RTX 3060 and moving all the way up to a 16GB RTX 3080 Ti, which was the model I've tested with. RAM is set at 32GB across all models.

That's a recipe for some pretty special performance, and in a benchmark sense, the ASUS ROG Zephyrus Duo 16 did not disappoint:

The competing MSI Raider turned up on my test bench while deep in the review of the ASUS ROG Zephyrus Duo 16, so it seemed only fair to include its scores.

While the ASUS ROG Zephyrus Duo 16 doesn't top the charts, performance is still very impressive, which is 100% what I'd want to see from a laptop that costs this much.

It's benchmark performance that does equate out to real world performance as well, with the ASUS ROG Zephyrus Duo 16 never missing a beat across multiple gaming sessions. To give that some context, here's how it ran with Forza Horizon 5's benchmark test, which tries to set up graphical constraints based on your PC's abilities:

You can't miss that fact, because if the ASUS ROG Zephyrus Duo 16 is on your lap, you will notice both the heat it puts out and the noise of the fans it uses to stop itself frying its internal components, or your legs. However, that's very much par for the course for larger gaming laptops.

I do like the fact that the ASUS ROG Zephyrus Duo 16 exists with its second screen, but I'm not entirely sold on its overall utility.

It feels like a niche product, because if you just wanted to (for example) follow a social stream while gaming, you could easily do so from an external monitor – quite likely a cheaper proposition than the ASUS ROG Zephyrus Duo 16's premium price as well – or via a phone or tablet.

It would be great for showing off at public events, because there's really nothing like it – but is that enough reason to buy an even more expensive gaming laptop? 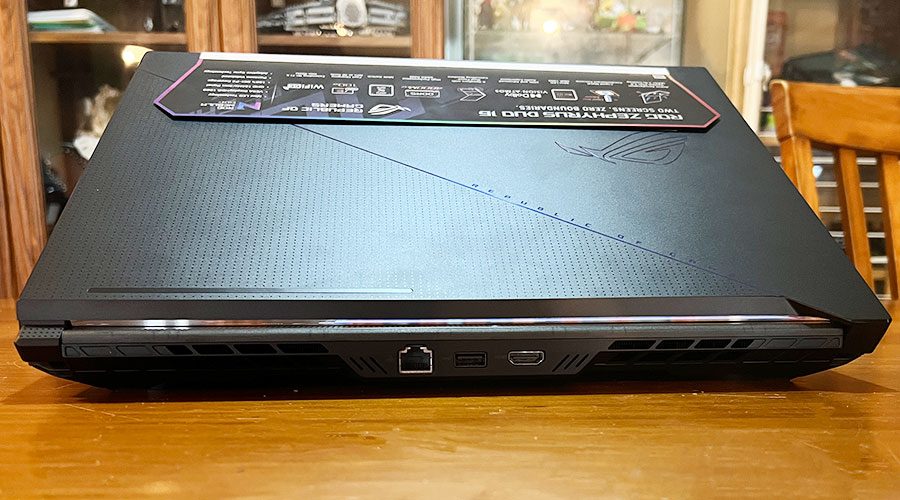 Most huge gaming laptops have woeful battery life. There's just no getting around it, because it you pack in high performance parts and fast displays, it's going to take its toll on even the heftiest battery.

ASUS packs a 90Whr battery into the ROG Zephyrus Duo 16's hefty frame, with the promise that it can "keep you powering through work all day long".

I suspect that ASUS is using a pretty low-level definition of "work" here, especially considering this laptop's gaming status. 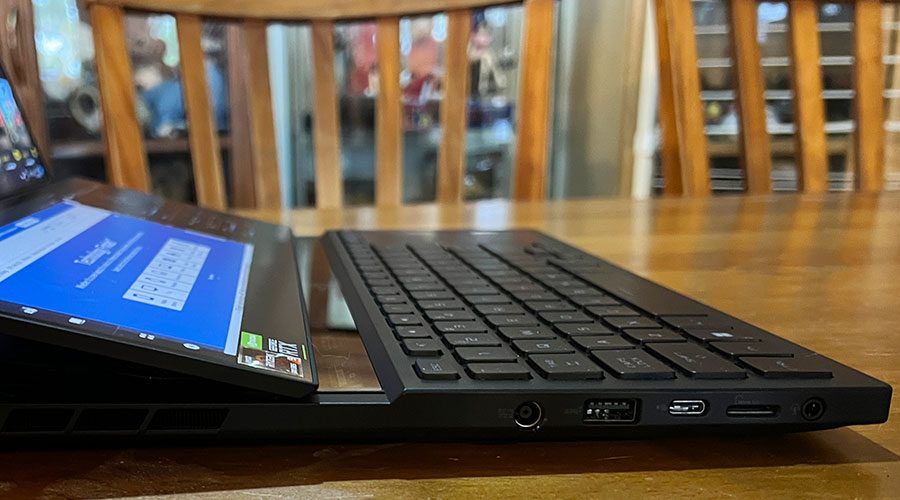 The best way to sort that out is to test it, so first I put it through our standard suite of battery tests, streaming video to simulate a light usage environment, and using PC Mark 10's battery test to cover a more intense use scenario. Here's how the ASUS ROG Zephyrus Duo 16 compares:

The ASUS ROG Zephyrus 16 Duo's video time of just over 7 hours might qualify as a working day, but only if you're using it very lightly indeed. Push it in any way hard, and it falls straight down the very predictable hole of gaming laptop performance.

While its battery life isn't brilliant, the ROG Zephyrus 16 Duo does at least support fast charging from its supplied (and equally massive) brick charger, or USB C charging via a PD compliant charger.

The ASUS ROG Zephyrus Duo 16 is a powerful, capable gaming laptop that is sure to attract eyeballs whenever you unfold its primary screen. It's unavoidable, because basically nobody expects to see an extra screen on a laptop.

However, it's an expensive proposition, and one that really is only going to work if you need dual screens and can't otherwise accommodate those kinds of needs through a second desk display, or even a mobile or tablet device while out and about.

For most gamers, you'd arguably be better placed putting that extra cash into getting better specs on a regular laptop.

The ASUS ROG Zephyrus Duo 16 as tested retails in Australia for around $5,999, although some lower specification variants sell for around $4,300 at the time of writing.