Is this a return to the series' (Greek) salad days?

Much like the eponymous cut-throats of this series, 2017's Assassin's Creed Origins was a killer success that I never saw coming. Ubisoft reminded AC fans that after nine major games, and a downward trend in quality, it could still talk the talk and walk the walk (like an Egyptian this time). Today's follow up, the Ancient Greece-inspired Assassin's Creed Odyssey, has some pretty big sandals to fill. That said, while Origins was a massive franchise overhaul, the innovation department here feels a little spartan. 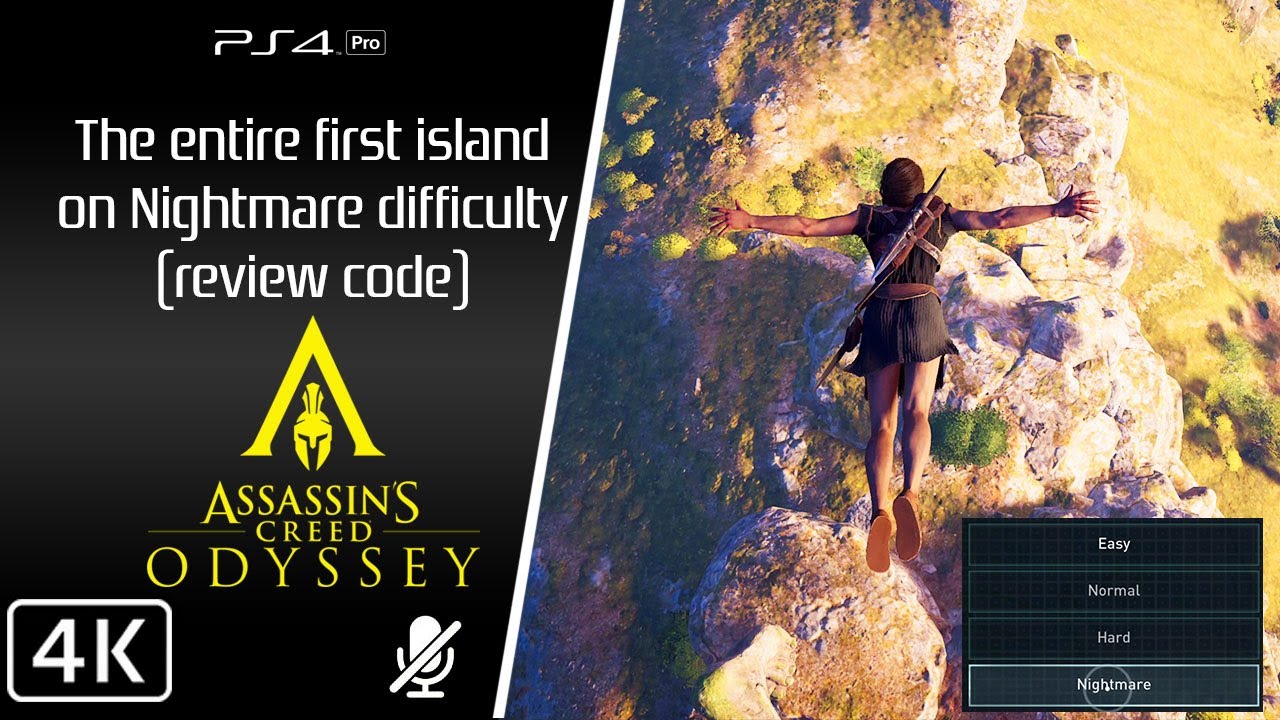 But make no mistake, completionists will be getting an Iliad-sized journey for their hard-earned drachmae. I'm certainly no stranger to sprawling open-world RPGs, but Odyssey is intimidatingly large, both via the surface area of its Peloponnesian playground and the fact that it offers two selectable heroes (Alexios or Kassandra) who have multiple endings. Throw in a choice-driven dialogue system (a first for the series) and you're looking at a campaign with a lot of permutations and value for money.

However, die-hard fans will need to focus hard on those marketing bullet-points because while Odyssey almost over-delivers in content and longevity, it underwhelms in terms of bona fide new mechanics. Almost everything good about the game-play experience is either inherited from Origins with a slight tweak or is a bolt on from a past AC adventure.

Take the lovely naval warfare for example. Origins relegated it to a sprinkling of constricted side-sail moments. Odyssey makes a glorious return to a full, AC Black Flag experience where an open Aegean sea is at your fingertips and just over the next wave is a leaping whale, a fleet of enemy ships or some other arr-rated action – like sunken booty retrieval.

Now, I love being on a boat (to the point where I often brag about my nautical-themed pashmina afghan), but even I felt a disappointing sense of deja vu here. Aside from the ability to press gang NPCs into becoming new ship lieutenants, my Greek trireme felt like a skin swap of my old Jackdaw galleon. Also, the similar set of ship upgrading wrinkles return. Arrows and spears replace cannons. Yeah. Been there, swashbuckled that. 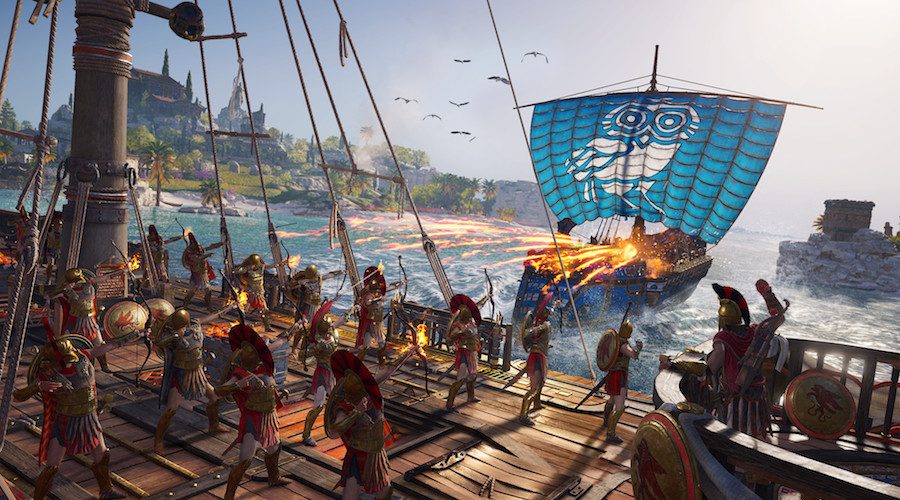 Likewise, your assassin's personal progression and combat systems are shuffles in different directions rather than bold leaps of faith into true evolution. To become more effective, you'll need to level up and spend points in one of the three main perk categories: Hunter (range-related skills), Warrior (toe-to-toe brawling) and Assassin (live to shiv). Interestingly, some high-level weapons boost damage stats tied to each of these disciplines, so it pays to specialise.

Aside from a cool Spartan kickback move (that doesn't really work on bigger enemies, which is annoying), I wasn't blown away by the perks on offer. The most effective (and ludicrous) of the bunch is Leonidas' Spear. It lacks a haft but you can still somehow hurl it with laser accuracy to effectively teleport yourself across the battlefield, chain-murdering unaware guards. It doesn't feel grounded in any sort of reality, but it is fun.

When it comes to combat, Odyssey is a solid rehash of Origins, but why Ubisoft chose a game set in Ancient Greece as THE moment to remove all shields from the player is quite beyond me. Yes, eliminating the turtling makes for zippier brawls that reward timing and parries, but the protagonists are Spartans, known for "fighting in the shade". Hell, this game even apes the famous quote from 300: "Come back with your shield, or on it!" Can't, bro. Ubisoft won't give me one. Not even a bin lid – even though every second enemy of mine has one. This is madness worthy of Sparta.

Speaking of 300 and Thermopylae-like chokepoints, I took issue with a number of deliberate progression bottlenecks in the campaign. On a respectable difficulty setting, most every other RPG out there will have the good sense to scale the main path to your level (to a certain degree), ensuring you can do a grief-less run through with little need to grind up XP doing menial crap.

Not only does Odyssey refuse to do that, but it also loves to drop you into what I like to call "toll station" missions in which you're confined to a battlefield where no guile or cunning can get you through. This is a test of raw numbers. If you aren't up to the level needed to go toe to toe and deliver a ton of DPS to many attackers within a time limit – whomp-whomp – mission failed. 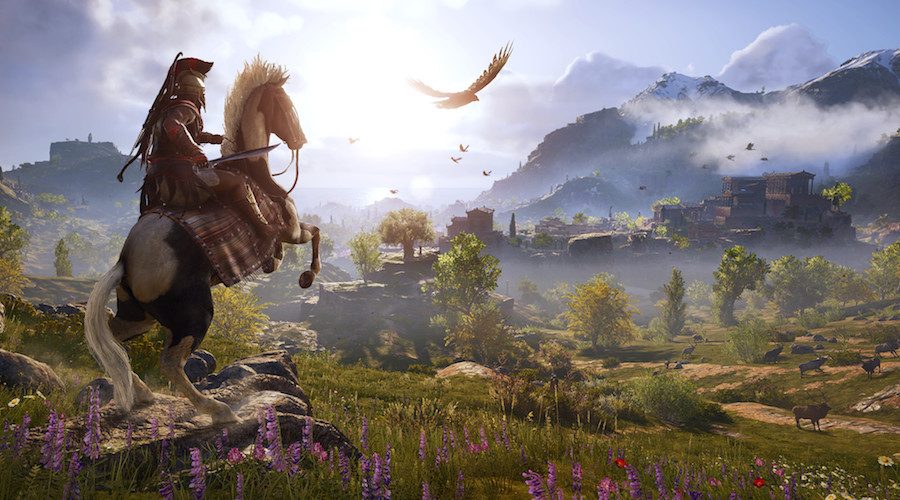 Not beefy enough? Bugger off and go grind for 45 mins, player. Or, hey! Have you thought about buying our Permanent XP Booster?! It gives you 50% more XP all the time! Only [insert exorbitant Earth dollars price] while stocks last!
But I digress. Nickel and diming aside, I still enjoyed Odyssey outside of the mire of the third act slog. I'll not spoil too much of the plot here today, but I will say that both Alexios and Kassandra are likeable protagonists who lean towards Ezio's braggadocio, rather than the seriousness of Origins' Altair-leaning Bayek. Their dark pasts offer a bunch of neat twists and I was hooked on the main thread to reunite them with people from their former lives, while also uncovering the machinations of a network of proto-Templars.

I should also mention that the latter task manifests as a series of many, many side-quests, all tracked in a menu page that looks like you're playing a murder-filled game of Guess Who. It's more or less the same deal for mercenaries, except your targets are actively trying to track you down this time. I dig the similar Phylakes threats we had in Origins, and I love how the mercs here keep the action dynamic (as they love to spawn in the middle of a boss fight). But in other ways, this feels like a half-baked borrowing of the Nemesis system of Shadow of Mordor. At the time of writing, the frequency and ferocity of mercs (and their Darth Maul ability to sniff you out of hiding) is tuned to distraction and irritation rather than fun and challenge.

In the end, while you can usually count on me to be a fan of Spartans, assassins and Spartan assassins, I have to break phalanx rank here and say that Assassin's Creed Odyssey is too safe. Is it massive and gorgeous? Yes, though a few of the old Animus AI and animation hiccups still pop up. Does it offer nearly triple-digit hours full of great narrative and historical fan-service? Aye, it does. This is a tale that could one-up the mighty Odysseus himself and you'll delight in meeting all your favourite philosophers – including that guy called So Crates.

Ubisoft has undoubtedly delivered something quite good here. It could have been elevated to great, though, had this developer dialled back the level grind and the greedy lean to microtransactions. Speaking for myself, they went down like a Spartan kick to the Testikles. (Who, hilariously, is an actual dude in this game.)

We reviewed Assassin's Creed Odyssey on PC with a copy provided by the publisher.

We love the setting, the heroes, the branching narrative and the return of true naval warfare. We are less enamoured with deliberate grind tactics, a few poorly-tuned systems and a lack of mind-blowing new wrinkles.

For more information on how Finder scores games, check our review guidelines.

World of Warcraft: Battle for Azeroth review WoW Factor: How a young Aussie got to have a hand in the epic Battle For Azeroth