Separating the good from the bad: Why ASIC’s crackdown will be good for the payday loan industry

The rumbles started in February 2016. The Australian Security and Investment Commission (ASIC)’s landmark case and subsequent win against The Cash Store saw a much-denied but recognisable change in what is one of Australia’s fastest growing financial sectors — payday lending.

Are you struggling financially?

If you're struggling financially and would like to speak to someone for free financial advice, information and assistance you can call the Financial Counsellors hotline on 1800 007 007 (open from 9:30am to 4pm, Monday to Friday). If you are suffering financial problems related to the coronavirus pandemic you may be eligible for additional support.

Do you really need a loan today?*

It can be expensive to borrow small amounts of money and borrowing may not solve your money problems.

Check your options before you borrow:

The Government's MoneySmart website shows you how small amount loans work and suggests other options that may help you.

* This statement is an Australian Government requirement under the National Consumer Credit Protection Act 2009.

The case against the Cash Store, whose leases were acquired by Money3 in 2013, found that the short-term lender engaged in unconscionable conduct by selling what was deemed to be useless insurance to borrowers. Loan protection insurance was being sold to unemployed borrowers to protect them in case they lost their job, and other issues of this nature.

But this is only one lender — so what have the implications been for the rest of the industry? If the latest report from ASIC has shown us anything, it’s that small ripples can cause much larger waves.

The report from ASIC

Payday lenders put on notice, one headline cried, D-Day for payday lenders, another one called. The ASIC report was on the horizon: the media forecasted the end while lenders continued with business as usual. For some payday providers, this has meant that they had nothing to worry about. They simply provide short-term financing to those who need it.

And so D-Day has come. ASIC’s report, Payday lenders and the new small amount lending provisions, details a review of 288 payday lenders operating in the Australian market (approx. a 75% share) and their lending guidelines. The report was damning to say the least. Following on from the results outlined in this report, ASIC mentioned that they’ve followed up with specific lenders that were reviewed in the report regarding specific concerns. Continued monitoring of lenders is cited as a goal, as is a review which is to take place after 1st July 2015. The report has drawn significant media attention and stories have come to light of lenders acting unconscionably, preying on vulnerable borrowers and approving loans for those who can't manage repayments.

There have been reports of lenders approving loans for those who are already repaying several loans, and also reports of those lending to those on very low incomes. Cash Converters only requires borrowers to have 15% of their income remaining for living expenses when calculating 'fair repayments'. In short, something's got to give.

The effect of the industry cap

Prior to July 2013, payday lenders could charge much higher rates and fees than is currently allowed. Following the introduction of the Enhancements Bill, which amended the National Consumer Credit Protection Act 2009, ASIC introduced a market-wide cap on payday loans. The cap, which now stands as an establishment fee of 20% and a 4% monthly fee, was originally meant to be much lower — half, actually. 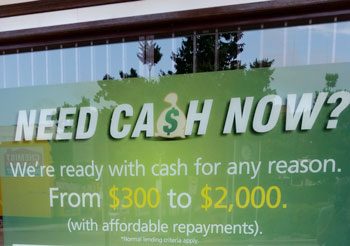 The proposed fee structure of a 10% establishment fee and 2% monthly fee was vehemently opposed by lending giant Cash Converters, who got their customers in on an ad campaign that protested the legislation. As the Game of Loans (1st April 2015) report on Four Corners pointed out, these customers were essentially protesting legislation that would make their loans cheaper, all because it would price one lender out of the market. The cap, as mentioned, came into effect halfway through 2013, and applied to loans of $2,000 and below with loan terms of between 16 days and one year.

In the recent ASIC report, they showed that new entrants continue to apply for credit licences in the payday market despite the cap (68 licences were granted between 2012-13 and 64 between 2013-14). In terms of existing lenders, ASIC states that approximately 70% of payday lenders reviewed had diversified their product offerings following the introduction of fee caps. Despite the restraints of the cap the industry continues to grow, but ASIC said it is difficult to determine the actual size. Payday lenders currently represent approximately 0.4% of the total consumer credit market in Australia.

What the ASIC crackdown means for you

Ten million Australians currently have no access to credit cards. Even people on high incomes may have trouble accessing credit. Say what you will about payday loans, but they are filling a societal need. People in need of credit and are sometimes left behind by more traditional lenders due to them having lower incomes, bad debts or negative marks on their credit files. It’s not only people with good credit and high incomes who mismanage finances one month or have emergency expenses come up — our society runs on credit, and those who can’t access it are left without a safety net.

At the moment, payday loans are among the easiest sources of credit people can turn to. The ASIC reported has highlighted that this industry is fraught with problems, but that it is also a popular source of credit.

Just like the introduction of a cap on fees has led to a safer lending environment, so too will continued reform and monitoring of the industry improve standards and work to making payday loans more of a justifiable credit option for borrowers on the fridge.

The need is there — bad credit doesn't mean no credit is needed, and low income doesn't mean these people don't need additional financing from time to time. The trouble is these people are often the most vulnerable, and more likely to be sent into a spiral of re-borrowing and debt. ASIC continues on a path of payday reform that can only mean good things for the industry, and for the borrowers that so heavily rely on it.

Elizabeth Barry is senior editor for Finder's global financial niches. She has written about finance for over six years and has been featured in a range of publications and media including Seven News, the ABC, Mamamia, Dynamic Business and Financy. Elizabeth has a Bachelor of Communications and a Master of Creative Writing from the University of Technology Sydney. In 2017, she received the Highly Commended award for Best New Journalist at the IT Journalism Awards. Elizabeth's passion is writing about innovations in financial services (which has surprised her more than anyone else).